Only if you’re a cook who has been in a cave for the last 30+ years do you have an excuse for not feeling the inﬂuence of the incredible body of work by legendary cookbook author, food writer and “Mediterranean Queen,” Paula Wolfert.

And, if you live in the Boston area, you will have a chance to experience Oleana Chef Ana Sortun recreating Paula’s magic with a cooking class on Monday, June 5, celebrating Ana’s mentor and the new biography about Paula by Emily Kaiser Thelin, titled Unforgettable: The Bold Flavors of Paula Wolfert’s Renegade Life. Chef Ana will demonstrate a few of Paula’s recipes from the book, including Mussels Saganaki, Sprinkle Pie, Bulgur Blended with Greens, and Balkan-Style Kebobs.

Emily Thelin was Paula’s editor at Food & Wine magazine, and traveled to Morocco to meet her after Paula spent a week with Oldways and Ana for a Culinaria in Marrakech and Fes. When Emily moved to northern California, near Paula, they became great friends. After Paula was diagnosed in 2013 with Alzheimer’s disease, the idea of a biography of Paula seemed essential. While publishers didn’t agree, friends started a Kickstarter campaign. With funds raised, the book took shape, and it was just published this spring.

I was lucky enough to be interviewed for this book, answering questions about Paula’s participation in many of the Oldways Symposia throughout the 1990s, as we helped to introduce Americans to extra virgin olive oil, the Mediterranean Diet, and Mediterranean ingredients and preparations.

Traveling with Oldways from Porto Carras, Greece and Barcelona, Seville, and Madrid, Spain; to Tunisia, Morocco, Puglia, and Crete, Chios, and Lesbos, Greece, Paula enlightened leading food writers, other cookbook authors, chefs, food retailers, importers, and scientists. She shared the “how-to” of exotic ingredients and preparations like hand-rolled couscous on the Island of Jerba (of Jabba the Hutt fame), Tunisia, or the preferred route to ﬁnd snails in the Djem el Fna market in Marrakech.

One thing that stood out to me is Paula’s special talent for weaving a story around each dish and each ingredient. Her stories bring a place, a cuisine, an ingredient, or a dish to life — she makes them approachable for all. As Ari Weinzweig of Zingerman’s always said, Paula’s stories help me explain things to my customers. 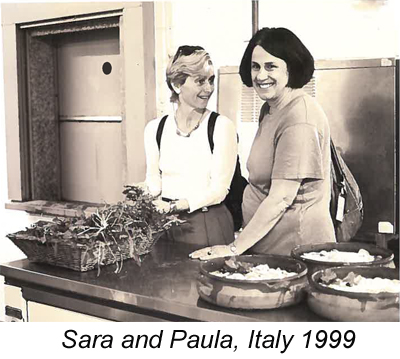 You can get a view of Paula from Corby Kummer, who wrote about Paula at a 1997 Oldways conference in Crete in The Atlantic:  “During one memorable afternoon the cooking authority Paula Wolfert laid dozens of weeds along several long tables, with painstakingly researched explanations on sheets beneath each plant. It was like a high-school science fair that ﬁlled the assembled food writers with an almost mad curiosity to feel and nibble the stalks and leaves before us — such a mini-stampede did we cause that Wolfert policed us, dividing the room into two groups and giving us each a strict ﬁfteen minutes to examine the goods.”

Paula’s cookbook, The Cooking of Southwest France, educated a generation of American-born chefs and cooks focused on French cuisine, including Boston’s Gordon Hamersley, chef/owner of the now closed Hamersley’s Bistro. A big Paula fan, Gordon told The Boston Globe in 2009 that “I’m just a bean guy, I love cassoulet, the wintry dish of tender beans simmered with chunks of ﬂavorful pork and garlicky sausage.” Gordon credits Paula as an inﬂuence, and speciﬁcally, her well-researched book. In it, Paula writes that cassoulet is the quintessential dish of the region and there is plenty of dispute as to how an authentic cassoulet should be made. She certainly had her own opinion.

Chef, food writer, cookbook author, and radio host of NPR’s Good Food on KCRW (Southern California’s ﬂagship NPR aﬃliate) Evan Kleiman speaks for many, I am sure, writing about Paula as a culinary hero: “My personal cooking matured as it was fed on Paula’s books. She took a generation of us on her journeys through homes and kitchens, teaching all of us the value of ﬂavor, doing things a very particular way, authenticity (old ways) and, as she says…ingredients, ingredients, ingredients.”

See for yourself! Google any chef or food writer, followed by Paula’s name, and you will ﬁnd similar praise and appreciation for the inﬂuence she has had on the chef or food writer’s career. Even better, try one of Paula’s many award-winning cookbooks and decide which one is your favorite. I have two: Mediterranean Grains and Greens: A Book of Savory, Sun-Drenched Recipes and Mediterranean Cooking.

For Oldways, Paula is the ultimate team player, the ultimate teacher. She always contributed during a conference or culinary tour, and her curiosity and imagination was infectious — raising the bar for learning for all around her.

Paula is also generous to a fault, oﬀering praise and appreciation to others — a sometimes rare quality. Once she said her way — and Oldways’ — was the way of the hedgehog — the ultimate compliment (see Paula’s Mediterranean Diet Month memory). She meant that we both steadfastly viewed food through the lens of love and idealization of the Mediterranean style of life (“The hedgehog knows one big thing.”).

No, question about it: Paula is gracious, but truly it’s Paula who has changed and/or inﬂuenced so many.

Barbara D’Alessio
I was fortunate to meet Paula in Morocco with Ana Sortun. An unforgettable and inspirational experience. The best!!!!