Today, First Lady Michelle Obama unveiled proposals for an update to the Nutrition Facts Panel found on all packaged foods. The Nutrition Facts Panel was first created in 1993 and has been largely unchanged in the past two decades. Now, the Food and Drug Administration is proposing updates aimed at helping Americans to make healthier food choices. We’ve reviewed the changes, and want to share Oldways’ views on what works – along with a few shortfalls in the new labels. 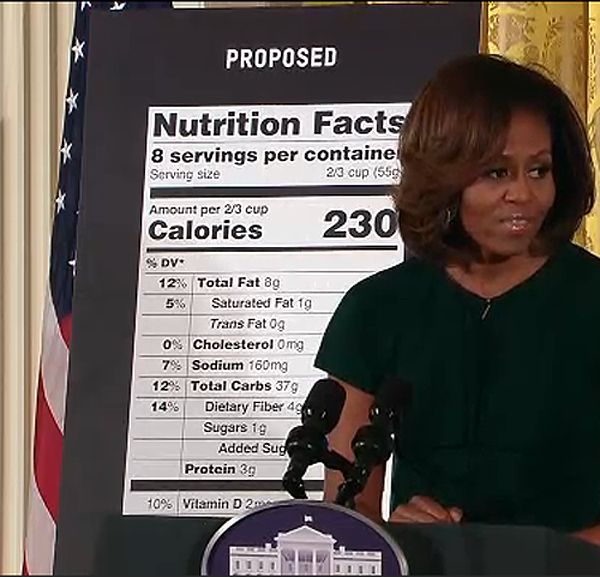 Today, First Lady Michelle Obama unveiled proposals for an update to the Nutrition Facts Panel found on all packaged foods. The Nutrition Facts Panel was ﬁrst created in 1993 and has been largely unchanged in the past two decades. Now, the Food and Drug Administration is proposing updates aimed at helping Americans to make healthier food choices. We’ve reviewed the changes, and want to share Oldways’ views on what works – along with a few shortfalls in the new labels. 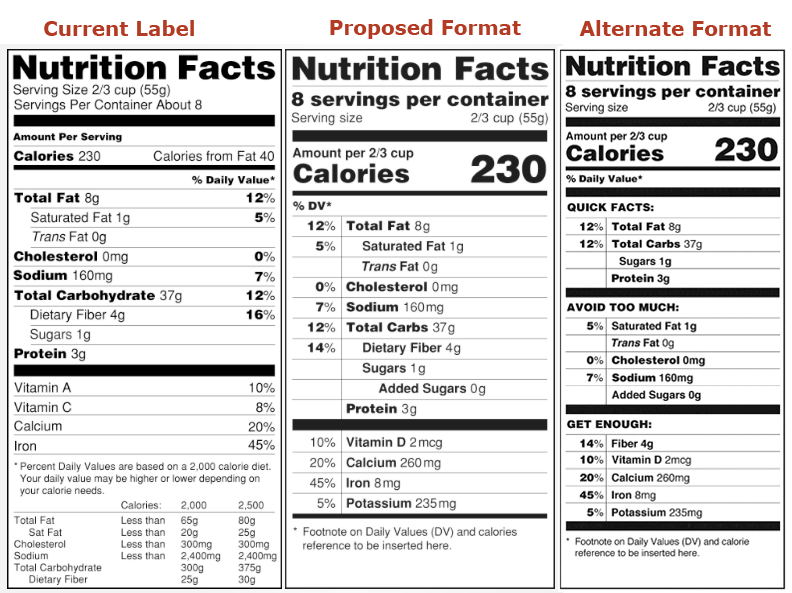 Calories (and Servings) Are More Prominent
The most important and useful change in the proposed new labels is making both calories and servings more prominent. This only helps, however, if people have a sense of how many calories they should be eating in a day. Since nutrition labels are based on a 2000 calorie-a-day average diet, why isn’t it clear that a single serving of the food in the example label gives you more than 10% of your total calories for the day? This lack is especially surprising now that the “% of Daily Values (DV)” has been made more prominent for all the other values on the label.

Servings Are Updated and Clariﬁed
The number of servings in a container is also more prominent on the new labels. But what is a serving? Some critics suggest that all standard serving sizes are too small. For instance, the oﬃcial size of a serving of ice cream is just a half cup, while many people routinely eat a pint of Ben & Jerry’s by themselves. Yet, if we make a pint (two cups) the oﬃcial serving size, we’re saying, “It’s normal – and a good idea – to chow down two cups of ice cream.” How do we reﬂect reality without encouraging gluttony? According to published reports, FDA tried to toe this middle line; about 17% of products will have their serving sizes adjusted – including ice cream, where the new serving size will be one cup (not two!).

Another issue with servings relates to container size. No one really buys a 20-ounce Coke and shares it with one and a half other people, so each one gets an 8-ounce serving. Again, how do we reﬂect reality without endorsing overeating? FDA found a good solution: Now, many foods and drinks will show nutrition facts for a standard serving and for the whole package, as some beverage manufacturers have been doing voluntarily for the last few years.

Before we ﬁnish with servings, we’ll mention one more thing on our wish list: We’d like to see harmonized serving sizes in all government messages. The serving of ice cream, or bread, or crackers, or any food used on package labels should be the same as the serving size used in the Dietary Guidelines. Currently they diﬀer widely – and the new generally larger FDA label servings will make this gap even bigger. The Dietary Guidelines for Americans are also in the process of being updated, and we strongly urge that USDA and FDA work together to present one seamless, clear message to consumers.
Added Sugars Are Spelled Out – and Will Prompt Reformulations

Although America’s weight problems are not due solely to sugar, Oldways has always believed that transparency helps move change in positive directions. We’ve seen how the Whole Grain Stamp has spurred manufacturers to switch to more whole grains, and we think that calling out added sugars will — through competitive pressures — encourage companies voluntarily to reduce sugar.

Some in the food industry argue, justiﬁably, that our bodies process both natural and added sugars similarly. While that may be true, it’s great to have a way for consumers to separate the natural “unavoidable” sugar that comes in a piece of fruit or a glass of milk from the “avoidable” sugar that is added to many products.

Separating “Get More” from “Get Less”
One of the limitations of the old label is a lack of distinction between nutrients most of us need to limit and nutrients most of us need more of. It’s good when a food oﬀers a higher DV percentage of ﬁber, but it’s bad when the food oﬀers a higher DV percentage of sodium or added sugars. Yet both are treated the same on the old label and on the new format that was prominently featured behind Mrs. Obama in the announcement.

There were originally two options put forward — one that included a clear diﬀerence between “get more” and “get less” nutrients, and one that didn’t. Unfortunately, the one that included this clariﬁcation — pictured here — has now been dubbed the “Alternate Format,” and left out of most reports. You can ﬁnd it on the FDA’s website, however, and Mrs. Obama, in her remarks, said that the government would be accepting comments on both options. We vote for the Alternate Format. (Oh well. At least the Daily Value, or DV, for ﬁber has been increased to reﬂect updated science.)

The Big Picture – and the Importance of Health through Heritage
Any changes in the Nutrition Facts Panel need to be part of an overall education eﬀort. If no one reads the labels anyway, or no one understands his/her calorie needs for the day, none of this makes a diﬀerence in the long run. Which argues for intensive education about the importance of eating by the numbers.

Here at Oldways, we think there’s another road, a more enjoyable road. Labels like these matter most on highly processed foods. Foods in their natural state (like an apple) or with minimal traditional processing (like unsweetened yogurt) really don’t need complicated labels.

If you eat mostly food that has been highly processed, the new labels will help you ﬁnd a healthier path through these more complex choices. On the other hand, if you follow a traditional diet consisting mostly of real food, like the diets advocated by the Oldways pyramids, then you can relax and put down your calculator; there’s no need to “eat by the numbers.”