Adding herbs (and spices) in your cooking is one of the best ways to add ﬂavor to food and liven up just about any dish without adding sugar, salt or fat. The diﬀerence between herbs and spices?  Herbs are the leaves of the plant, whereas spices come from the roots, bark, and seeds of the plant. 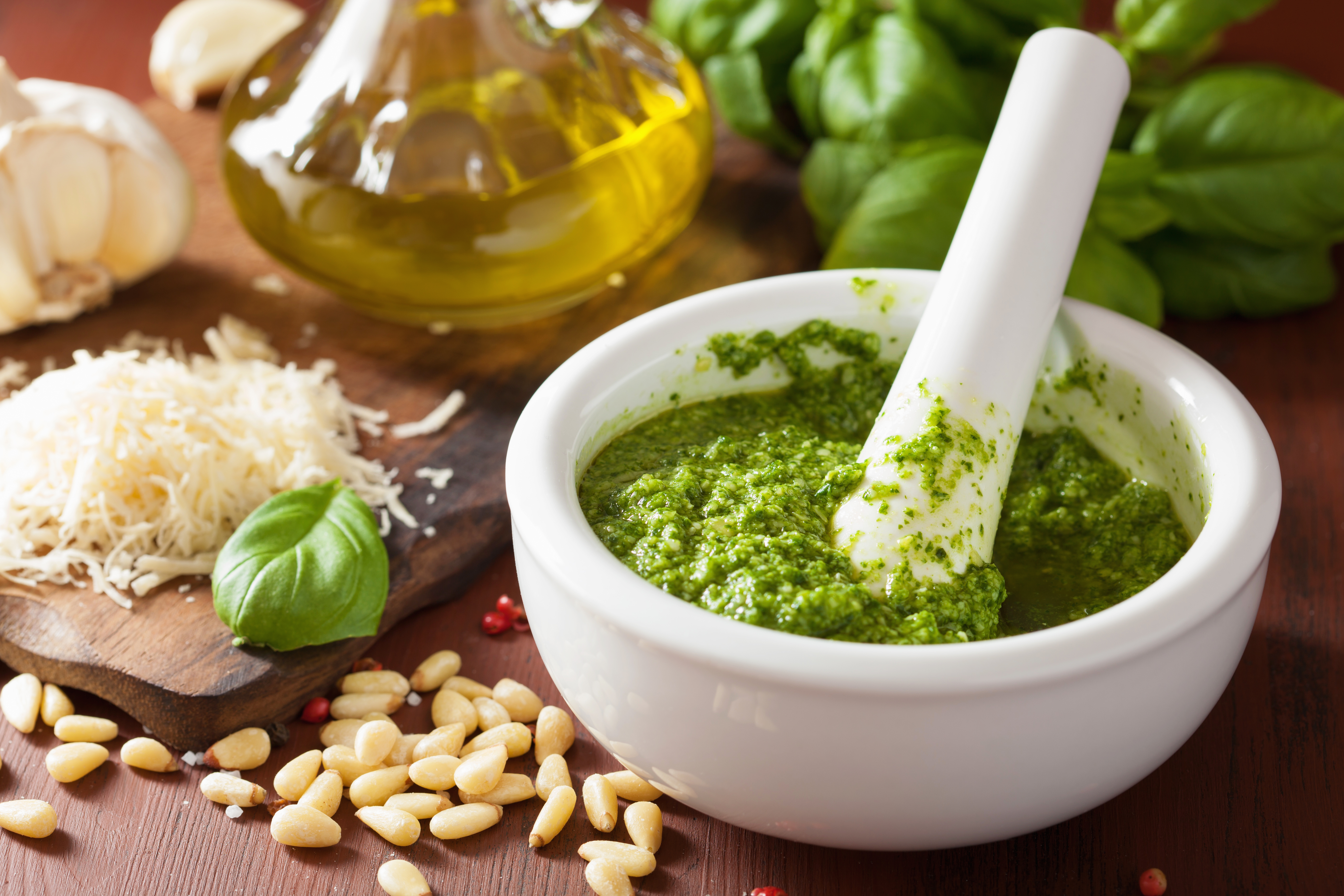 If you have the space for a few pots, some potting soil, seeds or seedlings, you can grow herbs in your backyard or windowsill with minimal eﬀort. Perennial herbs like sage, thyme, lavender, chives, and mint do not need to be replanted each year, as they can survive for several growing seasons—an extra bang for your buck. In addition, you can extend the life of herbs by drying them. Because dried herbs are generally more potent and concentrated than fresh herbs, you’ll need less—typically a third the amount of dried herbs to fresh.

In the Mediterranean, an abundance of fresh herbs, many of which grow wild, are used in daily cooking to impart ﬂavor as well as for their inherent healing properties (e.g., phytonutrients).

Basil belongs to the mint family and is well known for its use in Italian cuisine. Basil is one of the primary ingredients in Italian pesto sauce (or pistou in France), a Margherita pizza, and a Caprese salad. There are a number of types of basil, which diﬀer in taste and smell. Sweet or Genoese basil is the most commercially available basil used in Italian food. It has a strong clove scent because of its high concentration of the chemical eugenol. For maximum ﬂavor, add basil at the end of cooking.

Mint isn’t just a sprig that garnishes your plate. It is extremely versatile and can be used in sweet and savory preparations. In Mediterranean cooking, mint pairs exceptionally well with lamb. Mint adds a refreshing element to many dishes, including cheese, meat, salads, and rice dishes. Steeped fresh mint is also a favorite herbal tea. Spearmint is most commonly used for cooking purposes. 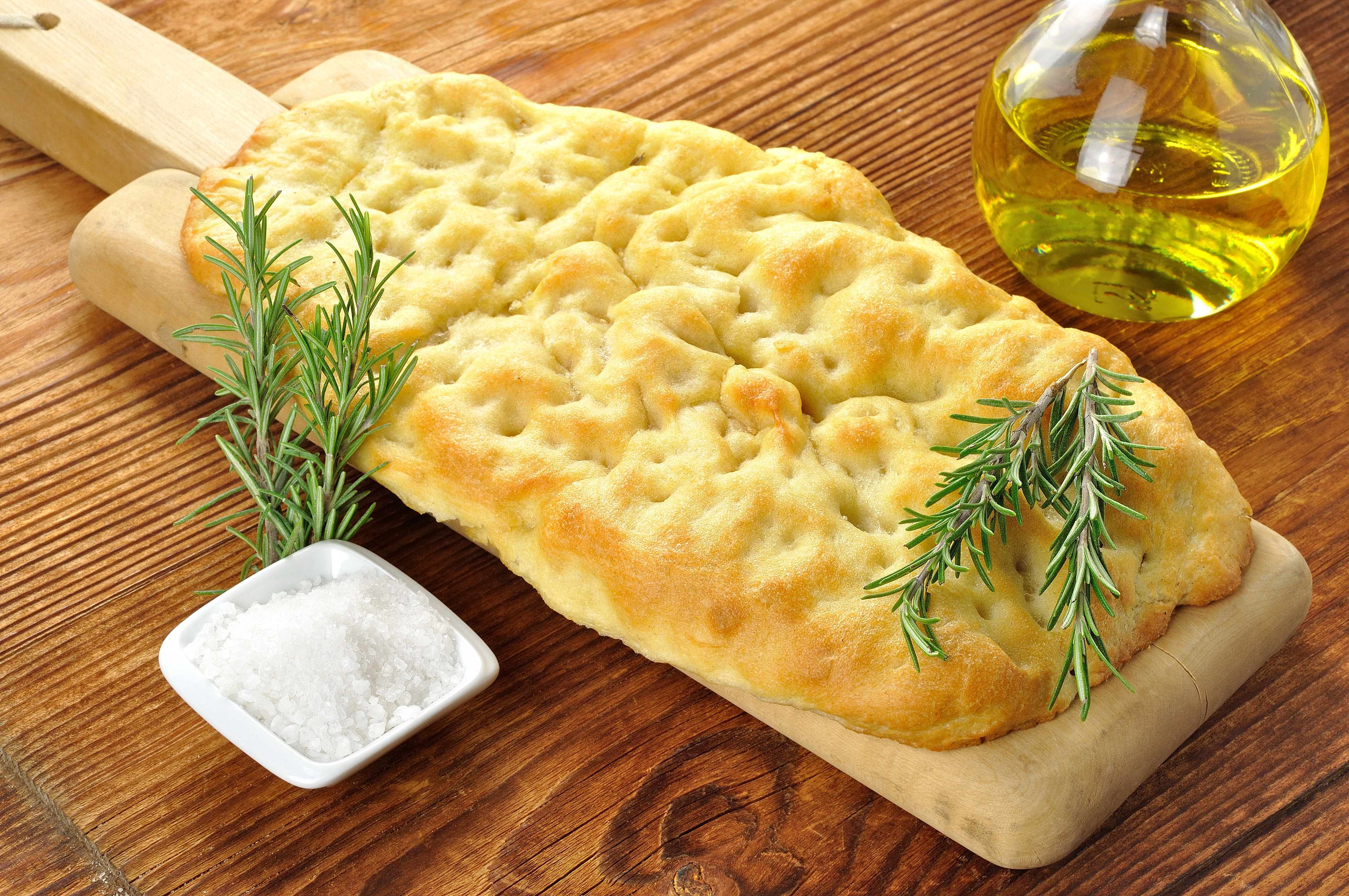 Oregano has a bright, tangy, lemony ﬂavor. It grows wild throughout the Mediterranean and is essential to Italian and Greek cooking. Its name is derived from the Greek words oros (mountain) and ganos (joy). The Greeks and Romans consider oregano to be a symbol of joy and happiness. In fact, it was traditional for Greek and Roman brides and grooms to be crowned with a laurel of oregano. Oregano pairs well with grilled meats, ﬁsh, and atop feta in a traditional Greek salad.  Oregano is also a classic addition to pasta sauce.

Rosemary is a versatile herb with a woody, piney ﬂavor. It complements and enhances a wide range of foods, particularly roasted meats and chicken. Rosemary is also used widely in marinades, breads (atop focaccia), soups and stews, and roasted vegetables, especially potatoes, and infused in olive oil.

Sage, with its strong earthy ﬂavor, is often used to season pork, lamb, sausage, and even pasta. In Italy, it’s commonly chopped, mixed with melted butter, and served stirred into pasta or gnocchi. Crisped up in a pan with a little oil and sprinkled with sea salt, fried sage is a fabulous hors d’oeurves, and also serves as a nice garnish for any number of dishes.

Tarragon, a staple seasoning in French food, has a sweet, fresh, licorice-like ﬂavor and partners well with chicken, eggs/omelets, mushrooms, potatoes, and folded into aioli. It also serves as a ﬂavoring agent for vinegar and olive oil.

Thyme is used to ﬂavor meat, poultry, and ﬁsh and has a natural aﬃnity for mushrooms. It’s also traditionally included in a bouquet garni, a bundle of herbs used to ﬂavor soups, stews, stocks, and sauces. Thyme is one of the main components of Herbs de Provence, along with marjoram, rosemary, summer savory, and, sometimes, lavender. Za’atar, a spice mixture common in Eastern Mediterranean and Middle Eastern cuisines, is comprised of a combination of ground dried thyme (oregano or marjoram), ground sumac, and toasted sesame seeds. It’s great simply mixed with olive oil for dipping bread or combined with plain yogurt and olive oil.

HC
Looking forward to learning more about the Med Diet!
Aimee Rashotte
I want to eat a Mediterranean diet for heart health.