Aglaia Kremezi Remembers Friends and a Traveling Circus of Foodies As Ari Weinzweig eloquently wrote "one of the great things about Oldways is the way in which it has allowed so many of us in the food world to connect—with other cultures and each other—on a regular basis." 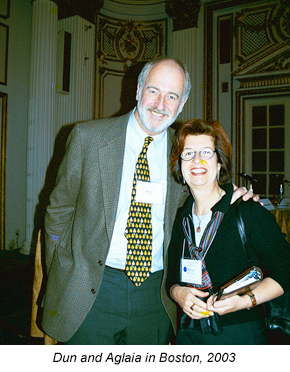 Aglaia Kremezi Remembers Friends and a Traveling Circus of Foodies

As Ari Weinzweig eloquently wrote “one of the great things about Oldways is the way in which it has allowed so many of us in the food world to connect—with other cultures and each other—on a regular basis.” Wandering around North African souks, getting lost in the enchanting maize of La Boqueria, in Barcelona, or sharing 12 diﬀerent dishes prepared with superb fresh anchovies in a tiny sea-side Salerno village are a small example of the wealth of experiences that we enjoyed in ‘the Oldways’ traveling circus of foodies,’ as somebody once called our multi-national group.

In the early 90s I had the privilege to be the local coordinator of the very ﬁrst Oldways Mediterranean conference that took place at the Porto Carras hotel, in Halkidiki, in northern Greece. The imposing hotel—now a grand resort and casino—designed by Gropius, was far from any village or local market, so we had to bring in cooks, bakers, cheese-makers, and all sorts of artisans from various parts of the country. How else could the participants get an idea of what our food is, beyond “Greek salad,” mousaka, and the diner’s version of spanakopita?

It was a tall order for me as I had to bypass the unbelievable red tape of the rigid government organizations, who supposedly ﬁnanced the event. Many oﬃcials insisted that we included their relatives, friends and clients as experts, trying to undermine my suggestions. I had a very good idea who we should bring—passionate home-cooks from mountain villages, tavern owners from islands and cities. They had to be part of this food fair, and I had convinced them to leave their villages and families for a week to come to Halkidiki and prepare their traditional foods for the participating journalists and authors. But I went through months of agony and exasperation, as I was met with all sorts of silly excuses, delays, and strange demands from some politicians and civil servants.

Greg Drescher and Dun Giﬀord, understanding the problem, authorized me to use the following key phrase: “You can ignore my suggestions, but keep in mind that these Americans are crazy and if you don’t do exactly as I tell you, they said they will withdraw from the project completely!” It worked most of the time, and if it didn’t, then Yannis Boutaris stepped in. Yannis — now the internationally admired mayor of Thessaloniki — is a man of vision, who had single-handedly taken Greek wines to the next level. He was instrumental in making sure the Oldways conference would happen, bypassing a zillion problems. Years later, after we succeeded in creating a conference people still remember, I heard that Boutaris paid much more than he was supposed to, as a sponsor, since the oﬃcials failed to honor all their commitments (but this is another, terribly sad, but typically Greek story).

Years later, preparing with Dun and Sara the next two Greek conferences—in Crete, and in Chios and Lesbos—Dun knew exactly how to handle the 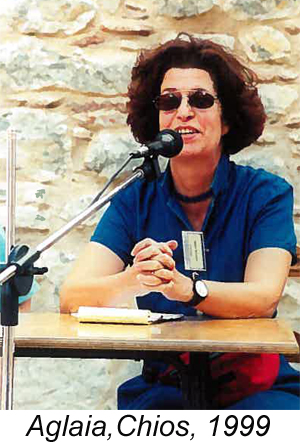 infuriating bureaucrats and I thoroughly enjoyed his imposing I-won’t-take-no-for-an-answer way of stating the conference’s demands.

PS. An evening, during the preparations for the Chios-Lesbos conference, we shared some wine with Sara and Dun at my ﬂat in Athens. Melech, our charming but completely spoiled late dog, lingered dangerously over the meze laid on the low table. It had happened before, and the only solution was to tie him in the bedroom and somehow get on with our evening ignoring his ﬁerce barking. Dun had another idea. He calmly lowered his wineglass, placing it under Melech’s nose; miraculously the dog withdrew to the other side of the room and never came close to the table again. Unfortunately the trick seldom worked when Costas or I repeated it…

I prepared a version of this traditionally Lenten recipe during the Oldways conference in Istanbul.

For about 30 baklava rolls

Directions:
Preheat the oven to 350°F.

Halve the lemon and quarter.  In a small saucepan, heat the oils with the lemon over low heat for 5 minutes; do not boil. Let cool completely and discard the lemon.

Meanwhile, spread ½ cup of the almonds on a baking sheet and lightly toast, about 6 minutes. Coarsely chop the toasted almonds and the remaining ½ cup almonds in a food processor.

In a medium bowl, combine the almonds, sugar, cinnamon and nutmeg.

Divide the kataiﬁ into thirds and place in a large plastic bag to keep it from drying out. Stack the phyllo sheets on a work surface and cover with plastic wrap and then a damp kitchen towel.

Drizzle the kataiﬁ with some lemon-oil and sprinkle about 2 ½ tablespoons of the almond mixture evenly over it. Brush the uncovered phyllo border generously with oil. Starting with the short side nearest you, roll up the phyllo tightly like a jellyroll, brushing the outside lightly with oil as you roll. Press to seal and turn the roll seam side down on the work surface.

Cut the log into 10 equal pieces and place the pieces cut side up about ½ inch apart on the baking sheet. Make 2 more logs (20 more baklava rolls) in the same manner. Bake the rolls on the middle rack of the oven until golden brown, about 30 minutes.

Transfer the hot baklava rolls to a baking dish large enough to hold them tightly in a single layer and pour the warm syrup over them, making sure to cover each roll. Let stand for 2 to 3 hours. Turn the rolls over, cover, and let stand at room temperature for at least 1 day before serving.

Baklava rolls will keep in airtight containers for up to 2 weeks.