Ana Sortun Remembers a 'Turkey Potluck'...it isn't what you think! As a chef I travel a lot to the Mediterranean for inspiration. Some of my favorite Mediterranean memories are of Turkey. 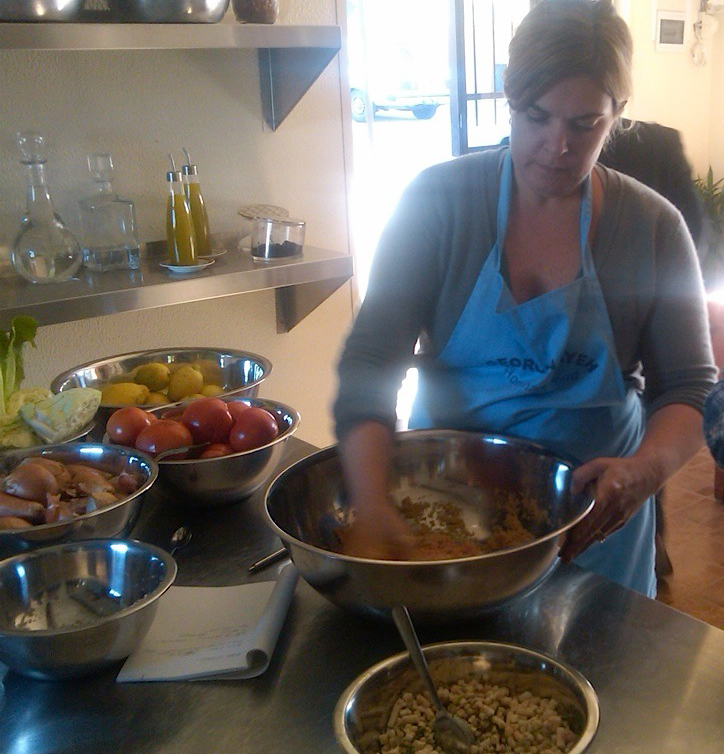 Ana Sortun Remembers a ‘Turkey Potluck’…it isn’t what you think!

As a chef I travel a lot to the Mediterranean for inspiration.  My restaurants, both Oleana and Sofra, serve Mediterranean cuisine with an emphasis on Turkey and parts of the eastern Mediterranean.  I love using bulgur wheat to make dumplings (kibbeh or kofte).  I recently had a class on making many kinds of them in Lebanon in 2012.  The recipe I share below for a red lentil slider has all the ﬂavors of Turkey and is ﬁlling and as delicious as a hamburger.  I also love these sliders as a great alternative to a veggie burger.

Some of my favorite Mediterranean memories are of Turkey. In 1997, I was working at Harvard Square’s Casablanca restaurant, cooking Mediterranean food mostly inspired by my travels to Italy, Spain, and the south of France. While at Casablanca, I was invited by Ayfer Unsal to visit Turkey for the ﬁrst time and to study the cuisine from her hometown, Gaziantep. When I thought about going to Turkey, I imagined genies and ﬂying carpets. I had no idea.  But it’s the memory of a potluck she threw for me that is tattooed inside my head forever. It was a turning point and a revelation in my career as a chef.

Her friends graciously threw me a welcome lunch (potluck) in the park. Everyone prepared a favorite recipe (Ayfer made me make one too!) and there were 30 amazing dishes spread out from one end of the table to the other. I tasted every single one and it was all so unfamiliar yet very rich and complex. I realized that I had tasted 30 dishes, essentially making my way through a 30-course tasting menu and I didn’t feel terrible. Even though the ﬂavors were complex, the dishes were light. This idea of food being rich but not heavy was something new for me. I’ve been hooked since that day and it has changed the way I cook forever. It became a study from there on and I explored ingredients, spices, recipes, and techniques, eventually coming up with my own style of Mediterranean cooking that is modern, interpretive but inspired by what I learned and continue to learn from travels to Turkey and other parts of the Mediterranean. 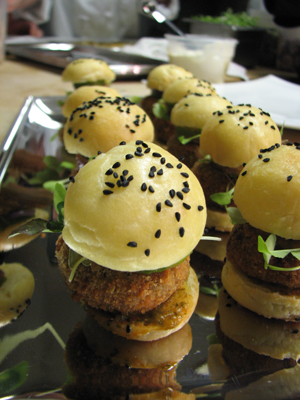 Directions:
Melt the butter in a medium saucepan. Add the white onion, cabbage, apple and carrot and cook over moderate heat, stirring occasionally, until softened, about 7 minutes.

Stir in the tomato paste, cumin and paprika, then add the lentils and water and bring to a boil. Simmer over moderate heat until the lentils are tender and have absorbed about ¾ of the liquid, about 12 minutes.

Stir in the bulgur and remove from the heat. Let stand until the liquid is absorbed and the bulgur is softened, about 20 minutes. Season with salt and pepper. Transfer the lentil mixture to a rimmed baking sheet and spread in an even layer to cool.  Form into little patties.

In a small saute pan, heat olive oil and fry the sliders for 3 minutes on both sides until golden brown.  If the mixture is wet and falling apart, use a little ﬂour to coat the outside.  Toast the brioche bun.  Spread zhoug (recipe below) and apple pickle and top with red lentil cake.  Sandwich with romaine or shredded spinach.

Directions:
Place all ingredients in a blender and blend until very smooth and season well with salt.