Recently I had asked everyone here at Oldways to share their memories of Dun as we paid tribute to his passing. Having not met him, I set out to cook one of his recipes from the

Oldways Table cookbook as my way to commemorate his passing. I ﬂipped through the pages and came across a wonderful sounding fresh fava bean soup (Potage Aux Feves Fraiche).  The idea of a vibrant soup in the springtime seemed perfect to bring some cheer and warmth to these rainy evenings. But I learned a few things in the process.  First, fava beans are not quite in season around Boston… What is available this time of year are fava bean greens – who knew! Fava bean greens are beautiful and have a great bean ﬂavor and the leaves would make for a delicious salad.  But since my mission was to make soup I decided to use the greens in place of the beans, with some encouragement from the farmer who grew them.

My plan was to cook the greens down with water, add cooked bacon, then puree into a soup.  I do believe that with a few more trials this could work but alas, great inventions don’t always pan out on the ﬁrst try. 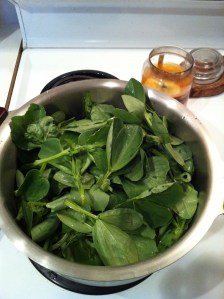 I used less water than the original recipe called for since I did have a concern the greens would not have a strong enough ﬂavor to hold up against 8 cups of water.  I was correct but I did not cut down enough so, once pureed, the soup still had a watery ﬂavor.  In an attempt to save all those lovely greens, I added in some extra bacon I had left over and let it cook down a bit more.  It was more palatable, but still not the soup it was meant to be.  I’ll deﬁnitely wait a few more weeks until fava beans are in season for my second attempt. 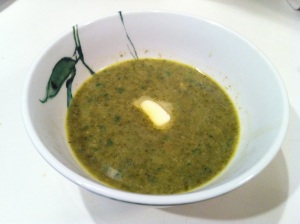 In an eﬀort to keep a positive spin on things I decided to think about what I learned.  And what I did take away from this experience are a few lessons -for life and cooking- that I think Dun would appreciate: --Cook seasonally, whenever possible —Follow the recipe—the ﬁrst time —If at ﬁrst you don’t succeed, try again —You don’t have to like it but you have to try it —And most importantly, a little bit of bacon does make a lot of things better! - Rachel