Springtime is a time of renewal. As I write this, daﬀodils are blooming and small green buds are swelling on branches that will soon be dense with the pale green of new leaves. In our northern winters, the gray and white sameness goes on day after day, mocking the possibility that anything diﬀerent will ever occur – and then, in a matter of days, miraculous transformations are everywhere. Whether it’s the spirit of transformation or the specter of appearing in public in a bathing suit, spring is also a time when losing weight seems both essential and possible. It’s glorious to be outside, and we pick up the pace of physical activity, while light salads creep back onto our plates, replacing the heavy comfort food of winter. All things seem possible, for a time. But how do we turn the possibility and promise of rebirth into reality, when it comes to weight control? 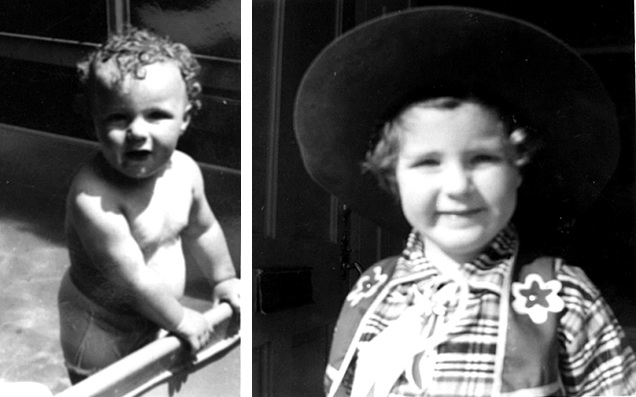 I was a fat kid from Day One. See for yourself: that’s me in the kiddie pool in 1953, at about 16 months, and four years later in my favorite cowgirl outﬁt that I insisted on wearing almost every day to Kindergarten. When I weighed 122 at age 10, my pediatrician told my mother not to worry; I’d be ﬁne if I just kept the same weight the rest of my life, as I continued to grow. But I only grew two inches taller after that and soon, 122 was left in the dust. For most of my adult life, I felt the hope of springtime weight loss, and tried various diets and approaches to lose weight. But as the years went on, my weight crept up over 150, with a pound or two extra each year. I never reached a weight that was dangerously unhealthy, and next to my fellow overweight Americans I felt fairly normal. That said, my wardrobe was made up of lots of loose tunics – nothing ﬁtted or tucked in – and I was not comfortable in a bathing suit. Here I am, in the photo below, with son Sam in 1998. At age 20 he looks lithe and athletic; at age 46 I look… well, 46. 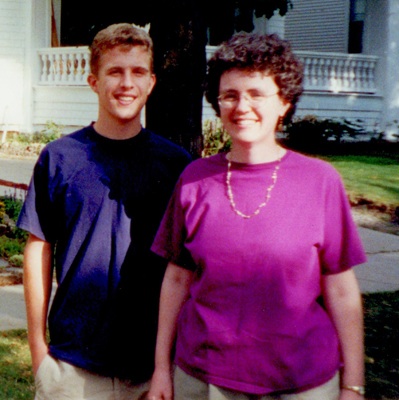 Five years later, when we climbed New Hampshire’s Mount Major together on a glorious fall day, Sam hadn’t changed much, but I was nearly 30 pounds lighter – almost back to that ﬁfth grade weight.  In this photo, my hips are smaller now with my hands in my pockets, than they were on their own before! 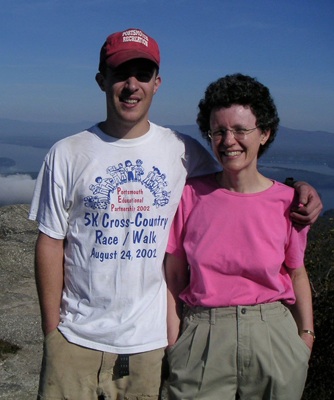 The irony is that I didn’t lose weight until I stopped trying. My turnaround came when I changed ﬁelds professionally, and began studying nutrition. I decided to Just Eat Good Food for a month, to see what eﬀects it would have on my health, especially sleep problems and skin problems. It’s not like I ate really poorly before. I ate a high-ﬁber sweetened cereal for breakfast most days, often kept lunch to crackers and cheese and fruit, and cooked real dinners at the end of the day.  But for that month, I cranked it up. I paid no attention to quantity and no attention to convention; the emphasis was all on quality. For thirty days, I eliminated all white ﬂour and added sugar, and gave my frugal self permission to go overboard buying new fruits and vegetables I’d never tried. My breakfast might be steel-cut oats one day, and a bowl of soup the next. I experimented with cooking diﬀerent whole grains, and discovered that my lifelong “dislike” of beans was merely an aversion to the baked beans served during my childhood. It meant changing a lot of habits, but hey, you can do anything for just a month.

Portion control is important, but quality control is, too. All my life I had taken the portion control approach to “healthy” eating, cutting back until I felt so deprived that binges were inevitable. Food can drive you nuts when you’re hungry all the time. Dr. Barbara Rolls, at Penn State, has discovered that most women need about three pounds of food a day to feel full and satisﬁed.  When you concentrate on quality and increase things like broccoli, beans and barley in your diet, you’ll reach that satisfying three-pounds-full level with a lot fewer calories under your belt (literally) – and a lot more nutrients.

So all I was trying to do was to eat better – to eat nothing but food that was both good for me and tasted good. I “knew” I couldn’t lose weight unless I felt deprived all the time, but now, I was amazed to see the pounds disappearing, even though I was never hungry. After a month, I’d lost  ten pounds, which motivated me to keep going for another month, and then a third. By now, my old pants were way too big, in front and in back, and it was time to buy new clothes. 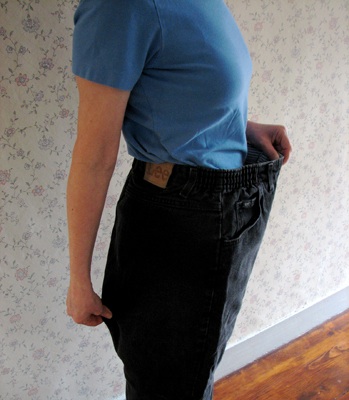 I started to sleep better, too, and the annoying itchy skin that had deﬁed my dermatologist got better. What’s more, the hay fever that had had me popping prescription allergy meds all summer for the past 30 years was gone. I’d achieved my initial goal of improving my health – and lost a great deal of weight to boot.

That was nine years ago, and it’s been no problem keeping the weight oﬀ, as you can see in the 2009 picture below, with my daughter and granddaughters. I’ve eased up, and enjoy small amounts of added sugar (who can live without dark chocolate?), and occasionally eat reﬁned grains when no whole grains are available.  Most of our meals, however, still center around copious amounts of vegetables, beans, and whole grains, with ﬁsh and a bit of meat thrown in a few times a week. 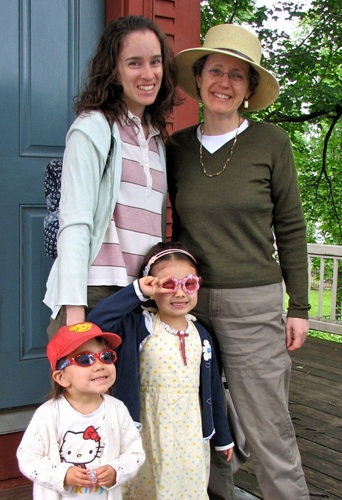 In my head I called my approach Just Eat Good Food, but I wasn’t the ﬁrst to eat this way and it wasn’t really my invention. Once I joined Oldways and learned about the Mediterranean Diet and other traditional diets around the world, it was immediately clear that they’re all based on the same premise: a daily savoring of whole, fresh foods, without counting calories or obsessing about food. Just Eat Good Food. What have you got to lose?  — Cindy