It seems ﬁtting that as the Mediterranean Diet Pyramid turns 25 years old today, it is being celebrated as the #1 overall diet (tied with the DASH diet) by US News & World Report’s annual ranking. It was also named #1 in Best Diabetes Diets, #1 (tie) in Best Diets for Healthy Eating, #2 (tie) in Best Heart-Healthy Diets, #1 in Best Plant-Based Diets, and #1 in Easiest Diets to Follow.

It wasn’t always that way.

In 1993 Americans were fat-phobic and clamoring for “no-fat” or “low-fat” foods created by food manufacturers anxious to capitalize on the US government’s ill-fated low-fat dietary police. Oldways, along with a number of prominent nutrition scientists, believed that this was bad advice and bad public policy, and was doomed to increase obesity and the incidence of other chronic diseases such as heart disease, diabetes, and cancer.

As history shows, we were right.

To counter the fat phobia and to provide an alternative to the USDA Pyramid ﬁrst introduced in 1992, Oldways brought together a world-class group of nutrition scientists, public policy experts, chefs, and food writers for the 1993 International Conference on the Diets of the Mediterranean. The outcome of this ground-breaking conference was the ﬁrst Mediterranean Diet Pyramid, introduced on January 23, 1993. 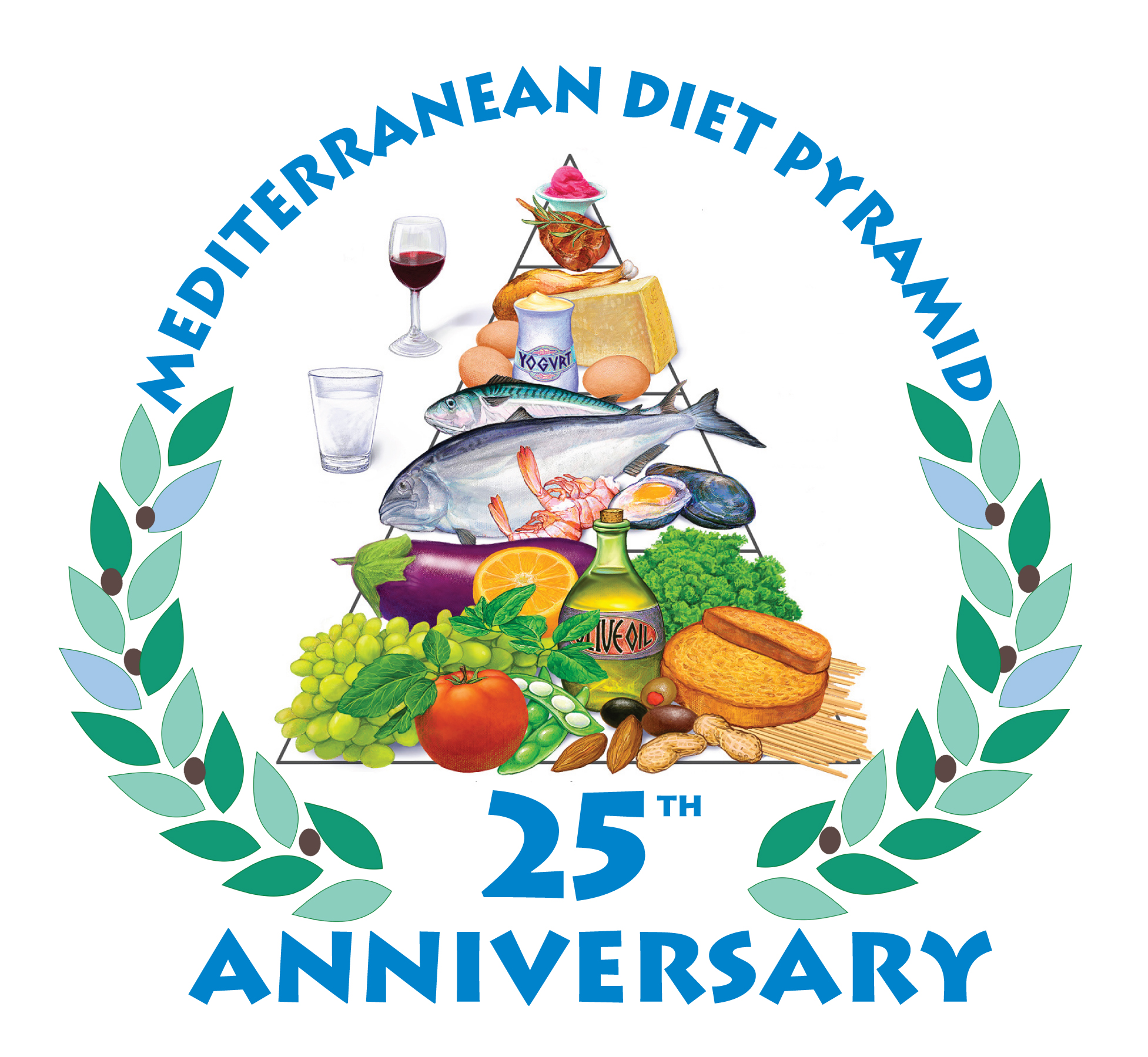 Following the introduction of the Pyramid, the conference concluded with a roundtable discussion among experts from a number of disciplines (science, cooking, food and health writing, public policy, communications). Legendary New York Times writer R.W. Apple moderated the session, drawing out impressions and thoughts about the impact the Mediterranean Diet Pyramid could have on American families and society. It was fascinating.

Built on a foundation of solid science 25 years ago, the Mediterranean Diet Pyramid has withstood the test of time and has given invaluable guidance to millions. Since its construction, the evidence for additional health and environmental beneﬁts has grown steadily, and its impact on public health has extended globally.” - Walter Willett, MD, DrPh, Harvard School of Public Health; Chair of the Department of Nutrition in 1993

Because Ancel Keys was a hero of mine with his many contributions to our understanding of nutrition and heart disease, providing the scientiﬁc basis for the healthfulness of the traditional Mediterranean Diet, it was a thrill and an honor for me to ﬁnally meet him at the Mediterranean Diet Conference, organized by Oldways.” - Frank Sacks, MD, Harvard School of Public Health

I’m amazed and delighted at the positive eﬀect the Mediterranean diet has had on the way many Americans eat. In the 25 years since we ﬁrst started talking about it (and since my Mediterranean Diet cookbook was ﬁrst published), we’ve learned to consume more vegetables, eat less red meat, drizzle more olive oil over our plates, improve our health and, by the way, have a lot more fun with our food. But…there is always a but: We still have a long way to go. We need to kick the fast food habit, we need to get over our overly processed food choices, and above all, we need to raise our children in a world of delicious, tasty, health-giving food—and teach them that it’s both easy and fun to eat well.” — ​Nancy Harmon Jenkins, cookbook author and food writer; one of Oldways’ founders

Oldways made a diﬀerence in bringing the Mediterranean Diet to America thus contributing a lot in changing the way people eat.” - Antonia Trichopoulou, MD, Hellenic Health Institute, University of Athens in 1993

As Oldways’ creation of the Mediterranean Diet Pyramid turns 25 this week, I say let’s keep this happy and healthy party going! It seems a bit funny now, that in a world where the “Mediterranean Diet” has become part of everyday language at dinner tables and on restaurant menus, an emphasis on including more fatty ﬁsh, olive oil, and the enjoyment of wine was ground-breaking diet advice two and half decades ago. We’re still learning more about the beneﬁts of following the Mediterranean Diet. We started out excited about heart health beneﬁts and longevity, but emerging research reveals beneﬁts for the brain too. The omega-3 fatty acids in seafood (especially fatty ﬁsh such as tuna, salmon, sardines) and other foods enjoyed in the Mediterranean (such as purslane, a dark green leafy vegetable) are linked to improved cognitive function. The brain has speciﬁc nutrition needs too, so the Mediterranean Diet Pyramid is your guide to good health from head to toe.” — Carolyn O’Neil, MS, RDN, food journalist, and CNN health reporter in 1993

Nutrition is an evolving science, but it’s clear that eating a traditional Mediterranean-style diet rich in fruits, vegetables, whole grains, nuts, beans, seafood, olive oil, and fermented dairy foods like yogurt is good for human health. And you can’t beat the versatility and ﬂavor, either. It seems like just yesterday, but for 25 years, the Oldways Mediterranean Pyramid has been bringing this luscious diet to life for consumers, making the switch from a ‘modern’ heavily processed diet to a table topped with colorful, nutrient-rich whole foods. Now that’s something to celebrate!” - Liz Weiss, MS, RDN, Host of the Liz’s Healthy Table podcast and blog; CNN health reporter in 1993, and covered the conference for CNN 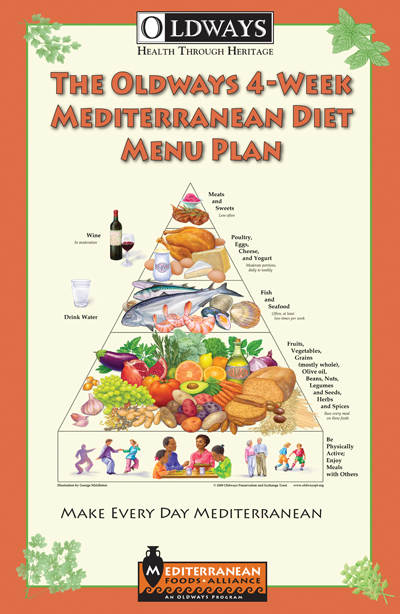 What will the next 25 years bring? Here at Oldways, it is our hope that the Mediterranean Diet becomes not only the #1 diet in oﬃcial rankings, but also—and more importantly!—in kitchens from coast to coast. (By the way: If you want to start with your own kitchen, you might want to check out our Med diet cookbook or sign up for our Mediterranean diet newsletter!)

Carolyn ONeil
This is an important snap shot and I'm thrilled to be a part of the quotes listed above. I didn't go to Harvard, but I was quoted along with my favorite Harvard School of Public Health professors!
Marian Morash
Who knew 25 years ago that the smart folks who brought us the Mediterranean Diet would so influence our culinary lifestyle. Now it has taken its place as the recipe for good health and good food. Congratulations to all who brought it to life!!