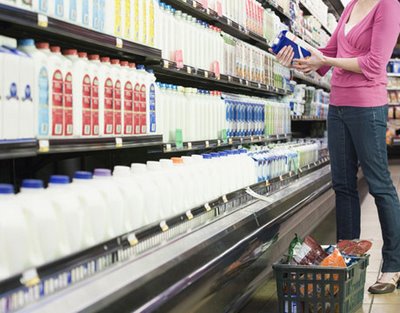 (picture via Robinsbite) I would consider myself a less than frequent milk drinker, using it only sparingly for cups of tea in the morning and, while I was in college, for an occasional bowl of cereal. Usually I would forget about the cereal and consequently the milk and, ultimately, I’d pull oﬀ the cap one day and be slapped with an immediate and putrid reminder that it must have been bought weeks ago.  Eventually the frustration of this pattern wore on me, and I stopped buying milk altogether. When I began working at Oldways, my mom and I started sharing big cartons of organic milk.  At ﬁrst I didn’t notice how long the turnover periods were between milks, but after returning from an extended vacation of more than two weeks, I found the old carton, which we’d bought more than two weeks before our vacation, was still good (If you’re doing the math, that’s about a month!). We marveled at the organic milk’s stamina and freshness, but never looked into why this was. Further investigation was sparked recently by a discussion I had with my family at a “farmer’s dinner” held by good friend Jesse Cool at her restaurant Flea Street Café in Menlo Park, California.  An early and passionate proponent of sustainable, local, and organic food and cooking, Jesse regularly hosts these dinners with the farms she buys from.  Each dinner showcases and celebrates a diﬀerent local farm, its seasonal produce and the farmers, who she aﬀectionately refers to as the “rock stars” of the food world. The particular farm showcased that night was the Webb Ranch Farm, located on 230 acres close to Stanford University.  We learned that over their long relationship Jesse had pushed for the farm to become certiﬁed organic for many years, which they eventually did. 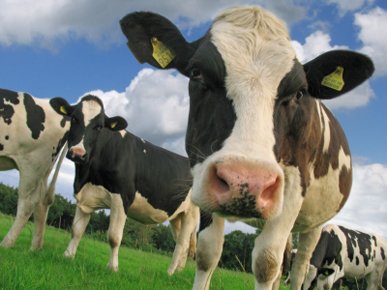 (picture via Fresh Fuzz) This was the perfect place to ask our question about the longevity of organic vs. conventional milk, right?  While we introduced this topic to our dinner companions, they were just as baﬄed as we were.  So back in Boston a few days later, I was determined to ﬁnd an answer and turned to another resident expert: Google.  After some research I found that there is a diﬀerence in expiration dates, but in actuality, it has nothing to do with the milk being organic or non-organic, rather just a diﬀerence in the pasteurization process itself. The process giving milk a longer shelf life is called Ultra Pasteurization (UP).  Most organic milks have been processed using this method, and therefore have a longer shelf life (although it is possible to ﬁnd some brands of organic milk that have been pasteurized using the traditional High Temperature Short Time method).  In UP, the milk is heated for 2 seconds to 280 degrees Fahrenheit, the temperature required to kill spores in milk.  Some people’s opposition to organic milk, other than the noticeable increase in price from regular milk, is the taste.  Because the milk is heated to a higher temperature, it burns some of the sugars, giving it a sweeter “cooked” taste. Most conventional milk you ﬁnd on the shelves at your local grocery store today have been pasteurized using the High Temperature Short Time (HTST) method, which uses metal plates and hot water to raise temperatures to at least 161 degrees Fahrenheit for 15 seconds or longer.  Because the temperature never reaches the high degree that UP does, the sugars are not burnt, therefore not giving it the caramelized taste some perceive with organic milk. You may ask why there would be this diﬀerence in methods commonly associated with organic and conventional milk.  The most signiﬁcant reason organic milk suppliers are more likely to use UP is because the cost of organic milk is higher, fewer people consume it, and therefore shelf turnover is slower.  If more organic milks were pasteurized using the conventional HTST treatment many stores would be stuck throwing out unsold, spoiled milk.  In the future, as demand for “conventional tasting” organic milk rises, you may see more HTST organic milk on the shelves.  But for now, the UP process allows for extended shelf life, and therefore a viable and proﬁtable product for retailers to carry. Have you noticed an extended shelf life with organic milk?  Can you taste the diﬀerence between UP milk (generally organic) and HTST milk (generally non-organic)? Which do you like better?  — Casey