Got Milk? Calcium and the Mediterranean Diet

When we think of the traditional Mediterranean Diet, we’re much more apt to picture its delicious foods accompanied by a small glass of wine rather than a big glass of milk. This alarms some people who ask us, “Isn’t the Med Diet low in calcium? 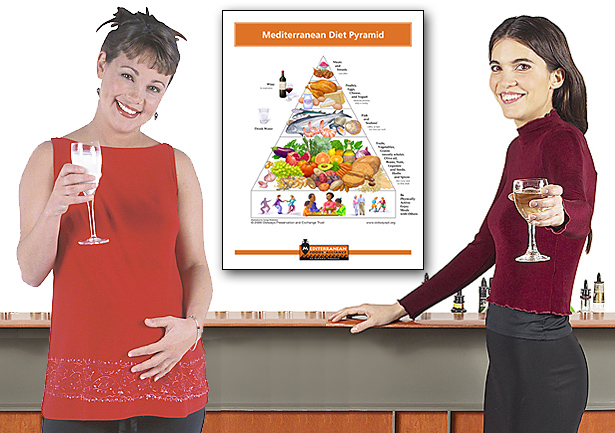 When we think of the traditional Mediterranean Diet, we’re much more apt to picture its delicious foods accompanied by a small glass of wine rather than a big glass of milk. This alarms some people who ask us, “Isn’t the Med Diet low in calcium? What about bone health?” In fact, the scientiﬁc evidence is strong and compelling that people who follow a traditional Mediterranean Diet do just ﬁne in the calcium and bone health departments. Here’s just some of the evidence showing why:

Med Diet May Signiﬁcantly Increase Calcium Uptake. A 2007 study in the Journal of the American College of Nutrition fed a group of young men a normal diet and then a Mediterranean-type diet, both with the same level of calcium intake. Tests showed that the young men absorbed 40% more calcium from the Mediterranean Diet and retained 80% more, resulting in bone markers reﬂecting a higher bone turnover rate (a good thing!). Med Diet Has “Bone-Sparing” Properties. Another 2007 study, this time from Médicines Paris, found “conspicuous diﬀerences in the severity of osteoporosis” in diﬀerent parts of Europe, with the lowest incidence in the Mediterranean area. The study attributed this to foods containing “a complex array of naturally occurring bioactive molecules with antioxidant, anti-inﬂammatory and alkalinizing properties that may contribute to the bone-sparing eﬀect of Mediterranean diet.” It turns out that an increasing body of research shows we may be barking up the wrong tree, in fact, when we assume that more calcium results in fewer fractures. More Calcium? No help with Fractures. Swedish scientists followed 61,433 women for 19 years. Their research, published in 2011 in the British Medical Journal, found that hip fractures did not decrease with increased intake of calcium. In fact, the researchers concluded that the highest intake of calcium “did not further reduce the risk of fractures of any type, or of osteoporosis, but was associated with a higher risk of hip fracture.” So who are we to believe? It’s a little head-scratching that scientists in diﬀerent countries, using the same body of evidence from international studies, come up with diﬀerent calcium recommendations for people over 50 — ranging from 700mg in the UK, 800mg in Scandinavia, to 1,200mg in the US and 1,300mg in Australia. Since the human body just is not that diﬀerent from country to country, it’s safe to assume that maybe the evidence isn’t absolute for one particular level of calcium over another. Around the world, it’s rare for traditional diets to include milk in adult diets. So how do traditional diets like the Mediterranean Diet ensure good bone health? The answers lie in Vitamin D from sunshine and ﬁsh; in weight-bearing exercise; in natural sources of calcium such as white beans, leafy greens, little bony ﬁsh like sardines and anchovies, or cheese and yogurt. So go dig in your garden, ﬁx yourself a delicious Mediterranean feast full of healthy whole foods, enjoy a paseo around the neighborhood, and relax, knowing your bones will thank you. - Cindy

Helen Goudeau
Thank you for your article, trying to refine my diet but finding out that I have been doing many things right and some not so.