Gluten Free: The Fad vs. The Facts

“Miley Cyrus touts gluten-free diet: What do doctors say?” asks a CBS report. This and similar items featuring Gwyneth Paltrow, tennis pro Novak Djokovic, and other celebs make it seem that following a gluten-free diet is in the same league as Reese Witherspoon’s promotion of the baby-food diet, or Christina Aguilera’s belief that foods of the same color should be eaten on the same day.
Whole Grains

“Miley Cyrus touts gluten-free diet: What do doctors say?” asks a CBS report. This and similar items featuring Gwyneth Paltrow, tennis pro Novak Djokovic, and other celebs make it seem that following a gluten-free diet is in the same league as Reese Witherspoon’s promotion of the baby-food diet, or Christina Aguilera’s belief that foods of the same color should be eaten on the same day.

For about 1% of the population, however, avoiding gluten can be a matter of life and death rather than a passing fad. These people have celiac disease and for them, consuming gluten, a protein found in wheat, barley and rye, can destroy the lining of their digestive tract, leading to serious and even fatal malnutrition. Another 5-6% (estimated) of the population suﬀers from gluten intolerance, a less serious but no less real diﬃculty in digesting gluten.

Dr. Joseph Murray, a celiac expert at the Mayo Clinic, estimates that 30-40% of Caucasians have a genetic predisposition to celiac disease (HLA-DQ8 and HLA-DQ2 genes). Genes change very, very slowly – yet Dr. Murray’s research shows that the actual incidence of celiac has increased almost four-fold since the early 1950s. This isn’t just increased diagnosis: Murray compared stored blood samples from 60 years ago to samples from today and found a big increase in the markers of celiac disease.

“The trend is way too fast to be genetic,” agrees Dr. Alessio Fassano, Medical Director of the University of Maryland’s Center for Celiac Research in a recent interview with Oldways. Fassano and Murray point to several possible factors in our environment that have changed in the past half-century and that could be increasing the expression of gluten-sensitive genes – many of them related to simple over-exposure to gluten.

What are these factors – and how can we use our knowledge of them to turn this trend around and keep gluten-containing grains on the table for as many of us as possible?

Novel Uses for Gluten. As anyone who tries to follow a gluten-free diet knows, gluten is not just found in breads, cakes and cookies. It’s also widely used as a binder and texture-stabilizer in foods from ketchup to salad dressing to candy – and is found in many vitamin supplements. So we’re eating much more gluten than we ever have – and in unusual contexts. Dr. David Katz, writing in the Huﬃngton Post, postulates that eating gluten in “novel nutrient pairings” may be responsible for some of the rise in gluten reactions. Perhaps there’s something in grains that oﬀsets the gluten, but that’s missing when gluten is used as an isolated ingredient.

Changes in Baking Techniques. For much of the 10,000+ years that humans have been enjoying grain foods, fermentation has played a key role in the preparation of these foods. From porridges that sit in an unrefrigerated pot for days to hearty breads formed from sourdoughs using natural yeasts, our grains have historically been lacto-fermented a large part of the time. Now research shows that fermentation with certain lacto-bacilli can reduce the gluten in wheat ﬂour from levels as high as 75,000 parts per million, to an almost-undetectable level of 12 ppm, a level considered technically gluten-free.

Changes in our Bodies. Auto-immune disease and allergies are on the rise overall, and celiac disease is just one way in which this larger trend is manifesting itself. Dr. Elena Verdú, Professor of Gastroenterology at McMaster University’s Medical School, told Oldways that changes in the gut biome may be one factor causing an increase in gluten sensitivity. “Bacterial changes are also associated with other autoimmune diseases. We’ve seen a sharp and persistent increase in irritable bowel disease, type 1 diabetes, and many more.” Some experts also blame the “hygiene hypothesis” – the idea that our immune systems have so little “real work” to do in our sanitized world that they ﬁnd imagined enemies in gluten, peanuts, and other “invading” proteins. Just last week, in fact, a drug company introduced a new treatment for autoimmune disease that involves swallowing pig parasites – to replace some of the parasites that have for millennia played some key role in our bodily evolution but are now absent from our bodies.

The Old Ways of eating oﬀer guidance in meeting all of these challenges (though we’re not advocating a daily dose of parasites). Here are several ideas we do recommend, to potentially reduce your chances of developing celiac disease or a gluten sensitivity:

1. Eat a Variety of Whole Grains. Fourteen or more grains are readily available in our food supply, and only four of them (wheat, rye, barley and triticale, a rye-wheat hybrid) contain the glutens some people can’t digest well. (Oats are sometimes contaminated by being grown or processed with these other grains.) We know intuitively that when we hear the message “Eat more vegetables” we shouldn’t just eat carrots, healthy as they are. Similarly, when we seek to “Eat more whole grains” we shouldn’t just turn to wheat. Check out our Whole Grains A to Z for ideas and remember that gluten free doesn’t mean grain free.

2. Try Diﬀerent Wheat Varieties. When you do eat wheat, be aware that research indicates that most older varieties (with two or four sets of 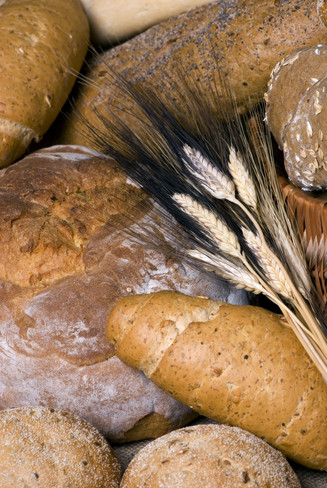 3. Enjoy Fermented Foods. Throughout history, fermentation helped humankind process and preserve foods by increasing the good bacteria that drive out bad bacteria. That’s what foods from kimchi to yogurt have in common: they’re teeming with the good bacteria that made “processed” food safe before the advent of refrigeration. (Did you know sourdough bread has a longer shelf life, without questionable preservatives or extra salt?) Leaving foods like these out of our diets, while Irradiating our food to kill all bacteria and taking antibiotics right and left, have left us with a gut biome with a very diﬀerent ecology than that with which we evolved. Eat some good ol’ fermented foods regularly, to build up those friendly bacteria in your gut. They help you properly digest a wide range of foods and you can’t live without ‘em.

4. Eat a Varied Diet of Whole Foods. You can cut down hugely on the gluten in your diet if you stick largely with traditional whole foods prepared at home., Eating real foods without secret binders and other industrial ingredients cuts the risk of “novel nutrient pairings” cited by Dr. Katz, too. Our bodies are used to eating gluten with all the other parts of wheat, rye and barley – so enjoy a ﬂaky whole grain croissant or pizza crust, but pass on gluten in your salad dressing, by mixing your own vinaigrette.

For more information on gluten, including links to intriguing research, check out the two blogs we wrote on the Whole Grains Council site, titled “Celiac Disease Increases Fourfold” and “Research Sheds Light on Gluten Issues.”