In August, I celebrated my 40th birthday and ninth wedding anniversary with a trip to Portugal. I spent equal time in the capital Lisbon and the northern city of Porto, but I also took several memorable side trips. This included wandering a bit south to the agricultural region of Alentejo; passing through the village of Óbidos (known for ginjinha, a sour cherry liqueur, and stunning aerial views of ochre- and lapis-accented shops and homes); and a stop in Nazaré (home to 100-foot world record waves and extreme surfer Garret McNamara). Before returning home, I also visited the largest Azorean island of São Miguel, where natural wonders like Logoa das Sete Cidades (“Lagoon of the Seven Cities”) and Logoa do Fogo (“Lake of Fire) alternately translate as “Photoshop is for Suckers.”

While Lisbon is a European city, discerning eyes will see the imprint of Africa on almost every aspect of its culture. Even beyond architectural Moorish relics and stunning azulejos (ornamental tiles), and the blues-tinged ache of fado music that originated in the neighborhood of Mouraria (the former Moorish quarter), there is a very distinct African heartbeat as you walk Lisbon’s streets. Mainstream cultural tourism doesn’t choose to promote this version. While you can’t miss the gleaming white “Monument of the Discoveries” celebrating the Portuguese explorers and their patrons, it’s rarer to hear candid acknowledgment of what “exploration,” colonization, and enslavement meant for those who were subjugated. 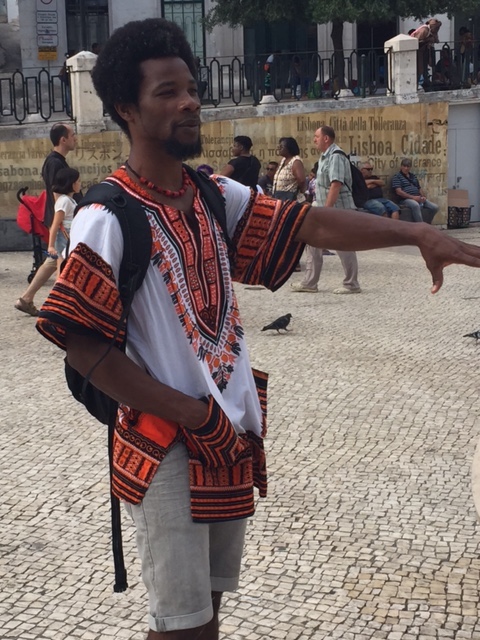 You might notice the peculiar name of Rua Poço dos Negros (“Road of the Pit/Well of the Blacks”), but there is no marker to tell you that it is a site of a mass grave in a 16th century African neighborhood called Mocambo (derived from Angolan for “hideout”). It’s also pretty easy to walk past a monument of General Bandeira without realizing it was intended to commemorate the abolition of slavery. The enslaved woman at the foot of the statue, modeled on a real-life free woman of color from Cape Verde, instead looks more Greco-Roman with her aquiline features. It’s only when you get very close that you notice the remnants of a chain hanging oﬀ her ankle. These are just a few of the topics of thoughtful conversation that I had with African Lisbon Tour founder Naky Gaglo, a native Togolese, who walked a small band of ﬁrst-time visitors through the circuitous streets of the capital city for six hours.

What is immediately obvious when you explore Lisbon is the varied hues of its Lusophone inhabitants, hailing from former colonies of Cape Verde, São Tomé, Guinea-Bissau, Angola, and Mozambique, as well as several other continental African countries.

Africa is also very apparent in the city’s cuisine: Portuguese food is not all chorizo, bacalhau, potatoes, and cheese; it’s also Angolan, Cape Verdean, and Mozambican. It’s cachupa, such as the one served at Tambarina by charming Cape Verdean restaurateur Domingos de Brito, a slow cooked stew made with hominy, beans, cassava, and sweet potato and usually with ﬁsh, pork, or linguiça and sometimes eggs. This traditional dish is even better with a hint of chili sauce (and I mean a hint, because they bring the heat here!). Likewise, in the festive yellow alley of Mozambican restaurant Cantinho Do Aziz, visitors enjoy relaxed dinners with friend and family, partaking in more hot chili sauce as a dip for their vegetarian and carne chamussas (savory fried pastries), ikala (crab and shrimp in coconut and peanut sauce), and chicken with okra. I noticed that many of these restaurants, whether Angolan or not, serve their own versions of muamba (Angolan stewed chicken cooked with garlic, chili, tomato, vegetables, and palm oil) alongside funji (cassava porridge that is the country’s version of fufu).

You’ll also see Africa in the markets of Rossio Square and in the regal matriarchs that rule the sidewalks of Martim Moniz. In the neighborhood shops, you’ll ﬁnd everything from dried baobab fruit, palm oil, dried ﬁsh, roselle/hibiscus, fonio, and gourds of all sizes. The African elders, who Naky aﬀectionately claims as his “grandmothers and aunties,” are impossible not to notice as they sit and socialize, beautifully robed in a kaleidoscope of colors. And whether in restaurants or bars, or on the sidewalks during the nights or mornings, you may be serenaded by the sounds of Lusophone performers of African descent.

Even outside of Lisbon, as I moved geographically closer to home, I continued to notice that Portugal and African heritage foods central to A Taste of African Heritage were far from strangers. Azoreans eat hearty soulful meals that include lots of cassava, sweet potatoes, and pumpkin. Cozido das Furnas is a heart-warming stew made with all the meat of your dreams (sorry, not plant-based!), plus potatoes, sweet potatoes, cassava, and kale cooked by volcanic steam. The stew pot is lowered into the ground where fumeroles work their magic over the course of six hours. And at the Mercado da Graça, you’ll ﬁnd piles of sweet potatoes and jars of pumpkin jam (sweetened but not heavily spiced as it is here, so you can taste the actual pumpkin!).

It turns out that I had aptly traveled with culinary historian Michael Twitty’s The Cooking Gene, in which he discusses how the Portuguese brought not only Catholic tradition and European imperialism to the African continent, but also some key plants and crops that are staples of the African heritage diet: “…cassava, corn … sweet potatoes, peanuts, kidney beans, chili peppers and other ‘American’ crops exploded in popularity, owing to their similarity to previously established crops. Cassava quickly rivaled millet and sorghum, the indigenous starches grown before European arrival…”

I look forward to returning to Portugal one day and exploring even more of the cultural and culinary connections that I observed on this ﬁrst trip. And I deﬁnitely encourage anyone who wants to learn more about African Diaspora communities in Portugal to seek out African Lisbon Tour for an unforgettable experience.

Ben Handy
Bravo! I felt like I was there with you. Your words left me “hungry” for more. Happy Anniversary!
Eric Berry
This is a great article. Can I share it on my website and link back to you? Heading to Portugal next week.
Hannah-Oldways
Absolutely! Thanks so much for sharing, and enjoy your trip to Portugal.
Tony Russell
Speaking of African foods in Portugal, can anyone tell me where to find ackee, which though originally from Africa, is now usually associated with Jamaica. It’s a travesty to be here in the ‘home of bacalaú‘ (salted cod) and be unable to find ackee, the other key ingredient in our national dish, ackee & saltfish! I had no trouble finding it when recently in Berlin.
Jennifer Sena
My parents are from Cape Verde and I love that you mentioned our food and culture. Obrigada