Janet Helm, MS, RD I’m a writer, registered dietitian and mom of twins. My passion is translating nutrition science into intelligible words – and healthy food choices. I want to help people make sense of nutrition news. I don’t think it needs to be complicated or confusing. l believe food should be enjoyed, not feared. And I think taste and health can happily co-exist. Learn more about Janet's work by visiting her blog or say hi to her on Twitter @janethelm 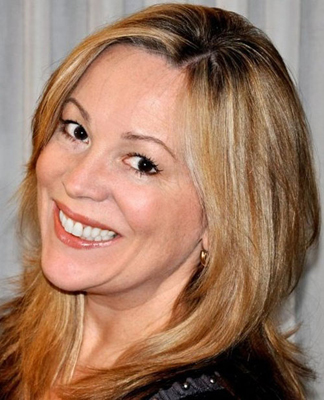 Janet Helm, MS, RD
I’m a writer, registered dietitian and mom of twins. My passion is translating nutrition science into intelligible words – and healthy food choices. I want to help people make sense of nutrition news. I don’t think it needs to be complicated or confusing. l believe food should be enjoyed, not feared. And I think taste and health can happily co-exist. Learn more about Janet’s work by visiting her blog or say hi to her on Twitter @janethelm

We live the Mediterranean lifestyle in our house.  My husband grew up in New York, but he was born in Lebanon.  So there are many Middle Eastern staples that make frequent appearances on our table.

Although my blog Nutrition Unplugged focuses primarily on food trends, diet myths and fad-free healthy eating, I often write about Lebanese cuisine.  In fact, some of my most popular blog posts – and the ones that are pinned most frequently on Pinterest – are recipes for authentic Lebanese tabbouleh and fattoush salad. It seems that quite a few others share my passion for the food in Lebanon – a place that truly appreciates the pleasures of the table.

Our family is planning a trip this summer to Lebanon, where my father-in-law built a home near Byblos that overlooks the Mediterranean Sea.  The land surrounding his home is full of olive trees, grape vines and big bushes studded with red berries that are dried for the lemony-tart spice called sumac.   It’s in Lebanon that I ﬁrst tried freekeh, the ancient grain that may soon become the new quinoa.  This smoked green wheat is a delicious whole grain that you can ﬁnd in Middle Eastern markets and the natural foods sections of some supermarkets.

I love the tradition of mezze in Lebanon – where the table is ﬁlled with an array of appetizers, and the pace is slow and leisurely.  Hummus always makes a starring appearance.  And I can’t think of anything I love more than hummus, which has hit mainstream status in the U.S.  It’s the new salsa, and now you can ﬁnd a startling variety of prepared hummus in supermarkets everywhere.

It’s about time the humble chickpea had its day in the sun.  Several studies suggest this pale legume deserves the limelight.  Packed with ﬁber, protein, folate and hard-working phytonutrients, chickpeas have a lot to brag about.

Australian researchers found that a chickpea-heavy diet helped bring down blood cholesterol levels, including LDL or “bad” cholesterol.  Even more recently, the same group of Aussies found that chickpeas helped with glycemic control and insulin resistance — which may be valuable in the prevention and management of diabetes.  Other studies suggest chickpeas can help tame your appetite.

Beans are a lean alternative to meat, so making a substitution could be beneﬁcial.  After all, beans are oﬃcially part of the protein food group. MyPlate also counts them as a vegetable.  In fact, beans are the only food that can do double duty.  They belong to both food groups. Dietary guidelines recommend 3 cups of beans per week — but most people need to triple the amount of beans they eat to achieve this level.  Certainly, hummus is a good place to start.

Even though it’s easier than ever to ﬁnd prepared hummus in most supermarkets today, there’s nothing like making it yourself. Even though we like the plain garlic/lemony version best, we will often experiment by adding diﬀerent ingredients, including canned chipotle chiles in adobo sauce, roasted red peppers, chopped jalapenos, olives, cilantro or pomegranate molasses. 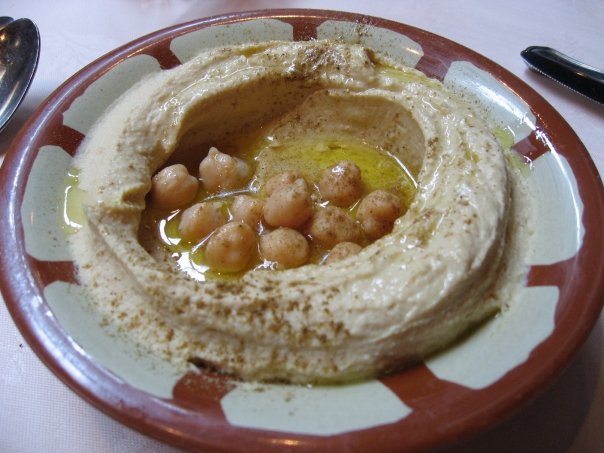 Directions:
Combine all of the ingredients except the water and the optional garnish in a food processor and process until smooth. Add water to thin the hummus to the desired consistency (about ½ cup).  Transfer to a bowl and drizzle with additional olive oil to keep the hummus from crusting, and add garnish. Refrigerate until ready to use. Serve with pita chips or fresh vegetables.

My Lebanese mother-in-law used to boil canned chickpeas ﬁrst to soften and get rid of the thin skin on the bean (to make for a really creamy hummus), but I tend to skip this step.  You also can rub the chickpeas with your ﬁngers until the skins come oﬀ. My husband often enjoys a version without tahini that’s called balila hummus.