Linda McDonald, MS, RD Linda is owner of SUPERMARKET SAVVY, an information and resource service for health professionals providing a monthly newsletter and teaching tools to assist in educating consumers on shopping for health. Visit Linda at her website, read her blog or follow her on Twitter @SUPERMRKTSAVVY.

Linda McDonald, MS, RD
Linda is owner of SUPERMARKET SAVVY, an information and resource service for health professionals providing a monthly newsletter and teaching tools to assist in educating consumers on shopping for health. Visit Linda at her website, read her blog or follow her on Twitter @SUPERMRKTSAVVY.

I learned during a recent trip to Sicily that Sicilian cooking is living history. Its position in the middle of the Mediterranean Sea where Europe stops and Africa begins brought a series of conquests that shaped the Sicilian table over the past 4000 years. The Greeks came bearing gifts of honey, wine, ricotta and olives, followed by the Romans who cultivated wheat, grains, and pulses (legumes). In the ﬁrst century, the Arabs and Muslims introduced sugar cane, citrus, fruits, eggplant, rice, couscous, spices, tuna traps and an ingenious system of irrigation. Normans left a legacy of dried ﬁsh and blue-eyed children. Tomatoes, potatoes, peppers, squash, and chocolate came from the New World with 400 years of Spanish rule. Even a brief English presence is remembered in the legacy of Marsala wine. With a mild climate and lush, productive, volcanic soil, Sicily became the bread basket for each successive conqueror.

It may come as a surprise to learn that one of the classic dishes of western Sicily is couscous, but consider that North Africa is closer to Sicily than Rome. Some claim that on a clear day you can see Tunisia from the western shore of Sicily. Cuscus arrived in the culinary baggage of the 11th-century Arab rule. 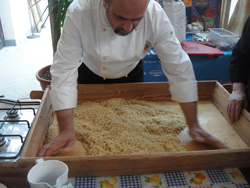 Couscous is traditionally made from semolina (a coarse milling of hard wheat) and water, with the ﬁnished product a small, rice sized pasta. I watched Chef Peppe Buﬀa, who won the famous couscous contest in San Vito de Capo in 2010, prepare couscous from scratch and it is a hands-on, labor intensive process. In a large wooden container he rubbed the semolina in a rotary motion with one hand while sprinkling the proper proportions of ﬂour and water with the other until he had the proper size of tiny granules. Then the couscous was put to rest in the proper wooden bowl and eventually steamed in a couscous steamer. Today, there are many great whole wheat couscous products on the market, and some new brown rice ones that are marvelous too.

Sicilian Fish Couscous
This is a traditional dish of Sicily and one that I made while on my Sicilian Culinary Adventure with Suzanne Kordesh, MPH, RD; Chef Paolo Monti; and Chef Peppe Buﬀa. 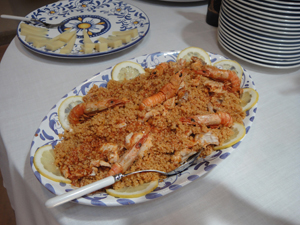 Add the tomatoes and cook for another couple of minutes.

Pour in the wine and stock and bring to a boil. Cook for 2 minutes then add the couscous. Turn down to a simmer and add the ﬁsh. Cover with a lid and cook until the ﬁsh is done, about 5 to 7 minutes.

Divide into 4 bowls and sprinkle with parsley to ﬁnish.