Roberta Schwartz Wennik, MS, RD Roberta is President and owner of Spin-a-Recipe® LLC found at www.spinarecipe.com, where you can play the recipe slot machine for delicious, nutritious recipes. She created this clever and fun approach to answer the age-old question, “What should I make for dinner?” As a culinary nutritionist, Roberta wants to see more people eating at home where they can control what’s going into their food, share more meals together, and take time to enjoy a pleasurable eating experience. Visit her blog Follow or say hello to her on Twitter @SpinARecipe_com.  Bon appétit! 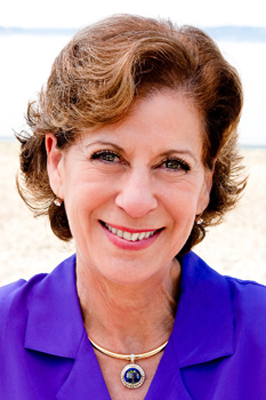 How Do I Love the Mediterranean? Let Me Count the Ways

Roberta Schwartz Wennik, MS, RD
Roberta is President and owner of Spin-a-Recipe® LLC, where you can play the recipe slot machine for delicious, nutritious recipes. She created this clever and fun approach to answer the age-old question, “What should I make for dinner?” As a culinary nutritionist, Roberta wants to see more people eating at home where they can control what’s going into their food, share more meals together, and take time to enjoy a pleasurable eating experience. Visit her blog Follow or say hello to her on Twitter @SpinARecipe_com.  Bon appétit!

There is so much to love about the Mediterranean region — the weather, the beauty, the charm, the people, their lifestyle, and most especially their food.  All the countries that border the Mediterranean — Greece, Italy, France, Spain, Turkey, North Africa, and the Middle East — oﬀer their unique culture, character, and food.

In spite of their diﬀerent customs, what these people share is their desire to eat what is grown locally and regionally.  While most Americans shop in a supermarket, selecting foods from far and wide, the people in the Mediterranean region traditionally shop at their outdoor markets from local farmers whom they get to know on a ﬁrst-name basis.  They’re not stocking up for a week’s worth of groceries as we do.  They’re buying what they need for just a day or two, ensuring that whatever they buy is very fresh whether it’s produce, seafood, breads, pasta, and cheeses.

You notice I didn’t mention beef, pork, and chicken.  That’s because there is far less meat produced in the Mediterranean area; so they rely more on a meal of fresh vegetables, legumes, grains, and ﬁsh, with fruit for dessert.

It’s actually amazing how many diﬀerent ways you can prepare these foods, with each country having its own distinctive ﬂavor.  Italian dishes are rich in basil and oregano.  In France, Herbes de Provence (a blend of such herbs as thyme, rosemary, savory, fennel and lavender) is widely used.  If you travel to Turkey, you’ll ﬁnd a generous use of cumin, paprika, mint, and allspice.

When Americans eat at a Mediterranean restaurant in the United States, most of the time they’re not really eating authentic Mediterranean cuisine.  I’ve traveled to such places as Italy, Greece, Spain, France and Turkey, experiencing their delicious cuisines.  Then I come home, hoping to enjoy those ﬂavors again and end up being disappointed.  Thank goodness for the ability to cook at home to replicate those enjoyable times abroad.

Instead of duplicating what you would get in these countries, our restaurants put their own spin on it and most often, an unhealthy spin.  Let me give you an example.  But ﬁrst, I want you to think about what you’d expect to be served when you order Fettuccine Alfredo.  Would you say, “fettuccine cloaked in a white creamy sauce”?  If you did, that is so far from being the authentic dish.

I’ve eaten at the Original Alfredo’s in Rome and had traditional Fettuccine Alfredo.  In fact, when I was very young and my folks took my family to Italy, we had the opportunity to meet Alfredo, the creator of the dish.  What he served, which he prepared at our table, was a light, airy dish simply made with fresh fettuccine, a little butter and four types of cheeses, all tossed together.  Not an ounce of cream went into the dish.  Once you’ve tasted the real thing, you’d be sadly disappointed eating it in American restaurants.

In Greece, my husband and I dined at a restaurant where the owner grew olive trees in order to make his own olive oil for his restaurant.  I kid you not—you literally could just drink the oil from a glass it was so delicious.  The ﬁsh we were served was only hours old.  Have you ever had just-caught ﬁsh?  If everyone had the opportunity to eat fresh ﬁsh no one would say, “I don’t like ﬁsh.  It just tastes ﬁshy.”  Yes, ﬁsh does taste ﬁshy when it isn’t fresh.

I realize that most of us have no choice but to rely on the grocery store for what we eat, at least during the winter.  But during the summer, ﬁnd a local farmer’s market and experience what fresh really tastes like.  Try to become a “locavore”, a person who eats foods that are grown locally.  Buy your ﬁsh from a ﬁshmonger.  Try to eat like someone from the Mediterranean.  Your heart will thank you. 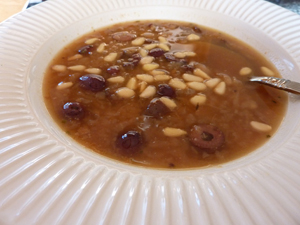 Directions:
In a medium pot, heat the oil over medium heat.  Add the sliced onion, sautéeing until browned and caramelized.  This could take about 5-10 minutes.

Add the broth and beans.  Bring to a boil and then lower the heat to simmer.  Cook for 15 minutes.  Using a potato masher, gently mash the beans until they are slightly broken up and start to thicken the soup.

Add the olives, raisins, orange zest and thyme, simmering for another 20 minutes.

Season to taste with salt and pepper.

Stir in the Marsala wine and serve immediately, topped with pine nuts.