In time for National Mediterranean Diet Month, we caught up with John Mariani, author of the newly released, How Italian Food Conquered the World, You may know John as a proliﬁc writer, publisher and reviewer.  He is the food and travel columnist for Esquire magazine and wine columnist for Bloomberg News, and is a three-time award nominee by the James Beard Foundation.  He is also publisher of Mariani’s Virtual Gourmet Newsletter and has written other highly regarded food books. 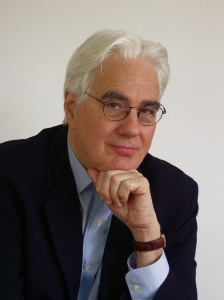 We were surprised – and delighted – that Oldways was included in How Italian Food Conquered the World!  John writes about Oldways’ role in bringing the Mediterranean Diet and the Mediterranean Diet Pyramid to the U.S. and discusses how Dun (our founder) came up with the idea for Oldways. Here John discusses his new book, the history of Italian food, and the impact of the Mediterranean Diet on the food scene today. Oldways:  Tell us about How Italian Food Conquered the World. JM: Ten years ago I might have entitled the book How Italian Food Conquered America, but since then it’s become so apparent that a cookery once thought of as common and cheap has risen around the world to become the most popular and stylish, from Berlin to Beijing, from New Zealand to New Delhi. I quote a food writer from the Times of India who wrote about new restaurants in Mumbai, saying, “In the past few years, world-class Italian restaurants in ﬁve-star hotels jostled for attention with the standalones like Giovanni, Mia Cucina, et al. Please note how not a single French restaurant opened even in the distant past.” I was just in Paris last week where the old hotel newly renovated has both a French restaurant and a very popular Italian one called Il Carpaccio—unheard of even ﬁve years ago! My book describes how, since the days of the Roman orgies and enduring poverty of the 19th century to the Italian-American contribution and the availability of ﬁrst-rate Italian ingredients in the 1980s, Italian food has steadily risen to pre-eminence. Oldways: In your research for the book, what surprised you the most? JM: Probably how consistently impoverished Italy was through centuries upon centuries of war, famine, plagues, and agricultural ignorance, and how there was little that we would think of as Italian food being served at the aristocratic courts of the Renaissance right through the 19th century because it was always based on elaborate European concepts.  Oldways: You talk about how the ﬁrst “Italian American” meals (i.e., chicken parmigiana, Caesar salad) were nothing like the ones found in Italy.  What makes the perfect traditional Italian dish? JM: To me, you begin with an antipasti table of salume, cheeses, peppers, etc, then a sensible plate of a regional pasta, e.g., a Ligurian pesto or a Roman spaghetti alla carbonara, then a simple main course like grilled ﬁsh with spinach and olive oil, then perhaps a few biscotti with espresso.  Oldways:  You tell the story about how on your honeymoon in 1977, driving back and forth across the U.S., you and your wife found disappointing restaurant meals even in places such as New York and New Orleans. At one point, your wife burst into tears and said, “We can’t go on eating like this all the way to California.”  Did you ever think the food scene in America would change? JM: There were rumblings on both coasts, certainly what Alice Waters was doing at Chez Panisse, which was to ask why ingredients were so poor in the USA compared to Europe, and the media’s infatuation with France’s la nouvelle cuisine at that time spurred more interest among smart young chefs—many who came from the counterculture movement of the 1960s and 1970s—who strove to make their mark making what in the 1980s became known as New American Cuisine. Oldways: Thanks for discussing the Mediterranean Diet (and Oldways!) in your book. What do you remember about that time in the early 90s when no one cooked with olive oil, etc.? JM: Absolutely! Butter still ruled and olive oil was still restricted to Mediterranean restaurants, Italian, Greek, Middle Eastern.  But as better olive oil became available — who’d ever even heard of “extra virgin olive oil” before 1985? — there was more interest in it, driven by the media again, who loved the whole idea of the Med Diet at a time when aﬄuent Americans began worrying about their health.  Oldways: You write that the Med Diet “took the wind out of those critics who decried Italian food as heavy and unhealthy.”  Do you think the introduction of the Med Diet in the U.S. helped to return Italian cooking here to its roots? JM: Very, very much so. All the talk about olive oil being better for you than butter or lard or margarine gave great impetus for Italian and Italian-American chefs to focus more on what had for a century been what Italians were eating in Florence, Rome, Naples, etc. Also, they could do just that because by then chefs here had access to true Prosciutto di Parma, Parmigiano-Reggiano, funghi porcini, and so much else being shipped over by FedEx and DHL, which was critical to getting fresh ingredients.