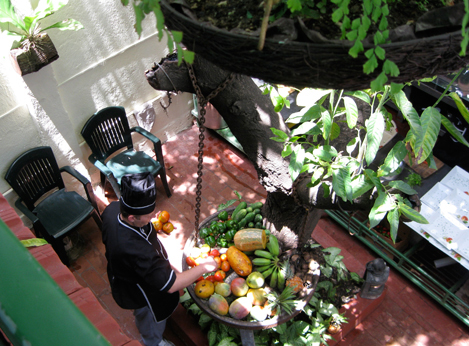 The restaurant in Cienfuegos, on Cuba’s south coast, is called El Tranvia (Streetcar) and it’s only been open for three months. Burly Loimir Delgado runs it, with his 65 year old mother, while his brother ﬁshes in the bay to provide a steady supply of fresh seafood. Upstairs, a 1950s-era streetcar has been turned into a bar. Downstairs, in a professional kitchen open to the shady courtyard, a chef garnishes plates, while his assistant (above) plucks guavas from a giant bowl of fruit. We seat ourselves in two rooms ﬁlled with themed memorabilia (from the days before General Motors bought up the city’s streetcars and removed them, to encourage Cubans to buy cars) and sip piña coladas and mojitos brought to us by uniformed servers. 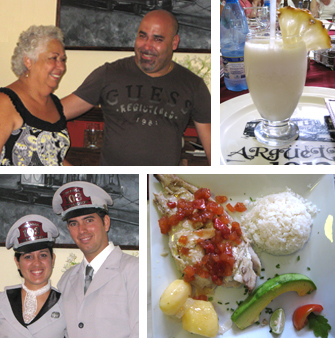 Private enterprise has come to Cuba, and it’s nowhere more evident than in the home-based restaurants known as paladars (paladares in Spanish). Some Cubans oﬀered meals illegally in their homes before 1993. But in that year, after 85% of the Cuban economy collapsed upon the disintegration of the Soviet Union, the Cuban government legalized private, home-based restaurants. Still, the oﬃcial limit was 12 diners, and food was hard to buy in quantity, limiting the success of paladars.

In 2010, restrictions were lifted, which is what made it possible for my busload of 28 touring singers to stop at El Tranvia for lunch earlier this month. We enjoyed our welcome drinks, buttery garlic bread, ﬁsh with guava salsa, and an incredibly creamy ﬂan, after which Loimir passed out business cards. “Write us a nice review on TripAdvisor,” he asked, in his excellent English. Only about 4% of Cubans have internet access, but Loimir doesn’t care; his market is the growing ﬂood of tourists from around the world – including the new trickle of American visitors like us. 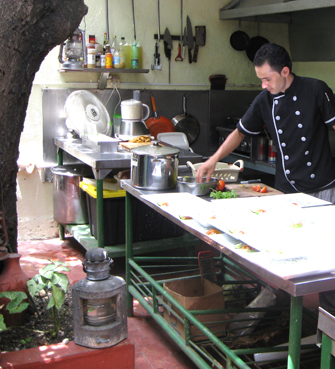 This was our second paladar experience; a few days before, we had dined at San Cristobal in Havana – an establishment that, under chef/owner Carlos Cristóbal Márquez Valdés (below), has already climbed up the TripAdvisor ladder to be rated #2 out of 191 restaurants in Havana. Here the obligatory mojitos were followed by a wonderful tapas-like assortment: two kinds of ceviche, tiny taro fritters, Spanish omelet, Cuban prosciutto, smoked salmon, olives, eggplant spread, and plaintain chips. Next came a cheese plate, then our choice of entrée: shrimp, ﬁsh, Cuban-style beef, lamb, or lobster with side dishes of rice-and-beans, sweet potatoes, and cold marinated vegetables. Another ﬂan, this time studded with dried fruit, ﬁnished oﬀ the meal

As at El Tranvia, the San Cristobal paladar took over the ground ﬂoor of a family home, this time with a nostalgic 1930s theme. We sat at a long table covered in an embroidered cloth and laid with matching gold under-plates, porcelain dishes and matching glassware – all somehow procured (like the kitchen equipment and other ﬁttings at El Tranvia) in a country where there are few stores selling much of anything.

Both paladars were in stark contrast to the state-run restaurants, where crab soup was thick with uncooked ﬂour, the ﬁsh was dry and over-salted, and we were entertained by (according to our guide) “the worst piano player in Cuba.” We hope that Cuba can incorporate the best of private enterprise – the paladars – into its society without losing the country’s strengths, like its education and healthcare systems, its close communities, and its great support of music and the arts. (Cynthia — who just got back from a week in Cuba singing with 110 other women from Voices from the Heart.)