Keys, often considered the ﬁrst to salute the Mediterranean Diet as a healthy eating pattern, may not have carried out his research in a way that would be considered state of the art today, and the nature of science is such that we’ve since ﬁne-tuned or even disproven some of his initial hypotheses about diet.

Stop by PubMed, where the US government maintains a database of most of the world’s medical and nutrition research, and search for “Mediterranean Diet” and you’ll see just how robust the pool of data is, with more and more studies every year. In the ﬁrst few decades after Keys’ research, only a few studies were carried out each year. And then things exploded, totaling 465 studies last year, and 445 so far this year, with two months still to go. Whether Ancel Keys was right or wrong about everything back in the infancy of nutrition research doesn’t matter; responsible dietary policy is never based on just one person’s assertions, but on the scores of scientists who have followed. 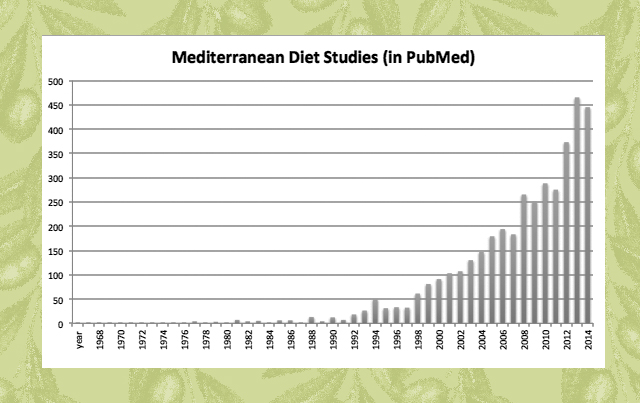 Every month Oldways reviews the latest research, and adds key studies to our website’s Health Studies database, translating the jargon of PubMed and its studies into understandable News You Can Use. Here are just a few of the most recent ones:

Our knowledge about nutrition has come a long way since 1958, and not just as it relates to the Mediterranean Diet. Despite the confusion that seems to reign in the popular press and on the web, we’re convinced that there’s common ground among nutrition experts of all stripes. That’s why we’re gathering experts who support the Paleo diet, vegan diets, and everything in between (including, of course, the Mediterranean diet!) at our Finding Common Ground conference next month in Boston. Stay tuned for their Consensus Statement on November 18!