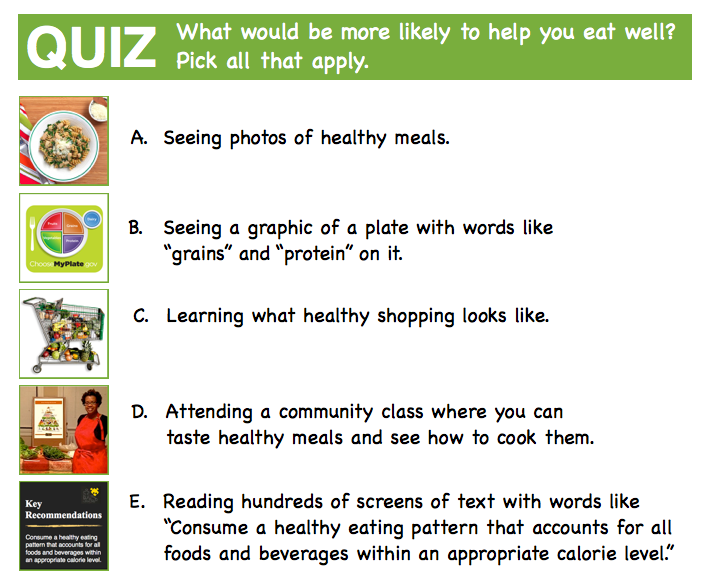 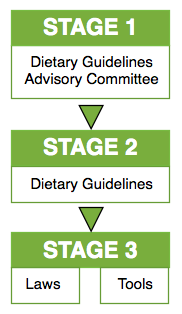 The right tools matter, especially when it comes to guiding folks to healthier eating habits. So why does the US government use big words (E) and non-food images (B) as their principle tools, instead of real food and real people? We’ll get to that in a minute, but ﬁrst a step back for some context.

Writing the Rulebook, aka Dietary Guidelines

There’s been a lot of talk about how the US Dietary Guidelines are a two-part process. In Stage 1, leading scientists meet for nearly two years to review the latest nutrition science, resulting in the Dietary Guidelines Advisory Committee (DGAC) Report. Then, in Stage 2, politicians create the actual Dietary Guidelines, which all too often skew the science to react to lobbyists.

There’s a Stage 3, though, that’s often forgotten. And it could be the most important part. Even if the DGAC Report is excellent (as it was this year) and the actual Guidelines follow the science (which they didn’t entirely this year), what happens next matters. Once the Dietary Guidelines exist, their impact depends on having both laws and useful tools that support them.

This third stage is just as vulnerable to political forces as the others. Although Federal law (7 USC Sec. 5342(a)(1) says that the Guidelines “shall be promoted by each Federal agency in carrying out any Federal food, nutrition, or health program,” that doesn’t generally happen.

To cite just one example, in 2005, for the ﬁrst time, the Dietary Guidelines said, “Make at least half your grains whole.” Following the law above, you’d think the federal school lunch program would have been required to make half or more of all grains whole starting in 2005, or perhaps 2006. Nope. New school food rules for whole grains didn’t start to phase in until 2012, and once they reached the half-your-grains-whole level in 2014, politicians bowed to pressure and rolled requirements back from 50% of grains whole to 40%.

Government gridlock delayed the 2015 Dietary Guidelines to early 2016 — and they won’t even be available in printed form or a downloadable PDF until “in 2016” (according to one page) and “in the coming months” (on another).

Government gridlock alone proves to us that the work of Oldways and other nutrition education organizations is so essential. We’re not constrained by election-year politics, DC gridlock, or lobbying pressures, so we have great tools, available now — like our new Oldways Cart. But don’t believe us. Here are just a few of the many recent emails we’ve received, telling us that Oldways tools and resources really do change the way people eat:

“… the excellent design and readability of your teaching resources is both refreshing and eﬀective. Your work makes mine more eﬀective as I dedicate my days to keeping patients healthy.”

“I have been searching the internet for good whole grain recipes… your website by far has the best ones! I love how many diﬀerent kinds of grains you feature and how many diﬀerent ﬂavor proﬁles and ethnic backgrounds are featured.”

“… We passed them out as handouts for a workshop [at the County Oﬃce of Aging]. The seniors loved them; they’re very interested in the Mediterranean Diet because of its eﬀect on aging. They like the idea of eating traditional foods.” 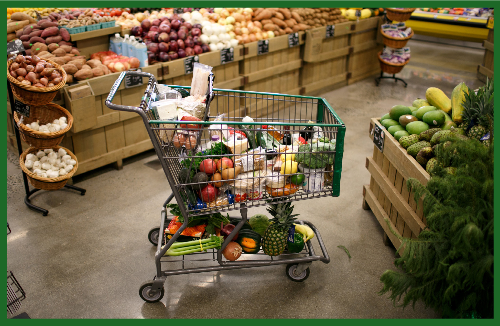 “The students loved that the curriculum not only addressed nutrition and health, but had a strong cultural component that allowed them to connect on a deeper level.  I think in part because of that connection, participation was high throughout the program.  Everyone in the class enjoyed learning about new spices and trying new recipes.  All the class participants have added more vegetables to their diets as a result of what they learned from ATOAH.”

- Dietitian and volunteer teacher in Detroit, using our “A Taste of African Heritage” six-lesson curriculum

Hmm. I wonder if anyone ever writes to USDA saying “Oh, I just love your Dietary Guidelines. They changed my life!” Maybe that will happen someday, after we drive politics out of the process and recognize how important eating well can be to our nation. In the meantime, however — Oldways is here for you, with practical tools that work.