In honor of the Fifth World Pasta Day & Congress on October 25, we wanted to share some truths about this important traditional Mediterranean diet staple. From five debunked myths to five tips to enjoying pasta, and even five good reasons to love pasta, educate yourself on this healthy and delicious food. Then go out and try any one of the 400-plus types of pasta.

We loved these articles from the International Pasta Organization so much, we had to adapt and repost them here. Click here to visit the IPO’s Pasta For All website.

Myth #1: Pasta is from China.
False: Marco Polo introduced pasta to Italy from China? A legend, helped along by the 1938 ﬁlm, “The Adventures of Marco Polo” starring Gary Cooper, which took literary license in depicting the great traveler bringing spaghetti to Italy for the ﬁrst time (around 1300). In fact, pasta dates back to ancient Etruscan civilizations. Ancestors made pasta by grinding several cereals and grains and then mixing them with water before cooking the mixture into a tasty and nutritious food product. The Italian version of noodles – spaghetti made with durum wheat – had been produced in Sicily for two centuries before Marco Polo made his way back from China.

Myth #2: Pasta makes you fat.
False: Pasta does not make you fat. With the right portions and ingredient partners, pasta can be part of a healthy diet that you follow for the rest of your life. Pasta is at the core of the Mediterranean Diet – recognized by nutritionists as one of the world’s best eating patterns – and successful at weight management since pasta is often combined with fresh vegetables, tomato sauce, olive oil and small portions of ﬁsh, legumes and other lean proteins. Portion size is a key factor in weight management: A healthy serving of pasta for an adult is one-half to two-thirds of a cup of cooked pasta. As an added bonus, the starch present in pasta is digested very slowly, so it provides a prolonged feeling of fullness. To those who think that pasta is fattening, consider that Italians eat three times more pasta than Americans, yet the adult obesity rate in in the U.S. is three times higher than in Italy.

Myth #3: White colored foods have no nutritional value.
False: Contrary to popular belief, lack of color does not indicate lack of nutrition. Think of natural unprocessed white foods like cauliﬂower, onions, turnips, mushrooms, white beans, and white potatoes – they are all nutrient-dense foods that are welcome in a balanced diet. It may surprise you to know that traditional pasta cooked “al dente” has a low Glycemic Index (GI), while bread — made from the same ﬂour and water – has a high GI. The dense structure of starches in pasta ensure it has a much more minimal impact on blood sugar. For additional health beneﬁts such as greater ﬁber and essential nutrients, there are a number of delicious whole grain pasta options on the supermarket shelf. And don’t forget to add color by loading on the veggies.

Myth #4: Gluten-free pasta is healthier.
False: Celebs like Gwyneth Paltrow and Victoria Beckham brought gluten-free diets to the forefront. Yet, while suﬀerers of celiac disease, an autoimmune reaction to gluten in individuals who are genetically susceptible, must adhere to a strictly gluten-free diet, the rest of us don’t. Keep in mind the group that must avoid gluten is small (1 in 100 people suﬀer from celiac disease). For those pursuing a gluten-free diet in hopes that they will lose weight, celiac authority and assistant Harvard professor Dr. Daniel Leﬄer warns that the opposite eﬀect is just as likely and that adhering to a gluten-free diet is often associated with weight gain. Therefore, gluten-free products aren’t necessarily the answer. In addition, gluten positively impacts pasta quality and gives it a speciﬁc texture, making it ﬁrm to the bite (“al dente”) after cooking.

Myth #5: The wheat we eat today is diﬀerent than that of our grandparents due to GMOs.
False: Today’s wheat grain is not much diﬀerent than it was 50 years ago, according to Joseph A. Murray, a professor of medicine at the Mayo Clinic and the president of the North American Society for the Study of Celiac Disease who has also studied wheat genetics. Genetically modiﬁed (GM) wheat is not commercially grown in the United States, in line with European and worldwide wheat producers. And, in response to concerns that today’s wheat contains more gluten, USDA researcher Donald Kasarda, who has been studying wheat genetics for decades, found that gluten content in wheat has not in fact increased. 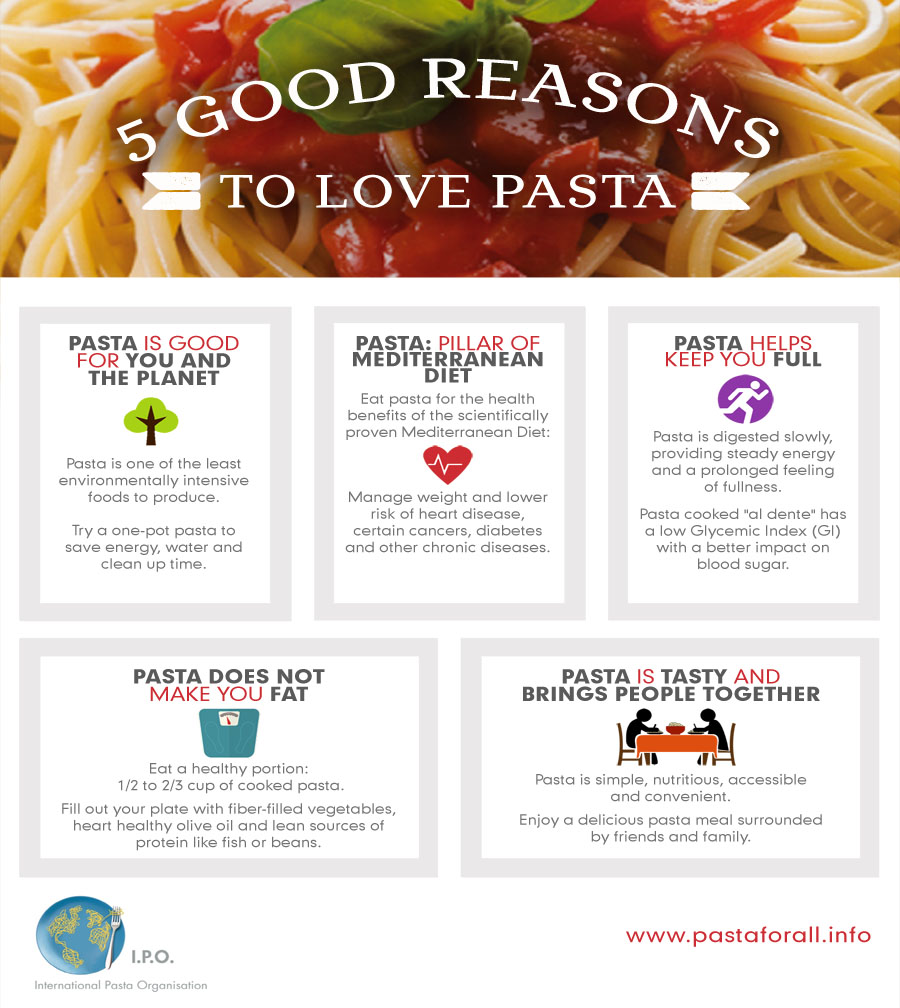 1. Draw inspiration from the Mediterranean. Nutrition experts agree that the Mediterranean Diet is one of the healthiest eating patterns on the planet. Enjoying a healthy pasta meal, complete with olive oil, tomatoes, vegetables, and herbs, is the perfect way to honor this much-loved, healthful cuisine.

2. Eat mindfully. It is easy to keep eating and eating, especially when faced with large restaurant portions. Savor your food slowly, and be present with friends and family at the table. Pasta is a satisfying food that keeps you fuller for longer so a healthy serving goes a long way.

3. Fill half of your plate with vegetables. For a healthy pasta meal, pair ½ to ⅔ cup cooked pasta with a generous amount of veggies, a gentle drizzle of olive oil, and a healthy protein like ﬁsh, beans, or chicken. Garnish with fresh herbs for an additional layer of ﬂavor.

4. Choose complex carbs. The complex carbohydrates in pasta digest slowly, to help keep you full. In fact, many people are surprised to learn that pasta is actually a Low Glycemic index food, meaning that it has a better impact on blood sugar. Whole grain pasta, which has additional ﬁber, protein, and micronutrients, is another great way to get complex carbohydrates.

5. Try a one-pot pasta. To save energy, water and clean up time, prepare a simple pasta meal in one pot. Take a lesson from Martha Stewart – her One-Pan Pasta has been dubbed “genius” and has spread to food enthusiasts worldwide. Nine minutes, one pan, healthy dinner.