For many, spring signiﬁes rebirth and renewal. For me, it also conjures up some really vivid family meals and holiday celebrations. While I’ve never been particularly enthused by the winter holiday season (perhaps it is the summer baby in me that craves sun and green things), I’d liken my feelings to this time of year to other people’s yuletide joy.

This is the season that makes me reminisce most about my dad’s cooking: always some form of meat, gravy, and potatoes, along with dressing (he was not a light hand with the starch!) paired with tender spring beans and/or collards. And I think of my mom, as she prepared Passover staples: matzo ball soup, usually my favorite brisket with caramelized onions, and a matzo dessert kugel laced with blackberry jam, washed down with grape juice or impossibly sweet blackberry Manischewitz (aka a “wine” only a kid could love). Our much-dog-eared haggadah (ﬁlled with prayers, queries, commentary, and song for the Passover holiday) lived underneath our massive and ancient microwave, only to be unearthed once a year for our very casual seder dinners. 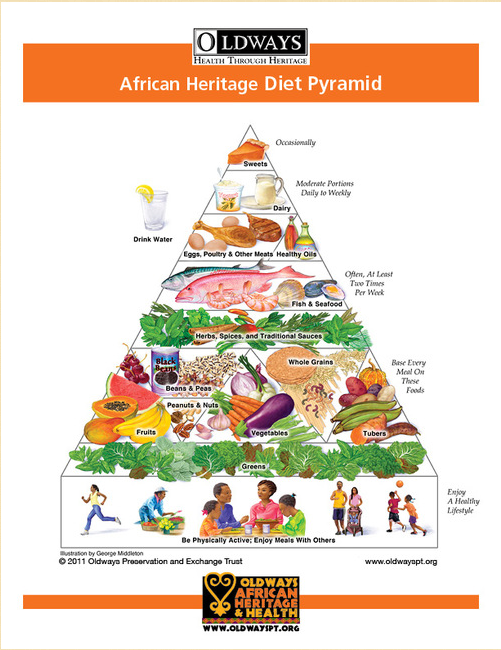 The liberation theme of Passover, a holiday that commemorates the Israelites’ exodus from Egypt, resonates on both sides of my family. Africans and Jews have traveled similar trajectories at times as strangers and outsiders, people of far-reaching diasporas, not always equal under the eyes of the law and their countrymen.

In considering ways to honor both sides of my lineage and to share my table with all of “my people,” the Passover seder plate, with its full palette of colors and its variety of tastes (salty, bitter, sweet), comes to mind. This plate is the centerpiece of the table during the ﬁrst two nights of Passover. It is referenced during readings from the haggadah, and it contains important symbols of the Israelites’ time in Egypt. Food historian and fellow African American Jew Michael Twitty recreated his own version of the plate based on the foods consumed by his African ancestors. But as it turns out, the seder plate is very grounded in the Oldways African Heritage Diet Pyramid. I’ve explained the elements below and how they correspond with the Diet Pyramid.

Another easy way for me to incorporate African heritage foods into my Passover is through tzimmes, a traditional vegetable stew (meaning “big fuss” in Yiddish). It is a staple of the Passover table that is not unlike the North African tagine, usually served with meat such as brisket. But it doesn’t have to be! This dish, after all, is a perfect vehicle for the beautiful tubers, fruits, and vegetables you’ll ﬁnd in Lessons 5 and 6 of the A Taste of African Heritage curriculum. My version is less traditional because I’ve chosen to roast my vegetables instead, giving them more texture, and I’ve also added some intrigue with the slightly sweet and aromatic North African spice blend, ras el hanout. I squeeze just a bit of fresh orange juice over the roasted medley before serving.

Note: using some cosmic purple and yellow carrots make an attractive presentation, but note that they may take longer to roast than orange carrots. You can also add chopped roasted nuts like almonds or pecans for additional texture.

Of course, not everything on the African Heritage Diet Pyramid lends itself so easily to Passover celebration. Consequently, no matter how you celebrate, you’ll have to forgo some signiﬁcant African heritage foods during the 8 days of Passover if observing the rules. The biggest culinary prohibition during Passover is that a Jew is not to consume leavened bread in commemoration of the Israelites’ haste in ﬂeeing Egypt. This sounds simple, but it isn’t. Wheat, rye, barley, oats, and spelt that have not been completely cooked within 18 minutes after coming into contact with water are considered oﬀ limits. After this point, the grains are considered “risen.” Additionally, the rules become even more complicated depending on your Jewish origins. For example, Beta Israel (Ethiopian Jews) do not eat fermented foods like yogurt; many Ashkenazi (central or Eastern European Jews) do not eat rice, corn, millet, beans, lentils or peas, while Sephardic and Mizrahi  (Jews from the Iberian peninsula and the Middle East) do not have these restrictions. The good news, however, is that there is still a wealth of leafy greens, fruits, vegetables, and tubers in the African heritage diet from which to choose when designing your Passover menu. And for those worried about their whole grain consumption during the month, “supergrain” quinoa is there to save the day—the gluten-free seed that is prepared like a grain has been approved as kosher for Passover. Enjoy the tzimmes above with some quinoa; together they make a well-rounded, African heritage Passover dish!