If you love food and travel, Turkey should be the next destination on your list!

Turkish cuisine is a melting pot, greatly inﬂuenced by its Ottoman heritage and shaped by Central Asian, Middle Eastern, and Balkan inﬂuences. You won’t ﬁnd food like this anywhere else in the world.

Shop in a spice market. Linger over drinks and a spread of meze (small plates) with friends. Sip a cup of intensely ﬂavored Turkish coﬀee, then have your fortune read from the coﬀee grounds. Relax in a neighborhood meyhane (tavern) alongside locals. All this against a backdrop of ancient ruins, historical sites, and bustling cities!

At Oldways, we’re drawn to Turkey time and time again to learn more about this fascinating destination. That’s why we’re organizing a weeklong, food-focused tour of Turkey with Chef Ana Sortun, Turkish cuisine expert. We’re inviting food lovers to join us. We’ll explore two cities, Antalya and Istanbul, and enjoy behind-the-scenes food experiences like private cooking demonstrations, market tours, a visit to a local tahini producer, and much, much more.

5 reasons Turkey is a destination for food lovers 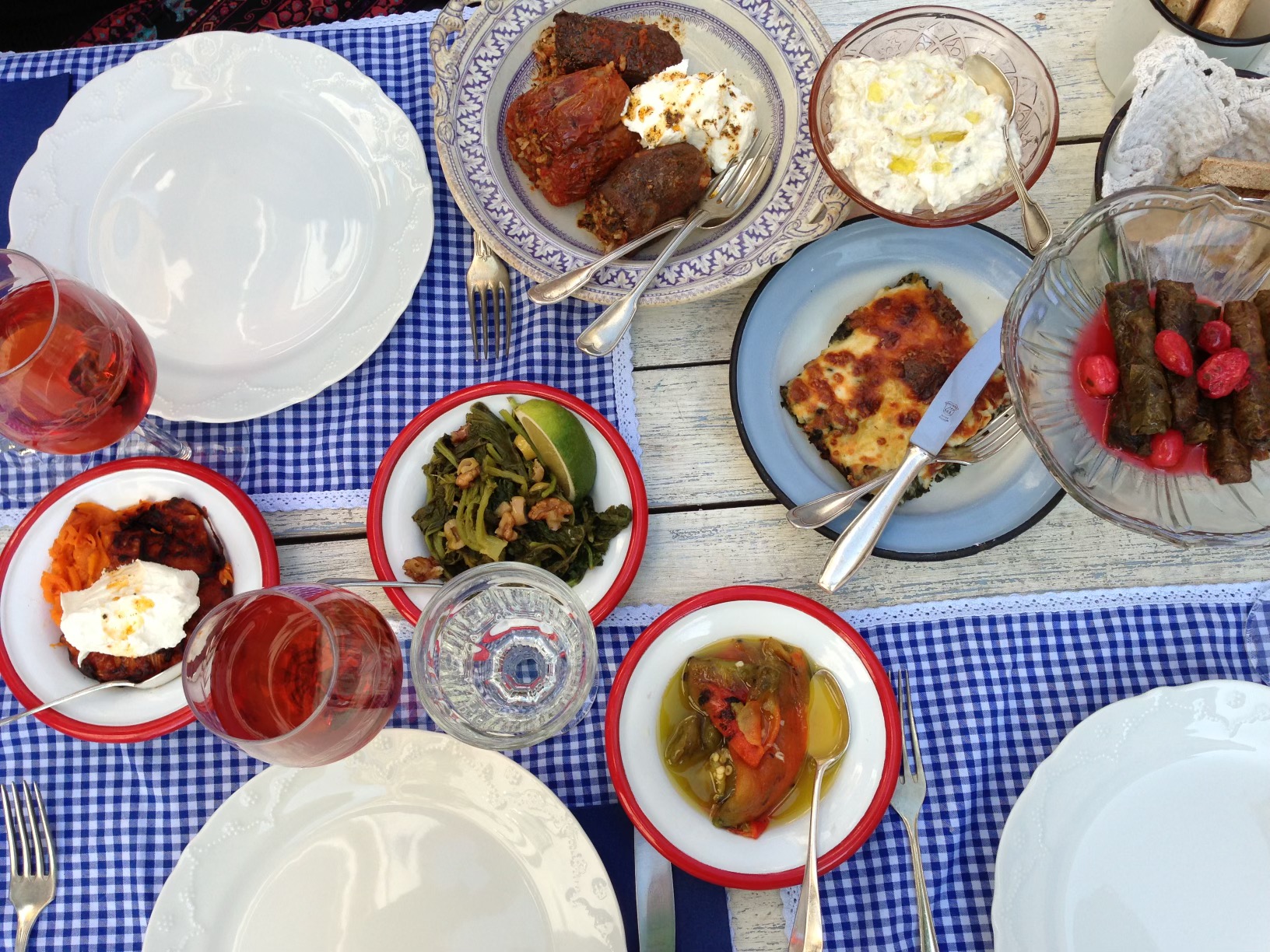 A selection of meze in Turkey

Meze are small plates served and shared among a group. It’s the perfect way to convene with friends and try an assortment of diﬀerent foods.

If you really want to immerse yourself in another country’s culture when traveling, try the street food! You’ll get a taste of the local cuisine, as well as a chance to chat and interact with the experts who made your food. In Turkey, you’ll ﬁnd a broad selection of delicious street food options.

Here’s Chef Ana Sortun’s guide to a few of her favorites: 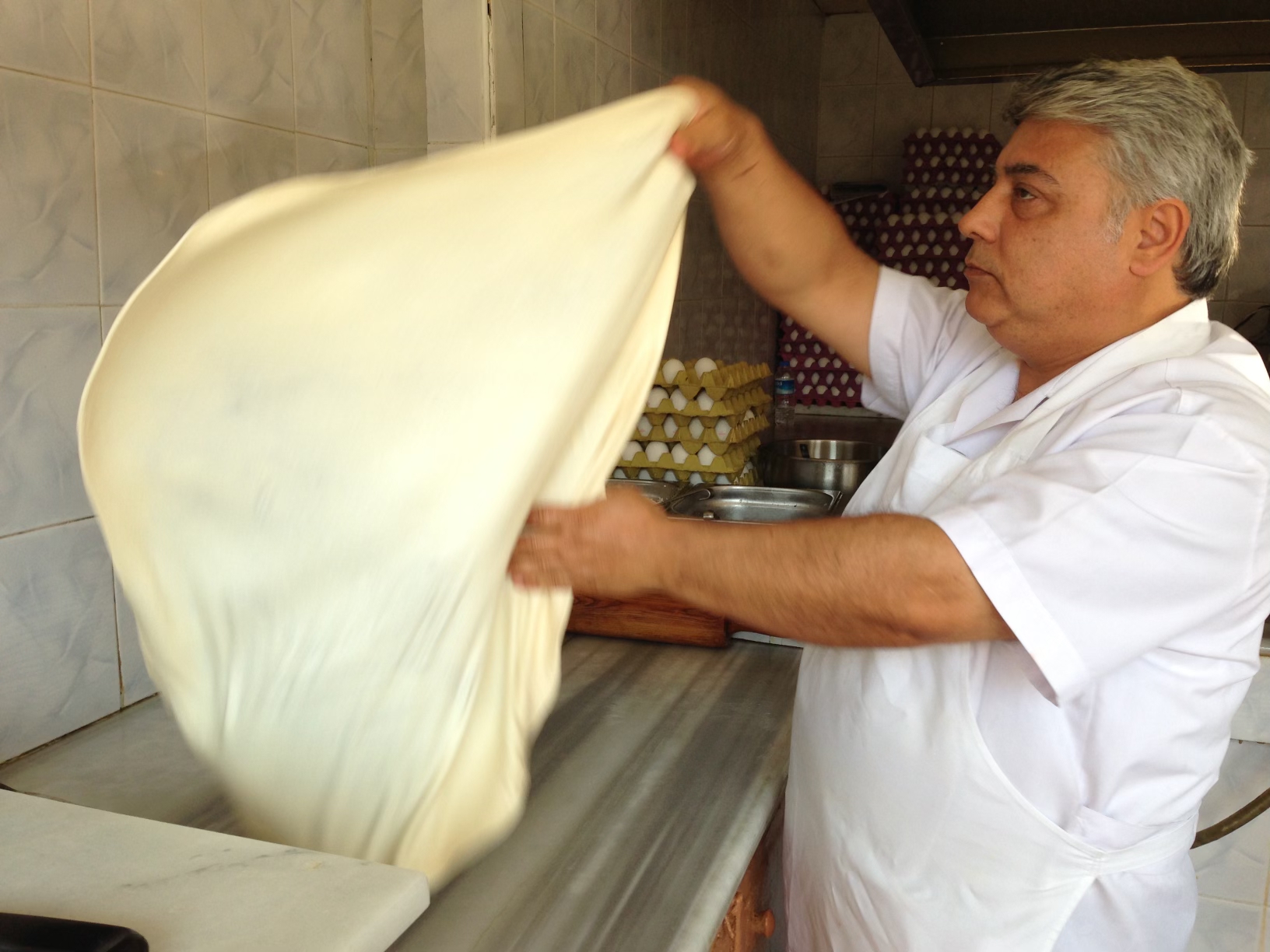 Watching a preparation of street food in Turkey

Gozleme: yuftka dough (ﬂour, water, and oil formed like a tortilla) is folded around a cheese or spinach and cheese ﬁlling, and crisped on a saj (domed griddle). It’s a sort of stuﬀed Turkish pancake.

Fried mussels: shucked, battered, then fried in olive oil. Served on a skewer with an almond and garlic sauce called tarator.

Kumpir: baked potatoes that are split in half. The insides are scooped out and mixed with yogurt and put back into the potato. There is a bar of toppings to choose from.

Su borek: a pie made from a fresh cheese, eggs, butter, and yuftka pastry. The pastry becomes noodle-like and this rich snack is cut up into little pieces so that you can eat it on the street.

Kokorec: lamb intestines skewered and roasted with oregano and chiles. Served as a sandwich.

Fish sandwich: a simple fried or grilled ﬁsh sandwich made with bonito— the most common ﬁsh of the Bosphorus—with onions, tomatoes and fresh baguette. Called balik-ekmek, it is mostly sold in old-fashioned ﬁshing boats along the Bosphorus. 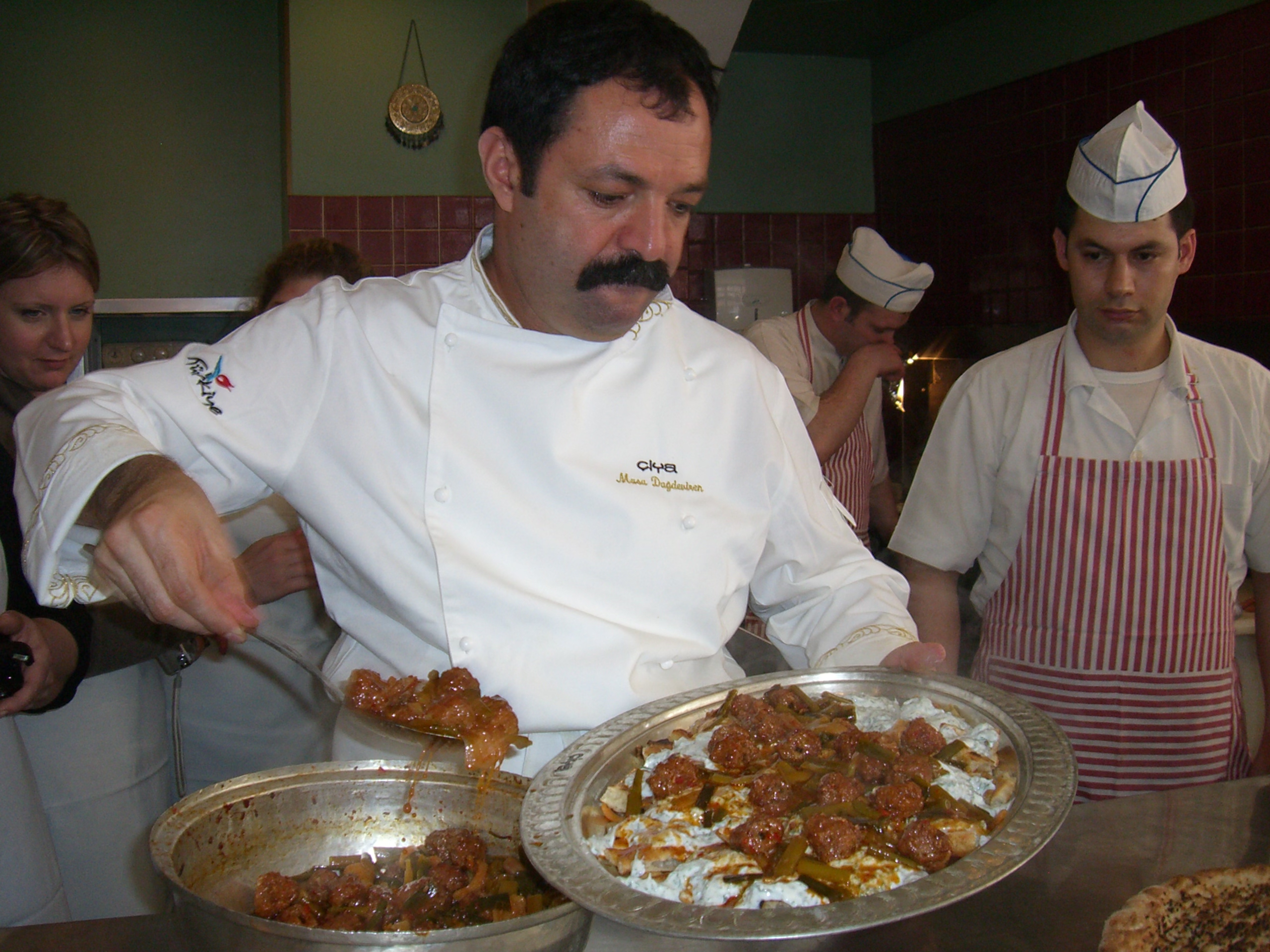 Chef Musa Dağdeviren with an Oldways tour group in Turkey

Çiya is an iconic Istanbul restaurant from Chef Musa Dağdeviren, made even more famous by the Netﬂix show Chef’s Table. “Chef Musa is one of the most exciting chefs I have ever worked with,” says Ana Sortun. “I would make a trip to Istanbul just for his food.”

She continued: “Musa is a culinary anthropologist. He spends a lot of time researching traditional dishes that are dying and brings them back to life at his restaurants. He seeks out local, wild foods and re-introduces them to people. His food is interesting, rich, soulful and delicious. In the past 10 years, Musa has become recognized all over the world.” 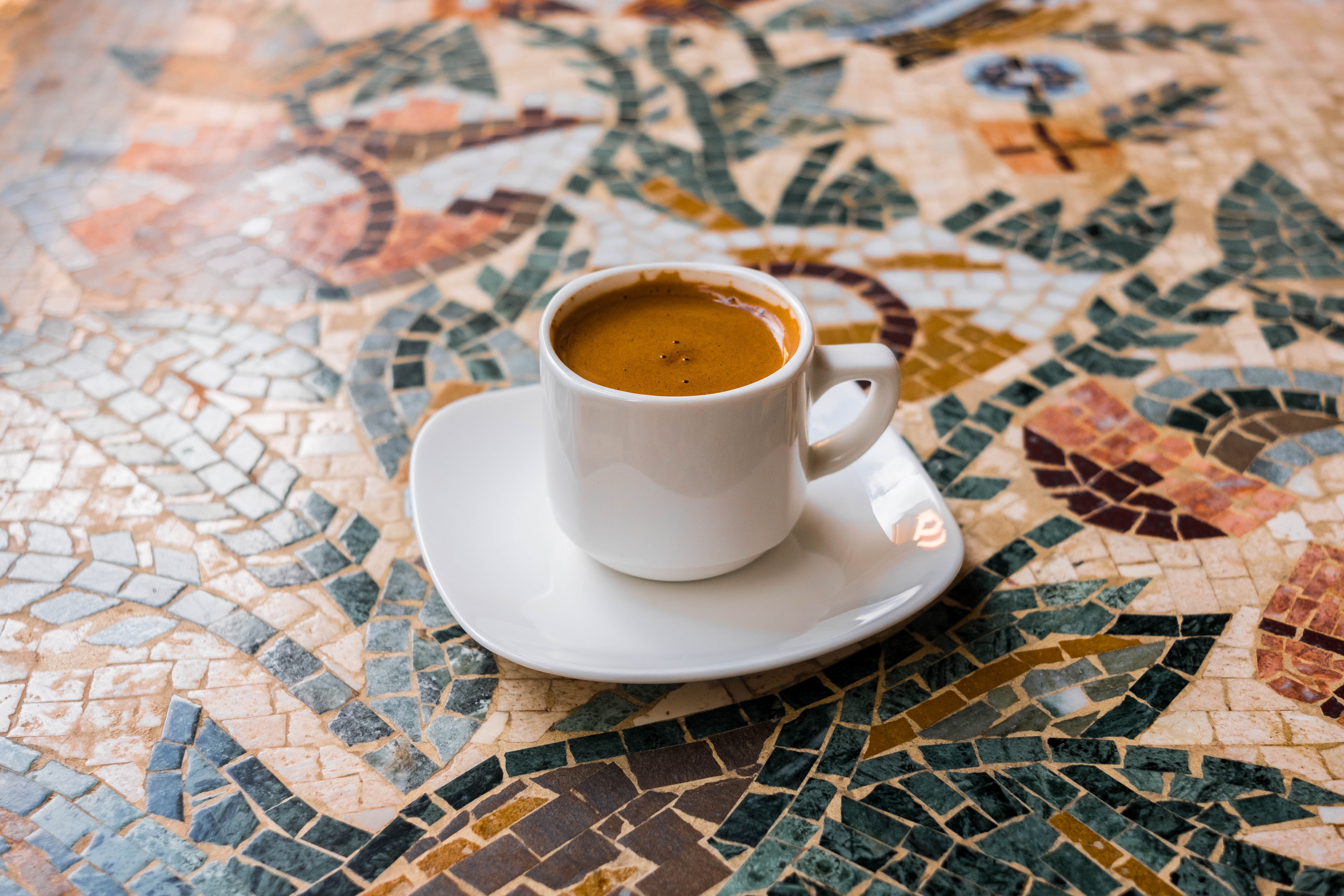 Says Chef Sortun in her book Spice, Flavors of the Eastern Mediterranean:

“Coﬀee plays a special role in both the culture and cuisine of Turkey. Beans are ground to an ultraﬁne texture, and the coﬀee itself can be served with a little—or a lot—of sugar. Usually served after meals, Turkish coﬀee is meant to be enjoyed with others, and the reading of fortunes in the grounds is one important part of the social ritual.”

Did you know Turkish Coﬀee Culture was admitted to UNESCO’s Intangible Cultural Heritage list? There’s a saying in Turkey that “A cup of coﬀee will be remembered for 40 years.”

Your kitchen pantry will never be the same once you try these delicious Turkish ingredients! Be sure to stop and pick some up on your visit to Turkey—you won’t ﬁnd all of these ingredients, of such high quality, in U.S. supermarkets. 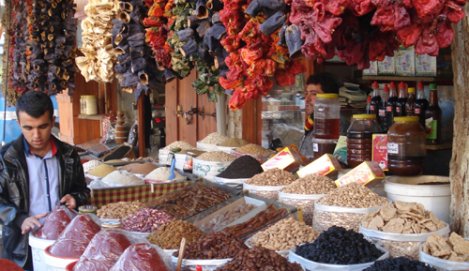 Spend 7 days immersed in the food, history, and culture of Turkey with Chef Ana Sortun and Oldways
March 20-27, 2022

You could enjoy this Turkish breakfast (with a view of Istanbul!) on our culinary tour in March 2022. This is one of the hotels we will be staying in! Photo courtesy Novotel Istanbul Bosphorus

Learn about Turkish food, ingredients and cooking with Chef Ana Sortun, one of the great experts in the U.S. on the subject. We’ll also experience the history and culture of two very diﬀerent cities—Antalya on the Mediterranean and the bustling, international and exotic city of Istanbul. It is an experience not to be missed!

On our trips, you don’t just get to taste a fabulous meal—you get the recipes and knowledge to bring these ”old ways” home with you. We put our heart and soul into planning each day. And in between all the excitement, you’ll have time to shop or take a siesta, and then relax in luxurious hotels at the end of the day!