ONE on ONE: Food and Culture

A sponsored article from the Oldways Nutrition Exchange 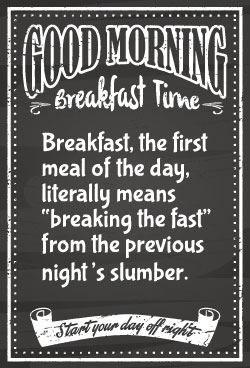 If your mom told you to eat breakfast before you headed out the door, she was on to something! For most people, having a nutritious bite in the morning provides them with energy, setting the tone for the rest of their day.

The Oldest Breakfast
Throughout history, religion, geography, trade, and industrialization impacted what we ate and when, and the reach of the Medieval church demonstrates this point. Archeological evidence shows that breakfast was eaten as early as prehistoric man. A long timeline of eating a morning meal followed until the 13th century when the dominance of the Medieval Catholic Church intervened.

Church leaders of the time preached against physical pleasure and promoted fasting in its place. Tied to the apron strings of gluttony, eating in the morning was demonized and deemed one of the deadly seven sins. Only children, the elderly, or the inﬁrm were given a free pass. Others would have to wait until mid-day for sustenance, or be subjected to ridicule.

Thankfully, King Francis I of France (1494-1547) – as any food-loving French king would do – brought breakfast back into fashion, declaring it proper to eat a morning meal at 9 a.m.

By the 17th century, breakfast was commonplace in Europe and in the newly-settled land of America. Generally, the morning repast might include meats and bits of bread left over from the previous evening meal, and for some, wine or beer. As global trade expanded, coﬀee, tea and chocolate were added to the lexicon of breakfast foods.

Celebrating the Morning Meal
Breakfast in America by 1750 was celebrated, so much so that breakfast rooms were designed exclusively for this morning pleasure. The upper classes enjoyed a meal of bacon, mutton chops, eggs, corn cakes or muﬃns, while more impoverished folks ate a simple gruel or porridge, or stale bread and ale. Drinking wine, cider or beer at meals was a common practice, most likely due to the unsanitary conditions of the water supply.

During the 19th and 20th centuries, as more people were working in the city and in factories, eating habits shifted to conform to the work-day routine. Rising earlier, workers needed sustenance to hold them until their next meal, which they no longer ate at home. As the industrial revolution took hold, the punch clock, rather than the rising and setting sun, dictated when people ate their meals. 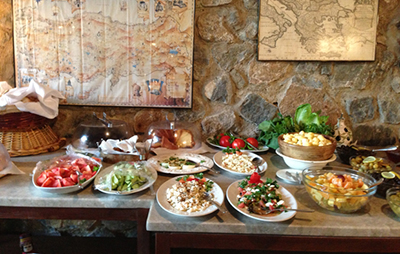 A traditional Turkish breakfast buﬀet.Photo from the 2015 Oldways Turkey Culinaria.

Breakfast Around the World: From Biscuits to Flatbreads
Some of the foods we ate in the morning evolved over the centuries and varied from region to region, but many of them are still eaten today. Around the Mediterranean, Greeks, Turks, and Syrians historically ate (and still eat) breakfast foods similar to what they had during the day, such as whole grains, vegetables, yogurt, and ﬂatbreads. The Spanish might fancy churros (fried fritters), a tortilla, or a pastry and coﬀee, and while Americans were ﬁlling up on a substantial meal of bacon and eggs; hot cereal, or a bread product like a muﬃn or biscuit, many Europeans started their day with hard biscuits.

The original biscuit was a ﬂat cake that was baked twice. The name, biscuit, originates from the French, bis, meaning “twice,” and cuit, meaning cooked. This method resulted in something more akin to a hard, dry cracker. In fact, in the 17th century they were referred to as “stone bread” because of their texture. These hard biscuits became a staple for soldiers and sailors for centuries, as they were a portable, practical way to preserve carbohydrates. Today, the ritual of eating these type of biscuits for breakfast is still popular in France, England, and Spain.

The lighter, ﬂuﬃer biscuits that we recognize in the United States originated in plantation kitchens of the South. Considered a quick bread, they’re made from a combination of ﬂour, butter, leavening, and milk or water; baked in an oven, or cooked on a stovetop in a skillet, or in a Dutch oven.

Eating in the 21st Century
Recent trend reports reveal the changing eating habits in America, and state that consumers are increasingly aware of the importance of choosing healthier foods, all the while, eating more frequently throughout the day.  These eating ocassions may be mini-meals or snacks, often eaten on-the-go or eaten alone, rather than “sit down at the table” meals with family.

And there may even be a blurring of meals. We already have brunch – a fusion of breakfast and lunch enjoyed on the weekend – but with so many of us on the go and out the door lickety-split, we need to eat something at 7 a.m. to keep us fueled, sometimes well past our normal lunch hour.

What’s a Mother to Do?
For busy families and hurried Millennials alike, convenience is key. Manufacturers are responding by developing healthier products in a new category dubbed breakfast biscuits, packaging them for grab-and-go ease, and sharing ideas on how to pair them with other nutritious foods for a well-rounded meal. 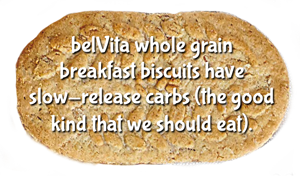 One example of this new category is belVita breakfast biscuits. (Disclosure: belVita is a sponsor of the ONE program.) Modeled on the traditional breakfast biscuits enjoyed by many Europeans today and in the past, these whole grain biscuits have slow-release carbs (the good kind that we should eat). Unlike simple carbs found in sugary foods that can spike blood sugar levels, slow-release carbs are digested slowly. This steady digestion allows our bodies to release glucose gradually, keeping us nourished with steady energy through the morning.

These ready-to-eat breakfast foods have caught on quickly and grown in popularity because of their accessibility and nutritious proﬁle. (In fact, belVita reports that around 9 billion of their biscuits are made in 14 countries around the world. If all the belVita biscuits baked in a year were laid end to end, they would wrap around the world 62 times at the equator!)

Recipe for the Perfect Morning Meal: Easy as 1-2-3
Dietitians agree that a balance of foods is important to ensure good nutrition. When creating a healthy breakfast, combine these three basic building blocks: (1) whole grains, (2) fruit or vegetable, and a (3) source of low-fat dairy or lean protein. Mix and match for endless possibilities. The following chart shows how easy it can be:

Keep plain Greek yogurt in your fridge, and toss in berries and cooked rolled oats. Warm up last night’s brown rice, and add dried fruit, cinnamon and milk. Mash an avocado, spread on a whole-grain bagel, and add a slice of cheese. Slather a pita pocket with hummus, and stuﬀ with tomatoes and cucumbers. For a convenient on-the-go breakfast, keep hard-boiled eggs on hand, and pair with banana and a few whole grain crackers. 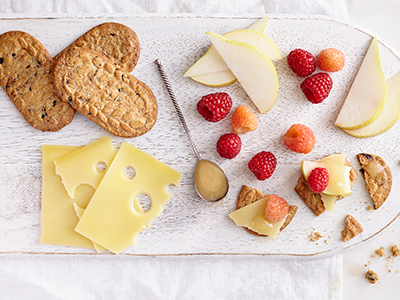 One of many delicious ways to enjoy belVita breakfast biscuits.

The sky’s the limit: come up with your own breakfast pairings, or ﬁnd additional ideas for inspiring and easy breakfast pairings in the belVita Breakfast Biscuits toolkit. Along with recipe ideas, you can learn more about the beneﬁts of slow-release carbs for 4 hours of nutritious steady energy in their video and articles.

“We can all use morning energy,” suggests Sandy Morreale, registered dietitian, “and breakfast biscuits like belVita provide 4 hours of nutritious steady energy – making this a convenient and nutritious choice for busy mornings as part of a balanced breakfast.”

Onward and Upward
With our on-the-go lifestyles, breakfast has taken on a new meaning. With the convenience of ready-made foods, combined with fresh or frozen produce, and a low-fat dairy or lean protein, we can “break fast” into our day and stay powered throughout the morning.