Stay warm this winter with the vibrantly tropical ﬂavors of Chef Kriss Koﬁ’s plant-based Caribbean cuisine. Chef Koﬁ was born to Jamaican parents, and raised in Miami, FL where he developed a love for food and foodways at a tender age. After working in his father’s restaurant in Miami, Chef Koﬁ chose to pursue a culinary career. Shortly thereafter, Chef Koﬁ joined the U.S. Army as a food service specialist. Over the course of his six-year tenure in the Army, he prepared multi-course meals for special missions for large groups of military personnel all around the world, including in Afghanistan and Germany.

Since becoming vegan in 2014, Chef Koﬁ is making his stamp in the food world as a sustainable, ital (a lifestyle tenant of Rastafari, short for vital, referring to a natural way of eating and living) vegan chef, putting a vegan twist on classic favorites. His inﬂuences include Bobby Flay, Gordon Ramsey, and Lauren Vanderpool. After graduating from the Natural Gourmet Institute, Chef Koﬁ plans to build his reputation as a world-renowned traveling vegan chef working for high-end clientele. Chef Koﬁ currently resides in Miami and New York City. Get a glimpse of his culinary creations here, and learn more about Chef in our exclusive interview for African Heritage & Health Week. 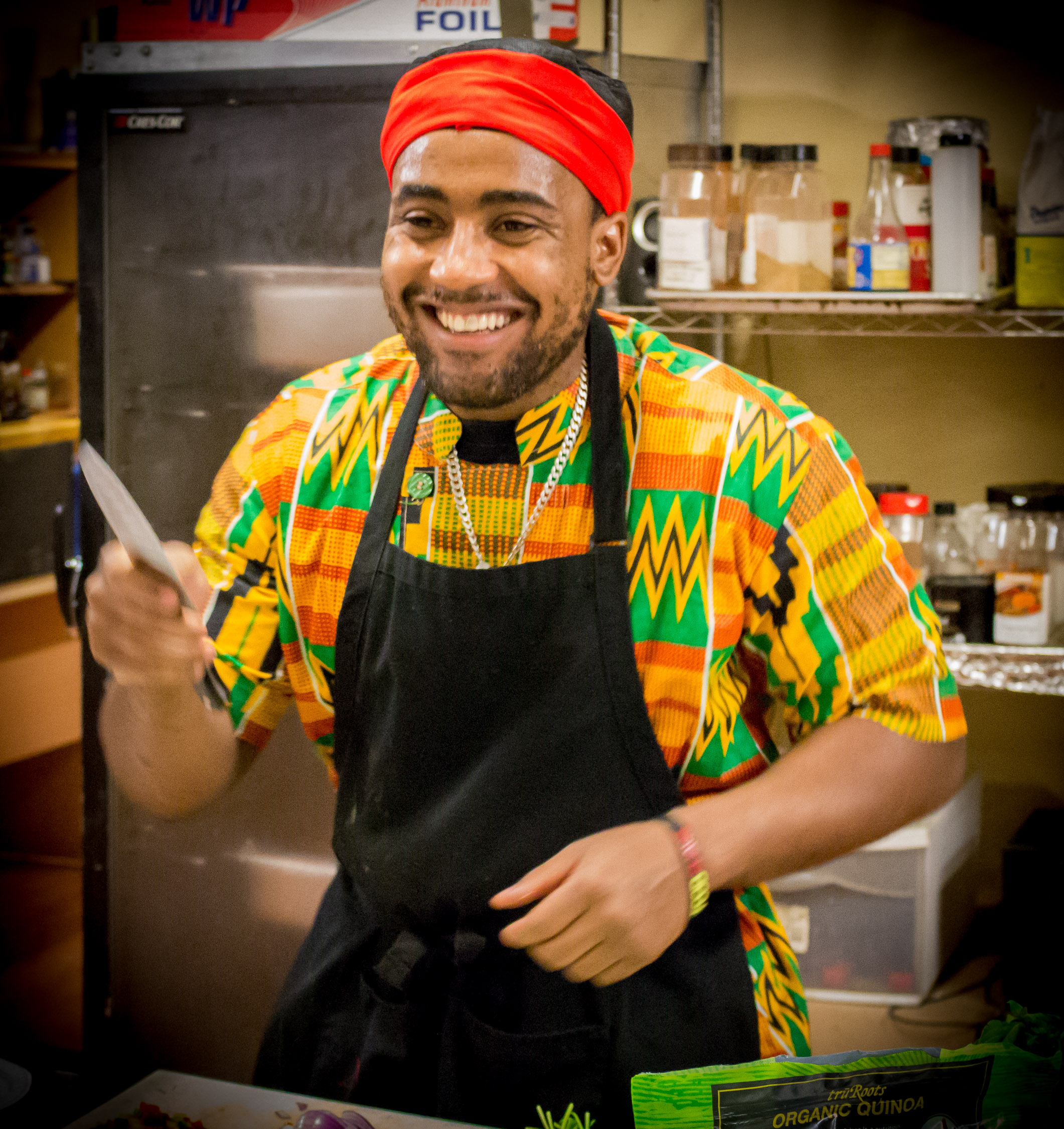 Oldways: Oldways is about heritage so let’s start with yours. What is your relationship to the African Diaspora? You mentioned you are Jamaican…

Chef Kriss Koﬃ: I was born in Miami, Florida, but raised in a Jamaican household and grew up going back and forth to Jamaica every year.

OW: When did your relationship with food start, and how? What’s your culinary background like?

CKK: At the age of 13 I started cooking, things like bully beef (corn beef) and rice when my mom had my little sister…then I started working at my dad’s Jamaican restaurant from age of 13 to 19. In my later years I was a dishwasher, worked the register, tables. From there joined the Army 2010, to 2016 and I was honorably discharged in August. My culinary background is still pretty young. I have only been cooking professionally since 2010. My professional cooking in the military is in a class of its own…I specialize in boat cooking and very hectic situations. I was requested to do the cooking for special missions. For example I cooked for 1,000 people with a team cooking on a ship in Afghanistan. I was in charge of developing recipes, clean up, etc…I was head chef living with 20 guys or so and was in charge of making sure everyone had highly nutritionally dense meals.

OW: How does African Heritage foods ﬁt into your lifestyle and culinary style?

Chef Kriss Koﬁ: When I ﬁrst started eating a plant-based diet, it wasn’t necessarily based oﬀ of African Diaspora food. It was mostly vegan junk food, fake meats, etc. I was still transitioning … March 2015 is when I went to Africa and while I was there, I was vegan. I just started to be creative and see the natural vegetation they had available which was the same as in Jamaica…I was eating a dish called Red Red (a Ghanaian dish of black eyed peas made with red palm oil and tomato paste), soursop, mango, banana chips — these are popular in Jamaica and in Ghana too…it all just came together for me. They do eat a lot of starch and carbs so it was hard to eat traditional foods but it inspired me and I hope to be a chef that “veganizes,” or make traditionally non-vegan meals vegan. 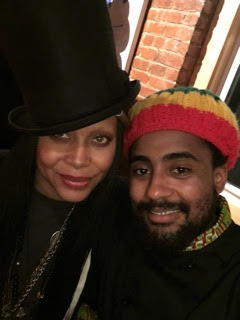 OW: What other Black chefs have you worked with and how were those experiences?

CKK: The ﬁrst chef I’ve worked with so far was Bryant Terry. He is the poster boy of my culinary school (Natural Gourmet Institute). He was the inspiration for me going to the school… I reached out to him and told him “I admire what you do, I have your cookbook…if you’re ever in New York I’m happy to help out.” A couple weeks after that he reached back out about an event he was doing in New York and asked me help. I didn’t event know it was for Erykah Badu until the last minute.This was a vegan dinner to wrap up the Soul Train Awards she was hosting. I hung out the whole day, helped cook, met Erykah…it was cool.

CKK: I want to travel to Africa as a personal chef for groups of folks who want to eat healthy while on their tours…I’m supposed to be the chef for travel to Africa through an organization called “A Way To Africa,” hopefully it all works out. I want to bring healthy eating into the diversity of African Diaspora food. I also want to kick oﬀ my personal chef business, “Dine 369.” I want to run a food truck in Miami for 6 months, which is already in the works. I want to travel doing pop-ups from city to city (ATL, NYC, DC) workshops and exposing plant-based techniques to generate money to do free workshops in Africa. 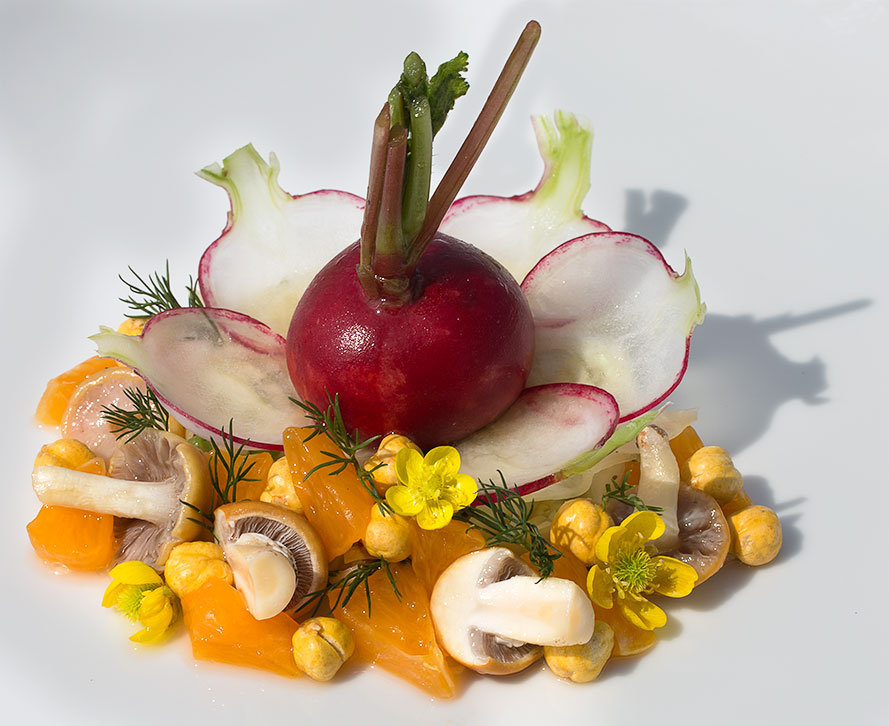 OW: Can you share any recommendations for how folks can incorporate more plant-based foods into their life, in honor of African Heritage and Health Week, Feb 1-7?

CKK: An economically way to increase the percentage of plants on your plate is to have half of the plate plant-based since right now most of it for people is meat… the other 25% protein, 25% starch.

1) Create small herb garden in your kitchen or in your yard.

2) Build a relationship with local farmers and farmers markets.

3) Eat less processed foods, eat whole foods. We are so additcted to sugar, salt, and starch on a cellular level.

4) Having a juicer and a blender helps … You can mask the taste of healthy foods because if you blend things like kale with things like agave and some nuts you wouldn’t even know the kale is in there.

5) Mind control is the number one way to change … You have to fully agree to yourself that you are going to incorporate more plant-based foods into your lifestyle.

Be sure to ﬁnd Chef Kriss Koﬁ on Instagram (@mekmuv_chefmuv or search ”Chef Kriss Koﬁ”). His website is coming, but for now, feel free to contact him via email (chefkrisskoﬁ@gmail.com).