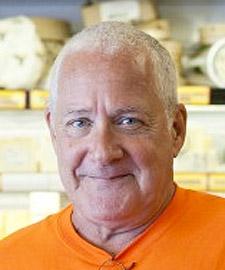 Variously described in print as “New York’s highest-proﬁle grocer” (New York Magazine), “the enfant terrible of the fancy food business” (The New York Times), and “the eminence grise of American cheesemongers” (The New Yorker), as well as having been featured in New York Magazine’s “The 100 Smartest New Yorkers” issue, Steven Jenkins has worked at New York’s Fairway Markets for most of his career. He was the ﬁrst American inducted into France’s ancient and elite Guilde du Maitre-Fromagers de St. Uguzon, in 1976, and was only recently elevated to “prud’homme”, the guild’s highest award. In 1980 he was welcomed into France’s super-honorary society, Taste-Fromage, once again, the ﬁrst American.

Jenkins’ ﬁrst book, Cheese Primer (Workman, 1996), decidedly a “chef-d’oeuvre” (eight years in the making; starred, boxed review in Publisher’s Weekly), is already in its record-breaking tenth printing. Cheese Primer won the James Beard Award and was nominated for the Julia Child Award of the International Association of Culinary Professionals. Cheese Primer is regarded as the single-most indispensable book in the world of cheese for both professionals and amateurs. Jenkins has written extensively for every major food and wine publication, including Gourmet, Food & Wine, Sante and Food Arts, as well as columns for the major trade magazines and domestic and international culinary journals. Jenkins is credited with having introduced countless cheeses and foodstuﬀs to New Yorkers (and subsequently the rest of the United States), and continues to generate remarkable publicity and public awareness for food artisans and artisanal foods (it was he who popularized the use of the terms “artisan/artisanal” as well as “cheesemonger”). He was recently named one of the 25 most important people in the history of the American specialty foods industry by Gourmet Retailer in their 25th-year anniversary issue.

Steven is a frequent guest lecturer at numerous venues here and in Europe (The National Geographic Society, The University of Pennsylvania, The Rhode Island School of Design, The Smithsonian, The 92nd Street Y, The Aspen Food & Wine Classic, The Fairway Masterclass Series); he is also in demand as a judge at various competitions and culinary schools (The American Cheese Society, The French Culinary Institute), and made frequent appearances on television (PBS with Jacques Pepin and Julia Child; a featured segment on CBS’s Sunday Morning with Charles Collingwood (Martha Teichnor reporting). He is a regular guest on the award-winning NPR program The Splendid Table with Lynn Rossetto Kasper. Jenkins was a board member of The American Cheese Society and is an active participant in the important work of the Oldways (Cambridge, Massachusetts). His many responsibilities at the highly regarded Fairway Markets (New York City) include the pioneering (exclusive) importation of traditional foods from over a hundred European companies. Jenkins lives in New York City with his wife Michelle and their children, Max and Lily.