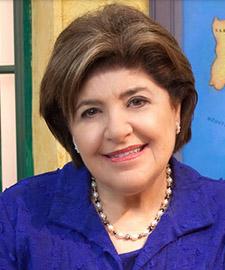 Mary Ann is the creator and host of the nationally televised PBS series, Ciao Italia with Mary Ann Esposito™. The series celebrated its milestone 20th season in 2010, making it the longest running cooking series on television. Growing up in Depew, New York, Mary Ann was steeped in the artistry of Italian cooking. Both nonnas, one Sicilian and one Neapolitan, were Italian natives and professional cooks, so life inside the Saporito household was decidedly Italian, no matter what was going on outside their front door in Western New York. A pivotal trip to Italy made her realize that what she was learning in cooking classes abroad she innately knew from her all-Italian, all-the-time upbringing. She pondered the “what ifs” of hosting a cable program that would teach the cooking lessons she learned as a child. The result was Ciao Italia with Mary Ann Esposito™. And today, 20 years later, Mary Ann has been recognized by countless organizations for her eﬀorts to preserve the traditions surrounding Italian food and culture, and has become the doyenne of PBS. Mary Ann’s television experience spans beyond PBS: she has appeared on the TODAY show, Regis and Kelly, Martha Stewart Radio, QVC, the Food Network, the Discovery Channel, FOX, Pax, RAI International (Italian television), The Victory Garden, Simply Ming, and a host of others. She has been a guest on Sirius Radio’s Morning Living on the Martha Stewart channel; and she has appeared beside chefs Todd English, Daisy Martinez, Sara Moulton, Jacques Pepin, Martin Yan, and countless others. Mary Ann holds a master’s degree in food history from the University of New Hampshire. Mary Ann has studied and taught in numerous cooking schools throughout Italy. She received Johnson and Wales University’s Distinguished Author Award, and she is a regular contributor to Boston University’s School of Lifelong Learning program, as well as a Board Member of Cordon Bleu, Atlantic Culinary Academy, and a member of Les Dames d’Escoﬃer. In 2006 she was granted an honorary doctorate from St. Anselm College for her dedication to teaching and preserving authentic Italian cuisine. In addition to producing Ciao Italia and making nationwide appearances, Mary Ann has written 11 cookbooks. Ciao Italia Five Ingredient Favorites (St. Martin’s Press) — hit bookstores in September 2009. Learn more about Mary Ann Esposito.