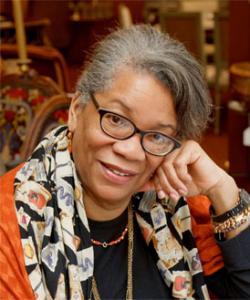 Educator and culinary historian Jessica Harris is the author of twelve cookbooks documenting the foods and foodways of the African Diaspora. Her most recent book is High on the Hog: A Culinary Journey from Africa to America. She has written extensively about the culture of Africa in the Americas, lectured widely, and made numerous television appearances.

Jessica holds a Ph.D. from NYU and is an English professor at Queens College, CUNY. She consults at Dillard University in New Orleans, where she founded the Institute for the Study of Culinary Cultures. Harris is a founding member of the Southern Foodways Alliance, and a member of the IACP and Les Dames d’Escoﬃer. Her articles have appeared in Eating Well, Food & Wine, Essence, and The New Yorker, among other publications, and she has been proﬁled in The New York Times. Harris has spoken about the food of African Americans on The Today Show, and Good Morning America, and at the Museum of Natural History, and has been a frequent guest at Philadelphia’s The Book and the Cook. In 2004, Harris was awarded the Jack Daniel’s Lifetime Achievement Award. She was also recently inducted into the James Beard Foundation’s prestigious Who’s Who of Food and Beverage in America. To learn more about Jessica, go to www.africooks.com.