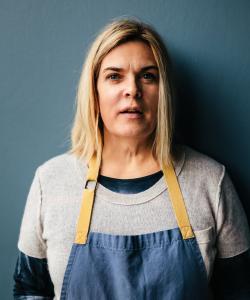 Ana Sortun is a native of Seattle, Washington and graduated from La Varenne Ecole de Cuisine de Paris in 1989.  She opened her ﬁrst restaurant, Oleana, in 2001 and was named Best Chef in the Northeast by the James Beard Foundation in 2005.  That same year she gave birth to her daughter Siena and wrote her ﬁrst cookbook, Spice: Flavors of the Eastern Mediterranean.  In 2010, she opened Sofra Bakery and Café with business partner and Pastry Chef, Maura Kilpatrick and several years later they co-authored Soframiz: Vibrant Middle Eastern Recipes from Sofra Bakery.  In 2013, Sortun partnered with Chef Cassie Piuma to open Sarma in Somerville, modeled after a Turkish meyhane or meze restaurant. Ana is a James Beard Semi-Finalist for Outstanding Chef in 2015, 2016, 2017, 2019 and 2020. She is known for bringing Middle Eastern ﬂavors into the mainstream through her passion of Turkish cooking, spices and her husband’s (Chris Kurth of Siena Farms) fresh, organic vegetables.

Fun Fact—Oleana is Ana’s full/real name.  Ana is a nick name. Oleana is an old-fashioned Norwegian name that has nothing to do with Turkish food or the Mediterranean but it’s also a song and a story about a utopia or promised land!!