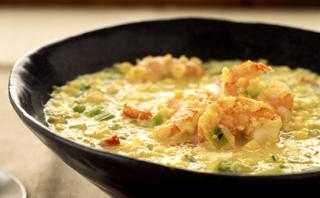 This thick soup is hearty enough to serve as an entrée, accompanied by a tossed salad and perhaps a bowl of popcorn—a standard soup garnish used by Ecuadorians that delights children of all ages. 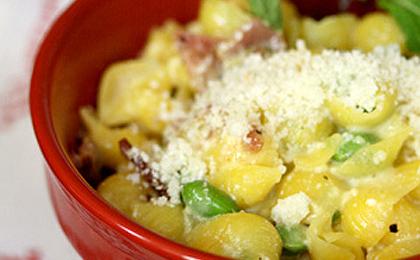 Carbonara is traditionally made by tossing the pasta in bacon grease and heavy cream. By making this dish with turkey bacon, fat-free yogurt, and half-and-half, you still get those great carbonara ﬂavors—my husband’s favorite—without tons of saturated fat.

Lillian Abugoch James of the University of Chile reported on the composition, chemistry, nutritional and functional properties of quinoa. She cited the pseudocereal’s “remarkable nutritional qualities” including its high protein content (15%), “great amino acid balance,” and “notable Vitamin E content.” Beyond its nutritional proﬁle, Abugoch recommends quinoa to food manufacturers because of its useful functional properties, such as viscosity and freeze stability.
Advances in Food and Nutrition Research, October 2009; 58:1-31

Scientists at the Universidade de São Paulo in Brazil studied ten traditional Peruvian grains and legumes for their potential in managing the early stages of Type 2 diabetes. They found that quinoa was especially rich in an antioxidant called quercetin and that quinoa had the highest overall antioxidant activity (86%) of all ten foods studied. Coming in a close second in antioxidant activity was quinoa’s cousin, kañiwa. This in vitro study led the researchers to conclude that quinoa, kañiwa, and other traditional crops from the Peruvian Andes have potential in developing eﬀective dietary strategies for managing type 2 diabetes and associated hypertension.
Journal of Medicinal Food, August 2009; 12 (4):704-13.

Researchers in Peru studied kañiwa, a native Andean pseudo-cereal that is a cousin of quinoa, to determine its potential to contribute to health. They found that kañiwa is rich in total dietary ﬁber and lignins, with high antioxidant activity. Moreover, they found that kañiwa had good functional properties, making it attractive for food processing.
Plant Foods for Human Nutrition, June 2009; 64(2):94-101. (Repo-Carrasco-Valencia et al.) 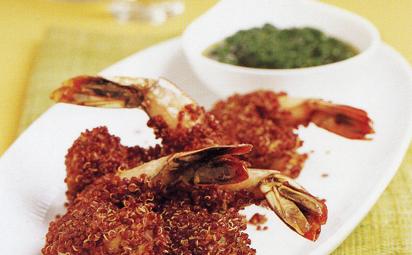 Chicharrones are a popular fried snack in Peru, and some chefs there are serving them with quinoa in the coating. This is a lighter version, using the technique of oven-frying to keep the coating from soaking up oil. I used red quinoa for a dramatic look, but regular quinoa will work just as... 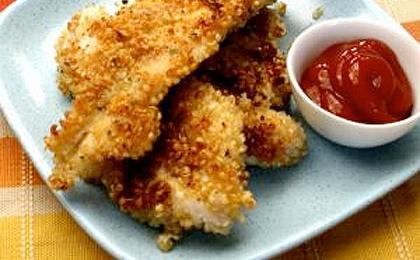 Chicken ﬁngers are always a huge hit with kids. Grown-ups will love these too because the quinoa coating provides extra nutrition and crunch. 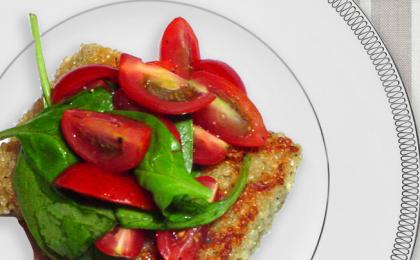 These crispy cakes make a delicious side dish– or top with quartered grape tomatoes and salad greens tossed in your favorite vinaigrette (as shown) for a an elegant appetizer or even a light meal. Vegetable broth may be substituted for chicken broth.

A University of Milan study compared buckwheat, oats, and, quinoa to see if any of them showed promise in helping with appetite control.  In three experiments – one for each grain – subjects’ satisfaction and subsequent calorie consumption were compared, after eating the study grain and after eating wheat or rice. All three study grains had a higher Satiating Eﬃciency Index (SEI) than wheat or rice; white bread was in fact lowest in appetite satisfaction. Unfortunately, even after feeling fuller from eating the study grains, the subjects did not cut their calories at the next meal!
British Journal of Nutrition, November 2005; 94 (5):850-8.

At the University of Milan, researchers compared the digestibility of various gluten-free foods in the lab (in vitro) and then with a group of healthy volunteers (in vivo). Their goal was to gauge the eﬀect of the diﬀerent foods on postprandial glucose and insulin response, as well as to measure triglycerides and free fatty acids after eating.  Quinoa stood out in the study, for producing lower free fatty acid levels and triglyceride concentrations than other GF pastas and breads studied.
European Journal of Nutrition, August 2004; 43 (4):198-204. Epub 2004 Jan 6.