Training For My First 5K 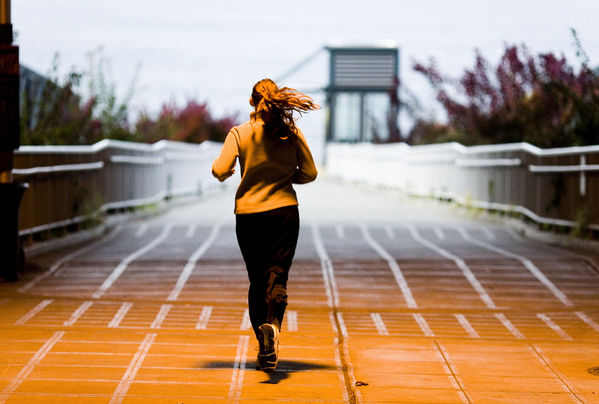 I am not a runner. There, I said it. I feel like ﬁtness maniac Jillian Michaels is going to descend from the sky via helicopter to scream in my face for typing that out, but it’s true.

One day, when I was in middle school (also known as the “pleasantly plump” years) I was late for the bus. I was slowly making my way up a steep hill when I saw that the bus was already there. The driver Ron was looking at me like I was a bug that had been smushed on his windshield. I decided to make a run for it. Most of the older kids in school were evilly watching me huﬀ and puﬀ towards them, their faces pressed up against the windows, thirsty for blood. I remember ﬁnally climbing up the stairs, breathing heavily with my face the shade of a tomato when someone yelled, “Oh my god, she looks like she’s going to have a heart attack.” I probably was, but I didn’t know it was that obvious. The damage was done, and for years after that, whenever I thought about running, I would hear that nasty nasally voice echo in my head.

Though I have always had a distaste for running, I love to be active. I play volleyball, take dance class, and workout whenever I can. Up until a few months ago, I had even been known to go for a 30-minute jog on the treadmill now and then. But I never thought about becoming a “runner,” peeking into that world of “Hey bro, what’s your usual time during high intensity runs?” or “Wow, I need an energy bar! Those last ﬁve miles were killer!” I just didn’t think that world was for me.

Did you know that the updated Mediterranean Diet Pyramid features daily exercise on the bottom of the pyramid, making it a large part of the Mediterranean lifestyle? Exercise can include: walking, house cleaning, running, soccer, tennis, golf, swimming, hiking, scuba diving, basketball, baseball, football, skiing, surﬁng, yard work, rollerblading, dancing, weight lifting, etc. Studies show: “the importance of the consumption of a dietary pattern “close” to the Mediterranean diet and the adoption of even light-to-moderate physical activity to reduce the prevalence of the metabolic syndrome at the population level.” (via)

One night in July, I was trying to think of ways to push myself more in the gym when I saw a new message pop up in my inbox: BIG DOG 5K – Sign Up Early! The Big Dog 5K is put on by my alma mater, Northeastern University. It’s a chance for alumni and current students to do something fun together. I signed up right then and there without a second thought, promising myself that I would train my butt oﬀ until I could run the 3.1 miles with style and grace to spare. I love a challenge.

My ﬁrst day of training was hilarious (and by hilarious, I mean terrible). I woke up at 6 AM, a time I never enjoy seeing, and decided to run a mile. You know, just to warm up. Piece of cake. This is when I learned a very valuable lesson: Running on a treadmill is NOT like running outside. They are two completely diﬀerent animals. Think you’re all big and bad on the treadmill, smiling as you sprint in your hot pink spandex with matching pink iPod? Go for a run outside, and prepare to have your dreams destroyed.

I barely made it through the mile without dry-heaving into my neighbor’s bushes. It was truly eye-opening, a harsh reminder that in the running world I was an amateur, and whatever ﬁtness level I thought I was at didn’t mean squat now.

The best advice I got during my two months of training was, “If you want to run faster, run. If you want to run better, RUN.” So that’s what I did, ﬁve times a week. I forced myself to become a morning person, running alongside the morning school buses, wanting to yell “How do you like me now?” Sometimes I’d have to run after work, staying at the gym so late that I would be the only one in the locker room around 9 pm. Soon I could run a mile consistently. Then two miles. Then almost three. I went through a pair of sneakers, suﬀered a knee injury, and on more than one occasion almost threw up in public.

All of this was done to achieve one thing: run the entire 5K. No walking. No stopping.

To ﬁnd out if all of my training was worth it, check back tomorrow to ﬁnd out how I did on race day!