The Thanksgiving Story You Learned in School is Probably Wrong

You were probably in ﬁrst grade, or maybe Kindergarten, when you made a tall black hat or a prim white bonnet out of construction paper and re-enacted “the ﬁrst Thanksgiving.” Your teacher told you that the Pilgrims in Plymouth Colony celebrated surviving their ﬁrst year by putting on a big feast, and inviting all their Indian friends to join in. And wham, every year since the 1620s, America has celebrated Thanksgiving on the fourth Thursday in November. 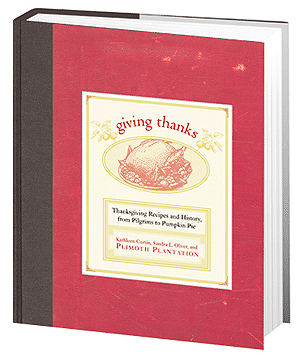 Not so fast. As with most stories, the truth is not that simple — yet at the same time, much more interesting, as Kathleen Curtin tells us in her book Giving Thanks: Thanksgiving Recipes and History. Recently I had the pleasure of hearing Curtin, who served for 20 years as Director of Colonial Foodways at Plimoth Plantation, share the real history of Thanksgiving at the 1750 Jeﬀords Tavern in York, Maine.

“It’s a hard holiday to pin down,” says Curtin. There was indeed a three-day harvest feast held in Plymoth in 1621, similar to harvest feasts held in most agrarian communities around the world from time immemorial. But this lively outdoor feast would not have been referred to as “Thanksgiving,” a word the Puritans reserved for a day of prayer, sitting on hard benches in a cold meetinghouse.

Beginning in Old England, “special days of thanksgiving” had been occasionally declared by government when the country was delivered from some peril or another. The Puritans — who rejected religious holidays like Easter and Christmas and called mince pie “idolatry in a crust” — had as their only holidays the weekly Sabbath and “days of Thanksgiving [for good things] and Humiliation [to atone for bad things].”

At ﬁrst these holy days/holidays were randomly celebrated by individual parishes, but after a time, many communities observed a Fast Day in the spring and a day of Thanksgiving in the fall, sometimes coinciding with a communal meal. Our ﬁrst National Day of Thanksgiving was declared by George Washington after the Battle of Saratoga in December 1777; it was followed by sporadic National Thanksgiving Days until around 1815, when someone decided that presidents had no authority to declare a religious holiday in a country where church and state are separate. 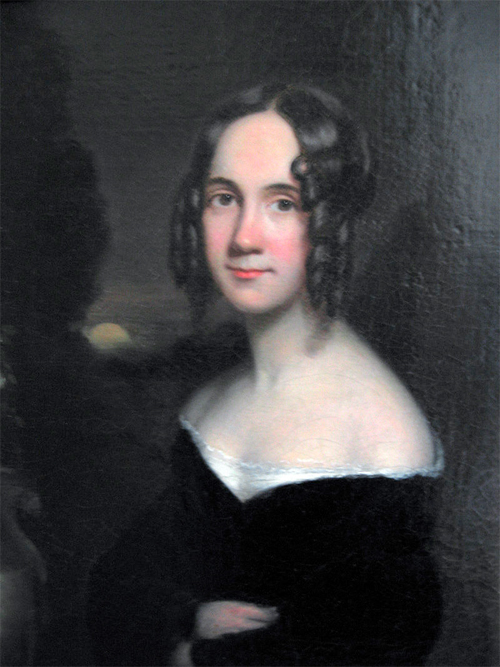 Sarah Josepha Hale, a “one woman cheering squad” for Thanksgiving.

That’s where the ﬁrst chapter of the Thanksgiving story dead-ends, as a Puritan religious holiday peters out. To pick up the story again — and to get to the part with the good food — we need to meet the woman Kathleen Curtin describes as a “one-woman cheering squad” for Thanksgiving: Sarah Josepha Hale, sometimes referred to as the “Godmother of Thanksgiving. (She’s also the author of the poem “Mary had a Little Lamb,” but since lamb isn’t often served at Thanksgiving, that’s another story.)

In 1822 at age 34, Hale had been left a widow with ﬁve children to support. She became a writer, and in her ﬁrst novel, Northwood, published in 1827, described a family celebrating a day of Thanksgiving with “roasted turkey … at the head of the table … sending forth rich odor of its savory stuﬃng … bowls of gravy and plates of vegetables … [and] the celebrated pumpkin pie, an indispensable part of a good and true Yankee Thanksgiving.” Eight years later, Hale published a book of short stories, including one called “The Thanksgiving of the Heart” in which she refers to “… our annual festival, the Thanksgiving. The funeral-faced month of November is thus made to wear a garland of joy.” Hale had grown up in New Hampshire enjoying an annual harvest feast, and wanted to spread the concept to all Americans.

By 1837, Sarah Josepha Hale had became editor of Godey’s Lady’s Book, perhaps the most widely read magazine of the century. She took advantage of her Bully Pulpit to promote family life in general, and national celebration of Thanksgiving in particular. The idea caught on in many northern states, where the history of harvest festivals was well established, and spread to the west as settlers migrated from states observing Thanksgiving. But the holiday was still celebrated randomly, on diﬀerent days.

Hale’s campaign for a universal Thanksgiving included “writing to everyone” and by the time of the Civil War, that included badgering Abraham Lincoln (as if he didn’t already have enough on his plate). Her message, paraphrased by Curtin, was that “what the country needs to heal, is a nice turkey dinner” with all of us “sharing a meal in concert with the whole nation.” Lincoln responded by declaring a Day of Thanksgiving in the tradition of days of prayer — and Hale responded with the equivalent of “Thanks, but let’s do it right, with a feast” recounts Curtin. And so Lincoln proclaimed the ﬁnal Thursday in November to be Thanksgiving.

The original Plimoth feast was, at that time, never tied to the Thanksgiving tradition. Relations with Native Americans were at an all-time low, so no one was interested in honoring the memory of sharing a meal with Indians. The Pilgrims didn’t reappear until late in the 19th century, when the Colonial Revival invited them back to the table. 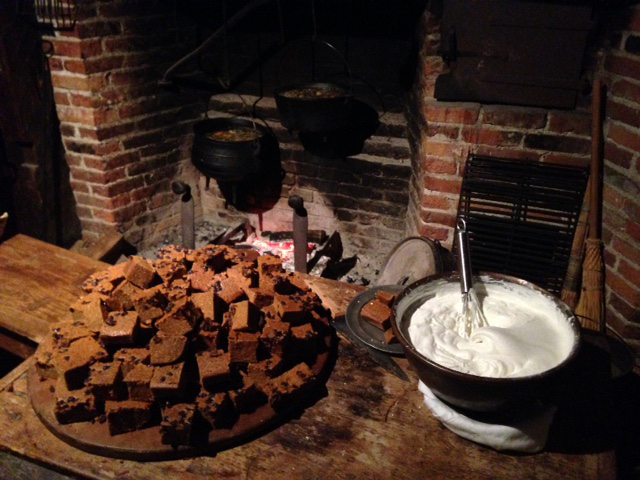 As the story comes to an end, we learn that it was Franklin Delano Roosevelt who moved Thanksgiving from Lincoln’s last-Thursday slot to the fourth Thursday in November, in response to merchants upset by a late Thanksgiving in 1939 delaying Christmas shopping. And it was Italian immigrants working at Macy’s who pressed their employer to add a parade like those they had long enjoyed on feast days back home.

In summing up her talk, Kathleen Curtin reﬂects on how a fundamentalist Protestant holiday evolved into an ecumenical one; how a northern tradition went from being decried in the South as a Yankee abomination to being celebrated in all 50 states; how, in short, Thanksgiving has become “something at the heart of who we are” as Americans.

What would a talk about Thanksgiving be without food? When all was said and done, we sat down in the candle-lit tavern at communal tables by an open hearth, to share turkey soup, cornbread, and gingerbread with whipped cream for dessert.

Janet
"bully pulpit" Really? Sarah doesn't sound like any kind of Bully to me.
Cynthia
I agree -- she sounds like someone I would have enjoyed sitting down to dinner with! According to the "Oxford English Dictionary," bully pulpit means "a public office or position of authority that provides its occupant with an outstanding opportunity to speak out on any issue." Theodore Roosevelt invented this expression when he called the White House a "bully pulpit" because it provided him such a good way to get attention for his agenda. ("Bully" used to mean "superb" or "wonderful" a century ago; although that overall use has become rare, the term "bully pulpit" is still in use.)