Finally summer has arrived, after weeks of cool, damp weather. I was still making soups two weeks ago, but now I’m thick into my favorite summer salads. Trading the salad recipes for the soups is a lot like bringing out those old familiar t-shirts and shorts, after months of turtlenecks and sweaters. Tonight for dinner we had Thai Shrimp Noodle Salad – inspired, perhaps, by Dun and Sara’s yummy pictures from Thailand a few weeks ago. Here’s how it’s made: Sauce Ingredients:

Everything else: Bring a big pot of water to a boil, then add your pasta, so it can cook while you make the sauce and chop the veggies. I usually use Barilla Plus pasta for this, because it’s lots healthier than reﬁned pasta but it has a neutral taste. While the pasta is boiling for about 8 minutes, make the sauce, in your biggest bowl. I use my big wooden salad bowl.  I’m sure you know what canola oil, sugar and lime look like, but the other sauce ingredients might be worth a peek and a few words of explanation. I use minced ginger and minced garlic from a jar. That horriﬁes some people, and I admit that the ﬂavor isn’t the equal of chopping either one fresh. But it’s very close, in my mind, and it’s quick and you don’t wear the smell of garlic or ginger on your hands for the next day when you take this route. Now. About Nam Pla. Sometimes known as Thailand’s substitute for soy sauce, it’s made of anchovies, fermented and then strained. Sounds awful.  Smells awful.  Don’t sniﬀ it straight from the bottle. Just trust it, ‘cause somehow it makes Thai and Vietnamese dishes taste just right. You should be able to buy this at most groceries – the little bottle shown here came from my mainstream grocery store, while the large one came from the Asian market near me.  You only use a little, and it lasts forever, so it won’t be wasted. Juice the lime into the bowl, add the nam pla, sugar, oil, ginger and garlic, and mix thoroughly. Then start chopping the vegetables and add them to the sauce. Here’s what the sauce looks like, with the green onions and the grated carrots added to it. 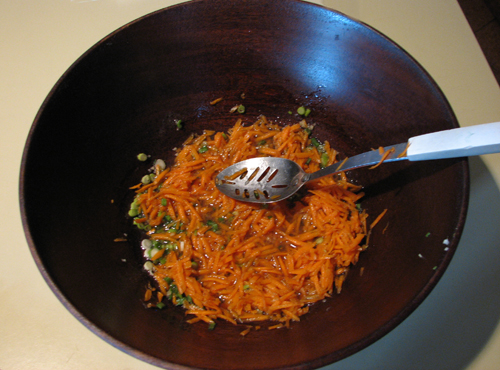 Next come the cilantro and the lettuce – I used napa cabbage instead of lettuce this time, as it looked so beautiful at Farmers’ Market last Saturday. Napa cabbage is a very mild cabbage, with the advantage of staying crisp longer than the red leaf lettuce I had in my fridge. 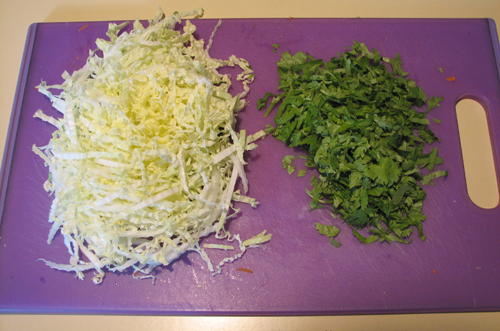 While all this chopping has been going on, I’ve been thawing some frozen cooked shrimp in a bowl of water, and my sous-chef (okay, my husband) has pinched oﬀ their little tails. Now he’s chopping the peanuts while I drain the noodles. 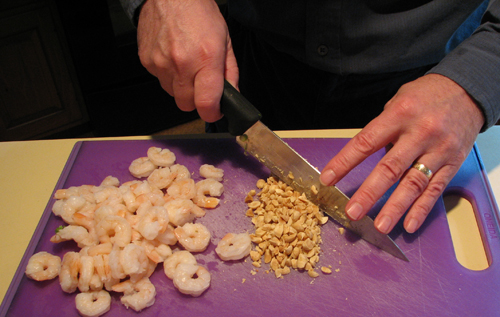 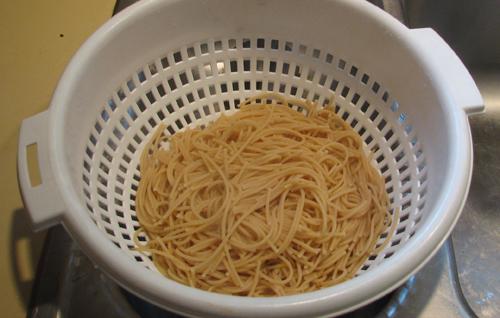 Finally, we toss everything but the peanuts together in the big bowl, serve, then sprinkle with the chopped peanuts. Mmmmmm. 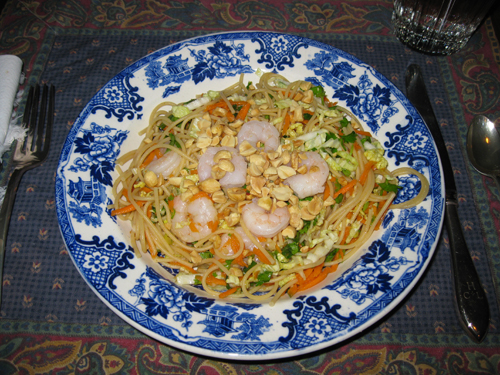