Stuﬀed vegetables have a long tradition in many Mediterranean countries. Greeks, Sicilians, Lebanese, Turks, Egyptians, and the Cypriots might argue that their version of a given stuﬀed vegetable dish is best and claim its origin as their own, but in reality, stuﬃng vegetables is a common preparation shared widely in the Mediterranean.

Dolmadakia, or stuﬀed grape leaves, is a classic dish in Greece. The Greek word dolmadakia is actually a direct form of the Turkish word dolma (or plural, dolmades), which means stuﬀed or ﬁlled. However, in Turkey, dolma often refers to vegetables, typically zucchini, eggplant, tomatoes, and bell peppers; whereas, sarma, meaning stuﬀed and rolled (wrapped), often refers to stuﬀed and rolled grape or cabbage leaves. In Greece, gemista (or yemista) are stuﬀed tomatoes and peppers ﬁlled with rice, and lots of fresh herbs, including mint. In Italy, stuﬀed tomatoes (pomodoro ripieni) are ﬁlled with rice, cheese, and plenty of fresh herbs and baked in the oven. As the tomatoes cook, their ﬂavor intensiﬁes and the rice packed inside absorbs all those scrumptious tomato juices. 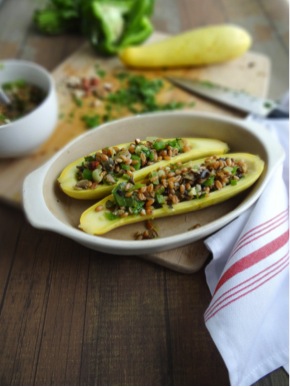 Mashi translates to stuﬀed in Arabic. In Egypt, anything that can be hollowed out is fair game for stuﬃng, for example, eggplant, zucchini, potatoes, peppers, grape leaves, and cabbage leaves. Each serves a popular vessel to be ﬁlled with a traditional rice, herb, tomato sauce, and spice mixture.

Piquillo pepers are a classic Spanish tapa, stuﬀed with anything from goat’s cheese to bonito (tuna) to salt cod pureé (bacalao).

From late spring to early fall, you’ll likely ﬁnd beautiful yellow/orange squash blossoms in your garden or at your local farmers’ market. The soft, delicate, mild tasting ﬂowers of summer and winter squash are the perfect vessel for stuﬃng. In Italy, a local delicacy consists of squash blossoms ﬁlled with ricotta cheese and herbs that are lightly battered and deep-fried until airy and crispy on the outside and oozing with warm cheese on the inside.

In addition, stuﬀed rolled eggplant (rollatini di melanzane) and stuﬀed artichokes are classic Italian antipasti (appetizers). The former consists of eggplant stuﬀed and rolled with mozzarella and basil, layered with tomato sauce, and baked in the oven. The latter, large globe artichokes, are traditionally stuﬀed with Parmesan, breadcrumbs, and herbs and baked in the oven until the artichoke leaves are tender. The stuﬀed artichokes are then ﬁnished brieﬂy under the broiler, which allows the top layer of cheese and breadcrumbs to get nice and crispy.

Stuﬀed dishes in the Mediterranean extend beyond vegetables. Given squid’s tubular shape, they make an ideal vehicle for stuﬃng. From Sicily to Spain to Turkey, you’ll ﬁnd various versions of stuﬀed squid. They are often ﬁlled with rice or bulgur, breadcrumbs, fresh herbs, and squid tentacles and simmered in tomato sauce or baked in the oven until tender and ﬂavorful. Aromatic, seasoned rice-stuﬀed mussels, midye dolma, is a classic regional Turkish dish and a common street food on the streets of Istanbul.

Porchetta or pork belly, stuﬀed with fresh herbs and spices (rosemary, thyme, fennel), and a good amount of garlic and slow-roasted until the fat renders out—the meat succulent and juicy, and its skin crispy—is a classic Italian preparation.

Of course, we can’t overlook desserts. Stuﬀed dates are a traditional Moroccan sweet served during Ramadan and special occasions. Orange blossom water and cinnamon are used to ﬂavor almond paste before it is stuﬀed into pitted dates. In Syria, Jordan, Lebanon, Israel, and Palestine, you’ll encounter mammoul, buttery, shortbread cookies stuﬀed with a date, walnut, or pistachio paste, which has been infused with rosewater or orange blossom water, pressed into decorative, wood-carved molds, baked in the oven, and ﬁnished with a dusting of powdered sugar.

With plenty of vegetables in season, September is the perfect time to perfect (or try for the ﬁrst time!) stuﬀed Mediterranean delights!

Jeanette
Love your recipes - thank you!
Lynn Pelletier
The entire content of this wonderful article made my mouth water. I now have to stuff everything! A recent trip to Spain and Italy taught me so much and now this. Perhaps do indeed need to spend 3 months in "the Med". Thank You..