In our April 28th blog, we promised you more pictures of meals from our recent Normandy culinaria trip. Three Norman favorites appeared again and again on our plates, so I thought it might be fun to share the many diﬀerent and imaginative ways we enjoyed these ingredients. Seafood. With 360 miles of coastline, Normandy inspires its chefs to be very creative with seafood. This assortment of simple fresh seafood from l’Auberge de la Baie in Ardevon, served with lemon, mayonnaise, and vinegar-shallot dipping sauces, showed the incredible variety of creatures available locally. Look closely and you can see shrimp, crayﬁsh, oysters, whelks, and several other varieties we’re not sure we can name in English or in French! 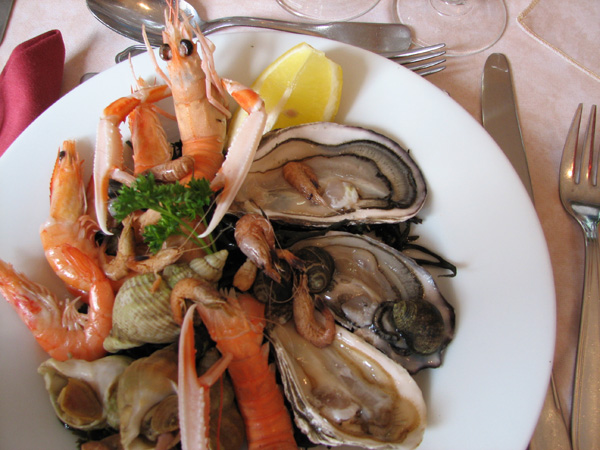 We enjoyed assorted shellﬁsh in a parsley-garlic-butter sauce followed by grilled hake (colin, in French) with scallops at La Crémaillère in Courseulles-sur-Mer…

… and squid risotto at Coline d’Enzo in Bayeux. 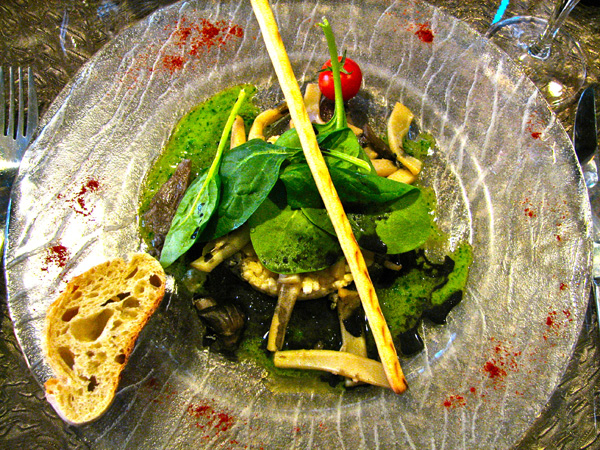 At the Auberge de la Source in Barneville-la-Bertran near Honﬂeur, Susan Herrmann Loomis, our cooking-goddess-in-residence for the week, told us how to spot a fresh mackerel, a ﬁsh chock-full of healthy omega-3 fats. After our Mackerel 101 class, this lovely inn served us mackerel in a mustard-leek-cream sauce.

Susan told us the French are utterly dependent on leeks for cooking. “I remember one time,” she recounted, “when there was a bad freeze that resulted in an almost-total shortage of leeks. All the newscasts were ﬁlled with serious reports, assuring everyone it was possible to cook without leeks, and oﬀering suggestions for how to do so.” Cheese and Cream. We learned to recognize the Norman breed of cows by their “sunglasses” – the dark circles around their eyes, and came to appreciate the rich milk they gave. Cream, cheese, and butter are hallmarks of cooking in Normandy – and yet somehow this region enjoys the same low rates of heart disease and stroke as other areas of France. Call it the Norman Paradox. The Big Three cheeses of Normandy are Camembert, Livarot, and Pont l’Evêque. Most meals are not considered complete without a cheese course including wedges of all three, like the one we showed in our April 28th blog. To change things up a bit, l’Auberge de la Source served us a crispy roasted Camembert salad as our cheese course. 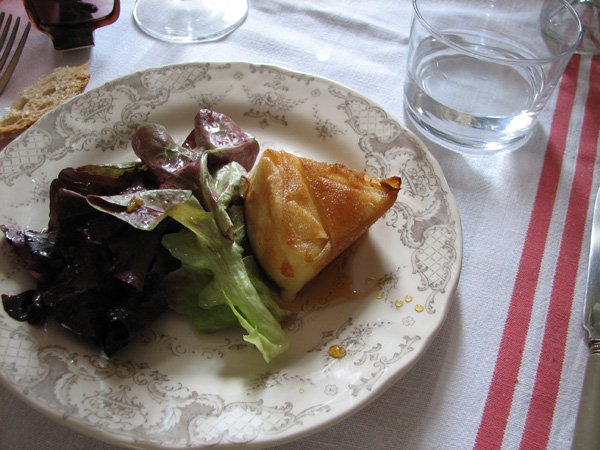 Coline d’Enzo in Bayeux got the prize for most surprising use of Camembert, with a warm Camembert soup served in a shot glass as part of our appetizer – Camembert through a straw!  (Of course you’re curious what the rest of this is: salad in a cup, ham on a bed of speculoos – a Belgian spice biscuit – crumbs and a cauliﬂower purée.) 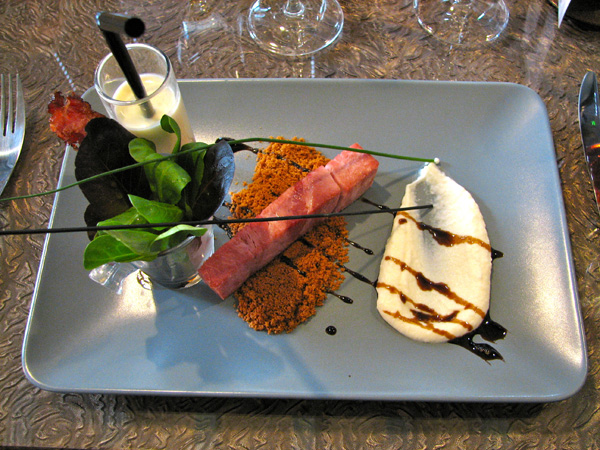 Cream sauces are usually made with crème fraîche as you can see in Susan’s Poulet Vallée d’Auge (left) and in the mushroom crèpes at a streetside café (right) – and of course on our tarte Tatin, pictured with the apple dishes below.

Apples. Everywhere throughout the Norman countryside the apple trees were in blossom, promising a new crop of apples even as last year’s harvest was still on the menu. Hardly a meal went by without apples in some form. At Auberge de la Baie, apples took the form of a caramelized apple puﬀ pastry. 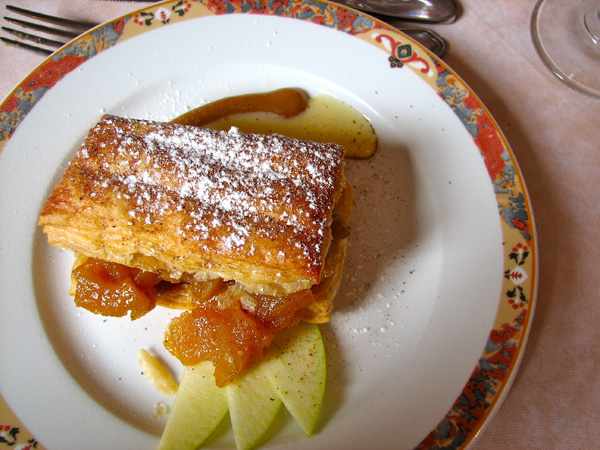 In contrast, Le Bréard in Honﬂeur oﬀered us the most complex presentation of apples, with this three-layer appetizer of duck foie gras, cooked apples, and Pommeau aspic – a gelatin made with Normandy’s apple sherry. 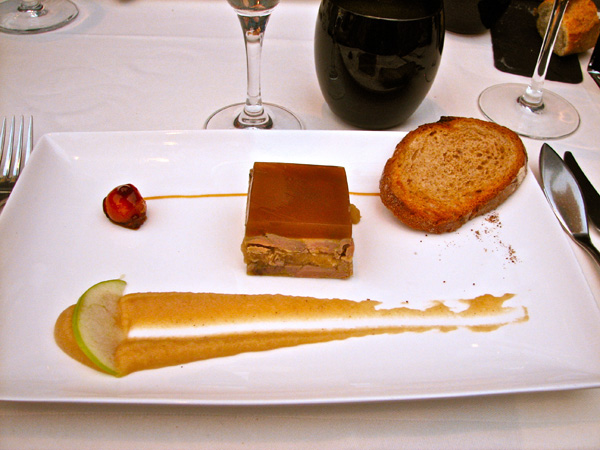 Also at Le Bréard, our dessert was “Apple Tatin-style” – caramelized apples on a shortbread cookie, with a shot of icy Calvados granité on the side. 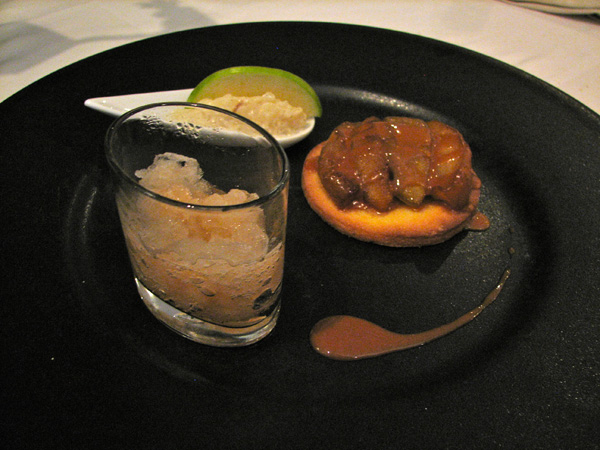 But none of these apple dishes could top Susan’s traditional tarte Tatin, made before our eyes at La Fringale in Bayeux and enjoyed with a smidgeon of crème fraîche. 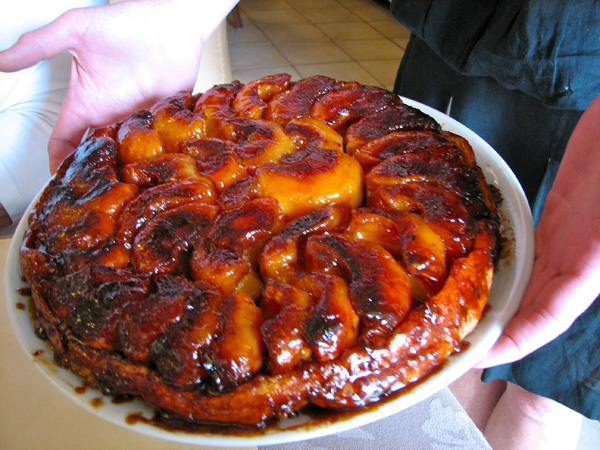 We also drank our apples, in the form of cider, Calvados, and Pommeau. All the better to raise a toast to the wonderful food of Normandy. 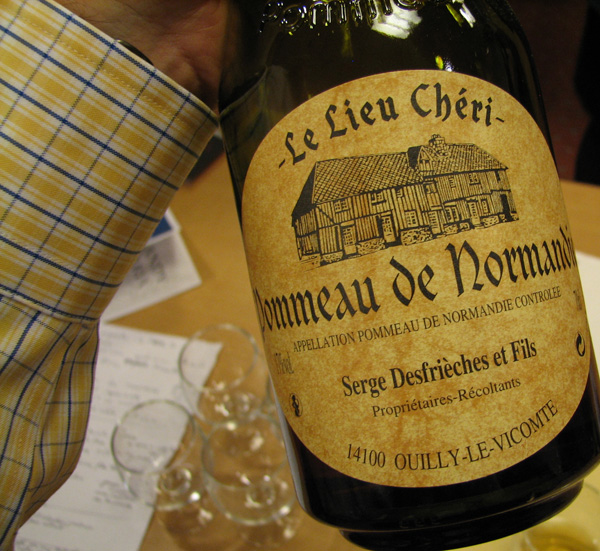