Q&A: A Conversation With A True Nutrition Hero

Named “Nutrition Hero of 2014” by Food and Nutrition Magazine, Tambra Raye Stevenson is fully living up to her name, helping to save lives and endangered food traditions around the globe. Tambra is an Oldways African Heritage Diet Advisory Member, a food justice advocate, nutrition educator, and founder of NativSol Kitchen, designed to help people embrace healthy, traditional cooking at home. Tambra was recently named National Geographic’s Traveler of the Year, for her sojourns to Africa for nutrition education work. 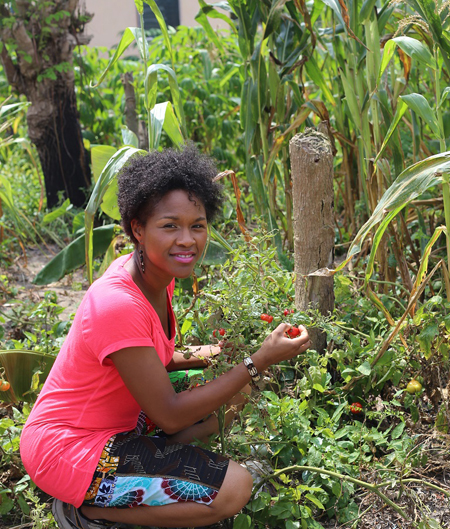 Named “Nutrition Hero of 2014” by Food and Nutrition Magazine, Tambra Raye Stevenson is fully living up to her name, helping to save lives and endangered food traditions around the globe.

Tambra has most recently returned from Ghana, Africa, where she was invited to lecture on nutrition at the University of Cape Coast’s Medical School. We got the chance to catch up with her about her trip.

OLDWAYS:  Thanks so much for talking with us today, Tambra. Welcome back! What an honor to be invited to present overseas. Can you tell us about your lecture to the medical students at the University of Cape Coast? What was your presentation on?
TAMBRA:  My presentation covered the rising epidemic of obesity around the world. Though the numbers are low in West Africa, heart disease is the #1 killer (39%) in Ghana. After heart disease, respiratory diseases are an issue in Ghana given the current air pollution and environmental standards. 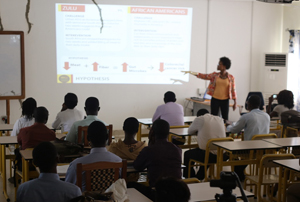 The role of Western lifestyle (more stress, less traditional foods, less community focused, and less spiritual) has an impact on our health.

I covered several studies showing the health beneﬁts of African traditional foods and highlighted one study where a group of Zulu members swapped diets with African Americans in Ohio, which showed the Zulu had an increased risk of colorectal cancer. And the African Americans decreased their cancer rate by having a Zulu diet composed of mostly complex carbohydrates and ﬁber and less meat.

I concluded that we [health professionals] should preserve cultural traditions like the African heritage diet, create empowering media messages, encourage more grassroots activism to promote a healthy Africa with good nutrition, upgrade nutrition and medical school curricula, and enhance current policies with a focus on balancing people, planet, and proﬁt.

Beyond the lecture, I learned that the developing academic programs in Ghana are ripe with opportunities for partnerships. I had a wonderful meeting with the Dean of the medical school to support their growing nutrition program. I had the chance to tour the hospital and medical school facilities and speak with the local nutritionists working in maternal and child health. And I am currently interviewing the President of the African Nutrition Society for an upcoming blog post for an international foundation to learn more about Africa and the state of nutrition and traditional foods.

Another great highlight was my visit to Kakum National Park, which includes a tropical rainforest and was created in 1931. Along the hike in the rainforest, the guide, an African female elder, shared healing beneﬁts of some of the tropical plants on the nature walk and how her family swore by certain plants that helped with their eyes and diabetes. It was fascinating to hear her and see the plants up close. That’s the power of African healing plants.

OLDWAYS:  Where does traditional eating stand in Ghana today? Are traditional foods and cuisines still enjoyed the majority of the time? Or have they been totally replaced?
TAMBRA:  Ghanaian traditional foods are a mainstay, especially with the price hike on Western foods like burgers, pizza and ice cream that are mainly found in expat areas. However, with the increased urban development, convenience, fast paced lifestyle, people seek quick, yet nutritious, food like Nestle’s Milo, which is a common beverage.

OLDWAYS:  How has the health of Ghanaians been eﬀected by the nutrition shift?
TAMBRA:  The wave of obesity has not yet penetrated the shores of Ghana like South Africa. However if the development picks up despite the Ebola crisis in the Western region, there will be a growing concern of non-communicable diseases. Currently heart disease grips the country’s population at 39%. Stores of traditional healers were readily visible to provide solutions for diabetes in Accra.

A published 2005 study in the Ghana Medical Journal reports in urban and rural Accra that the overall crude prevalence of overweight and obesity was 23.4% and 14.1% respectively among adults aged 25 years and above. The rates were higher in females than in men. Obesity increased with age up to 64 years. There were more overweight and obese in the urban high-class residents compared with the low class residents and in urban than in rural subjects. It was highest among the Akan and Ga tribes and relatively low among Ewes. Subjects with tertiary education had the highest prevalence of obesity compared with less literate and illiterate subjects. Subjects whose jobs were of a sedentary nature had higher levels of obesity.

OLDWAYS: Are there nutrition eﬀorts in place to help Africans revive and preserve their dietary and culinary traditions?
TAMBRA:  At the university-level nutrition programs in Ghana, they learn from Western nutrition science books. There is a distinct division between herbal medicine and the nutritional and medical training, which is similar in the States unfortunately. There are advocacy groups and events that take place to preserve the organic and whole foods in Ghana. However, it’s a story of David and Goliath, with the government and corporations working together in the name of smart agriculture, green revolution, and economic development. So, a more concerted eﬀort along with banded alliances and resources should support programs and initiatives to preserve African heritage foods and understand the nutritional value of the foods.

Ghana signed up for the Scaling Up Nutrition, a global initiative on food and nutrition, with 54 countries currently joining and several major partners like the Gates Foundation, World Bank, etc.

The goal is to increase government funding on nutrition, ratify the national nutrition policy, and engage families and communities on good nutrition and several other indicators. However there is no mention of preserving heritage foods. The Ghanaian president supports smart agriculture, which is code for GMOs and creating foods with additional levels of vitamin A, foods like the “Super Cassava” to ﬁght night blindness.

OLDWAYS: You also traveled to Ethiopia this year, on the other side of the Continent. Can you describe some of the major diﬀerences and similarities between Ethiopian and Ghanaian traditional foods?
TAMBRA:  In Ethiopian cooking, injera, which is eaten several times a day, is the common staple whole grain product used to scoop up spiced ground meats and lentils. In comparison to West Africa, starchy vegetables were not common in my food journey in Ethiopia. 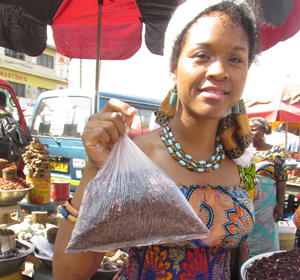 In Ghana, the grain of choice is corn to prepare kenkey or white rice to accompany a dish. However, many people opt for fufu made from yam, cassava and/or plantain to scoop soups made with palm oil, ﬁsh, and peppers. Eating by hand is part of the tradition on East and West coasts of Africa, which furthers this connection to the food and source.

Prepared street food was constantly available in Accra, Ghana, even more so than in Addis, Ethiopia. In Ghana, freshly prepared daily popcorn, peanuts, tiger nuts, and plantain chips carried on silver trays balanced on the heads of women and girls sold for a few Ghanaian cedis (currency).

For beverages, coﬀees and teas or freshly squeezed fruit juices are seen throughout Addis Ababa. While in Accra, drinks like sobolo (which are dried hibiscus ﬂowers) mixed with ginger and pineapple or portable bags of water are commonly found.

OLDWAYS:  To you, what are the most signiﬁcant impacts that eating traditionally can have—nutritionally, physically, emotionally, culturally, and spiritually?
TAMBRA:  The most signiﬁcant impact of eating and preparing foods traditionally is having a feeling of coming back home, which is the essence of NativSol Kitchen. For many African Americans who cannot connect to or identify their African roots, the simple act of preparing an African heritage meal can be a path to coming back home. In the 1920’s Marcus Garvey of United Negro Improvement Association leveraged his charisma of motivating disheartened African Americans after the War to come back to Africa.

For many African Americans repatriating was not possible. Through the power of transforming their meal, they can come back to Africa—their ancestral home. By doing so, they can incorporate African ingredients into everyday dishes while supporting local African businesses and restaurants. It speaks to self-determination, cultural restoration, and solidarity. Food can be that tool to reconnect, heal, and restore across the Atlantic divide. That’s my culinary response to the belated Garvey.

OLDWAYS:  What do you think are the biggest obstacles for West Africans to return to traditional ways of eating? What about for Americans? What are the diﬀerences?
TAMBRA:  The biggest obstacles are the cultural shift from African traditions to Western, with the impact of foreign investment, media, and role of colonialism. Those with little economic means will continue to eat African traditional foods. In the markets produce was readily available and aﬀordable.

But for those upwardly mobile Africans living the hustle bustled life, there are impeding challenges such as time and convenience. As studies have shown those Africans with education and higher economic status are more likely to consume more ready-to-eat meals and have more non-communicable diseases like diabetes, cancer, heart disease, hypertension, and kidney failure.

OLDWAYS:  What have you found to be the most helpful ways to get people more interested in reviving cultural culinary traditions?
TAMBRA:  The most helpful ways of getting people interested in reviving cultural culinary traditions is by speaking to their innate ancestral spirit that lies within them.  I talk about restoring lost tradition and values by coming together and reconnecting to loved ones and to food as a healing tool for connecting to our God within – the source of all things. It may not be realistic for everyday eating; however we can at least reclaim these rich cultural experiences for special occasions and holidays.

Nowadays, people go to the store to pick up meals to go even for holidays; no cooking on that special opportunity to take time and connect with family. I know it’s not easy or realistic for everyone; but for those who can, invite friends and estranged family and use food to create lasting memories and build bridges to love again. Because, ultimately, that is what we all want. Food is that bridge to connect us to our loved ones. That’s why we break bread together as a symbol in religion, culture, and business.

OLDWAYS:  You shared that you got to do some traditional Ghanaian cooking while there. What were some of the dishes that you prepared?
TAMBRA:  For an Afro-foodie’s dream, I got to prepare traditional fufu, fresh palm nut soup, and sobolo, to name a few dishes. Prior to coming to Ghana I 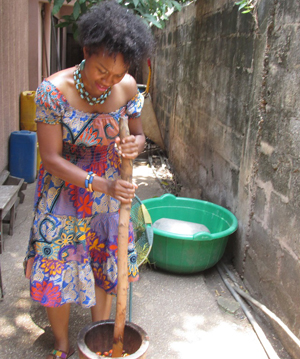 would see images in African cookbooks and museums of two women working together pounding ingredients with a stick. And it was a wonderful experience to work with another African sister preparing a dish to share later that day. It was the experience I speak about in my talks and classes about the traditional forms of cooking involved working, praying, and eating together. Food created community especially among women and children. And that has slowly eroded in the Western culture of individualism.

OLDWAYS:  Based on your travels, are there any interesting ingredients that you now keep in your kitchen that everyone should know about? Where can people ﬁnd these products here in the U.S.?
TAMBRA:  In my NativSol Kitchen, staple foods nestled in my cabinets and fridge include teﬀ, millet, palm nut, coconut oil, plantains, hibiscus, and berbere. These items can be found in African markets or health food stores.