Pulling Ancel Keys Out from Under the Bus

On January 13, 1961, Americans opened their mailboxes to see the bespectacled face of Ancel Keys on the cover of Time magazine – a spot usually reserved for politicians, ﬁlm stars, or top athletes. What on earth had a physiologist done to compete for that exalted space? 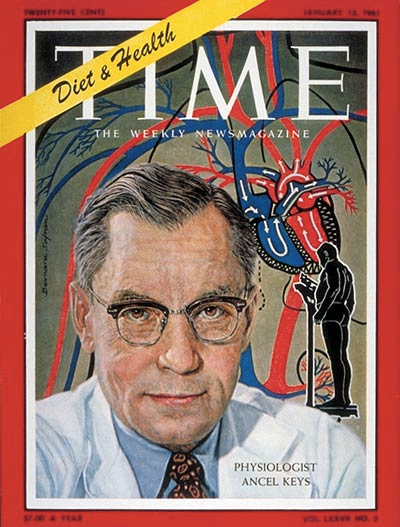 For starters, Keys was already known and respected for his role in developing the military meals – dubbed K-Rations in honor of Keys – that fed many GIs in World War II. Toward the end of that war, he carried out the Minnesota Starvation Experiment, to determine the best way to safely and gradually refeed starving refugees. Now, in peacetime, Time was highlighting Keys’ new mission: to ﬁgure out what was causing heart disease rates to skyrocket. Heart disease had in fact plummeted during the war, when certain foods were unavailable, so Keys suspected there was a relationship between diet and heart health.

(“Well, DUH,” we hear you saying. Of course what you eat aﬀects heart health, and health in general. The link may seem evident to us today, but 60 years ago it wasn’t a given.)

To learn more about the links between heart disease and health, Keys envisioned an enormous world-wide study, gathering data on foods eaten and on rates of heart disease in as many countries as possible. His eﬀorts, which became known as the Seven Countries Study, collected data on 12,763 men, with follow-ups at ﬁve, ten, and ﬁfteen years, and showed a strong correlation between saturated fat and heart disease.

Keys championed the Mediterranean Diet (high in unsaturated fats and full of legumes, whole grains, fruits, vegetables, and nuts) and, following his own dietary and lifestyle advice, spent much of his last three decades in the Italian region of Campania, south of Naples; he lived until just short of his 101st birthday. For decades, the Seven Countries Study was hailed as ground-breaking and cited as the foundation and inspiration for subsequent dietary research. 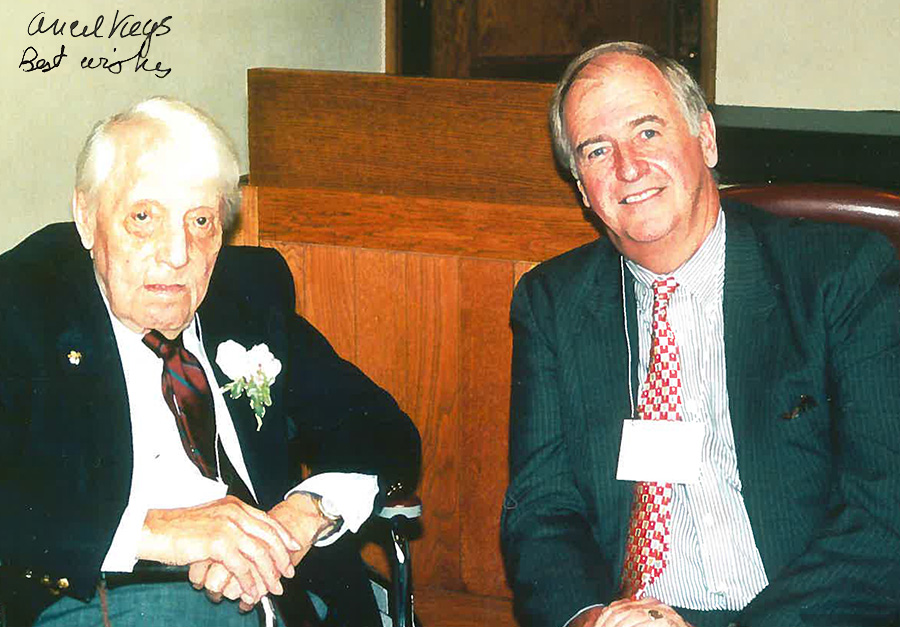 Ancel Keys (left) in the ﬁnal years of his life, with Oldways founder K. Dun Giﬀord

Fast forward to recent times, with headlines announcing “Butter is Back” (even if the evidence says otherwise, as we wrote in a recent blog). Ancel Keys has been thrown under the bus by a clamoring crowd who claim his work led to the low-fat diets that had Americans living on SnackWell’s, soda, and white bread. Nothing could be further from the truth; Keys promoted quality carbs, fats, and protein all around – long before this became fashionable.

Now a new White Paper from the True Health Initiative – published today – has come to Keys’ rescue with a strong, documented defense including these summary words:

Misadventures in low-fat eating, to say nothing of low-fat junk foods, cannot legitimately be attributed to any position espoused by Keys over the course of his career. … There is more than one way to eat badly, and if the American public has been committed to exploring them sequentially, blame for it cannot be laid at the door – or now the grave – of Ancel Keys.

How Do I Rebut Thee? Let Me Count the Ways 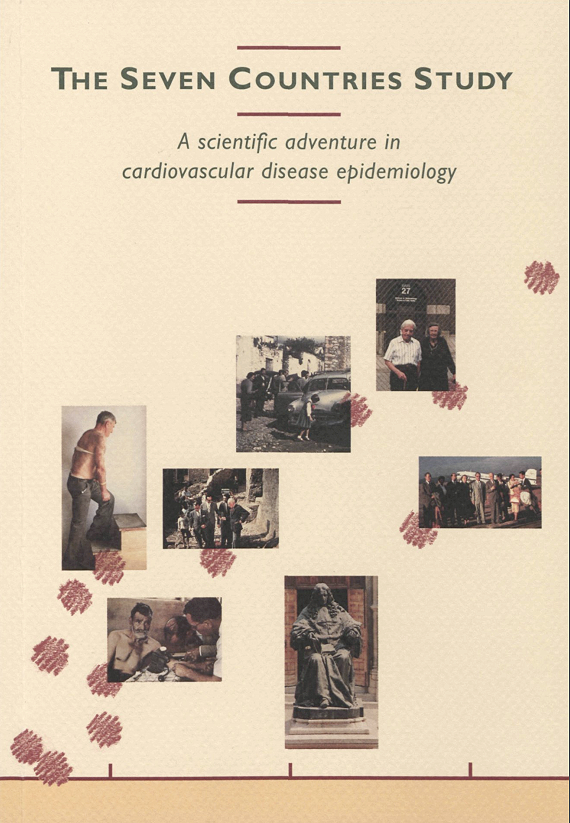 The White Paper, titled “Ancel Keys and the Seven Countries Study: An Evidence-Based Response to Revisionist Histories,” was written by Katherine Pett, Joel Kahn, Walter Willett, and David Katz (Willett and Katz, two of the nation’s leading nutrition experts, were scientiﬁc organizers of Oldways Finding Common Ground conference). By carefully reviewing original sources – and even communicating with some researchers involved in the Seven Countries Study – the authors have thoroughly debunked four common misperceptions of the study:

Detractors’ claim: Keys originally studied 22 countries, but only published data on the seven that backed up his original hypothesis.

The facts: There were never more than seven countries involved in the study.

Detractors’ claim: To avoid the French Paradox – whereby the French eat high levels of saturated fat but somehow have low rates of heart disease – Keys excluded France from his study.

The facts: Data that raised the question of the French Paradox didn’t exist until decades after the Seven Countries Study (SCS) began. France was, in fact, invited to participate in the SCS, but French researchers declined to participate.

Detractors’ claim: Greeks radically change their diet during Lent, so data collected then gave an unrealistic picture of what Greeks really eat.

The facts: Data were knowingly collected in Lent; records show no meaningful diﬀerences between foods eaten during Lent and at other times.

4. Sugar was ignored as a possible contributor to coronary heart disease.

Detractors’ claim: Keys’ actual data show sugar to be more strongly associated with heart disease than saturated fat, but he buried this “fact.”

The facts: Keys speciﬁcally addressed sugar intake in the SCS but found a stronger association with saturated fat.

Cool Things You May Not Know

We’ll leave it to you to read the full White Paper, with its meticulous documentation of each of the points above. But we can’t resist ending by sharing some of the very cool things that struck us, in this fascinating read. 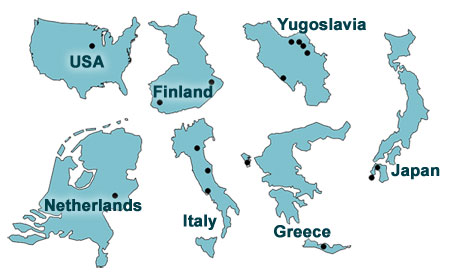 We’re glad to see Ancel Keys’ reputation defended. As David Katz writes in his Epilogue to the White Paper, “None of the ﬁrst-hand accounts of Keys included the claim that he never made mistakes, or the recommendation that he be canonized. All concurred, however, that he was a diligent, meticulous, groundbreaking scientist who followed the data where they led.” Here at Oldways, we concur too.

Steve Michael
Your article hardly pulls Keys out from under the bus. it takes very little effort to look into his "Experimentation" and reported results to find his obvious deceptions he used to convince the who's who of the medical and dietary industry into supporting him and his theories. The very fact he used obvious deceptive tactics in his reports refutes any such efforts to extricate the man who rightly deserves his place under that bus !
Batster
The proof of the pudding is in the eating - Keys followed his own findings and lived to be 100 years old. Good enough for me.
BB
My great grandfather lived to be 104 living on a diet of pecan pie and ice cream with honey. I wouldn’t propose his diet as a healthy way of living.
Eric
The demonization of fat, the completely fake studies about cholesterol (hint, you need it and your body makes 3000 mg a day), and the FDA approving sugar for GRAS has contributed to most of the cancer, heart disease, diabetes, and most other modern health issues. Keyes played an important role in his deceptive "research" and helped cause the suffering and early death of millions.
Dale
Well, here we are decades later. Did we get more healthy?
Batster
No because of people's belief in 'moderation'. People in general aren't prepared to make radical changes. Thinking swapping red meat for chicken once a week and buying semi- skimmed milk doesn't do enough to make the difference. The only people who have documented irrefutable evidence of reversing heart disease (esselstyn and ornish) used an extremely low fat diet with virtually no saturated fats. Unfortunately you can't have your cake and eat it!
Vivian
Also remember the work of Nathan Pritikin who provided substantial documentation of the effects of his diet including angiograms of cardiology patients in a carefully controlled study which showed regression of artherosclerosis years before Ornish or Esselstyn.
Katherine-Oldways
Thank you for sharing! Indeed, research from numerous experts confirms the healthfulness of foods like fruits, vegetables, and whole grains.
Jim
Exactly the opposite. Type 2 diabetes is the highest it has ever been in this country. Heart disease is a serious threat to even seemingly healthy people. Dementia has been increasing in the elderly. Cancer has become more prominent. When I was a kid, I never knew anybody else that had ADD/ADHD issues. Is it a coincidence that about a decade after Ancel Keys' findings that these diseases became more common? Not to mention, dental hygiene has taken quite the hit too. Hint to all: Fat does not cause tartar buildup which leads to tooth decay.
Katherine-Oldways
We too are concerned about the rise of diet-related diseases such as type 2 diabetes. Unfortunately, even though the foundation of a healthy diet and lifestyle (minimally processed plant foods like more vegetables, whole grains, etc.) has been recommended for quite awhile, US NHANES data suggest that Americans continue to eat a diet higher in refined grains, saturated fats, salt, and added sugars than recommended.
Maren Morgan
I eat a basically carnivore diet (my rough daily ratio of animal foods to plant foods is about 80% animal foods to 20% plant foods, on a good day it's closer to 90% animal foods) with TONS of saturated fat (tallow, lard, butter), and I have literally never been thinner or healthier in my life. Of course, you could say that is anecdotal, but there are a lot of people having this same exact experience as me all around the world. PUFAs are the devil here. We've been eating saturated fats for 3 millennia.
Ken Underwood
Keys study was fatally flawed upon multiple levels. For example, the control group (saturated fat) were given margarine loaded with trans fats. Not only did he get the facts wrong, he changed America's diet into a weapon of mass destruction which has resulted in an epidemic of obesity, heart disease, and chronic illnesses at unimaginable levels. His diet recommendations have now failed 3 generations of Americans, leaving them in poor health, diseased, and dying years sooner than they otherwise would have. When will it end? #PrimalBlueprint
Lozgod
What about Norway and Sweeden that were left out? High saturated fat, low rates of heart disease. Me personally I think a whole food vegan can be healthy as well as a whole food keto'er or paleo. Our body is adaptive. The French paradox proves it. Hi Saturated fat, low heart disease. IMHO pick the one you can enjoy and stick to. For me its a paleo keto type diet. I made that decision after lots of experimentation on my taste buds and research. I don't argue I am right or wrong, I only share my experiences. My health and energy has improved. I have gotten off of medications and I look great. It works for me. Just what works for you and do it! There is no argument saying processed foods are healthy. That we can all agree on.
Bianca
I would never lay the blame of this at one man's feet, but I agree with a few of these posters... the push against saturated fats unleashed the demon of trans-fats onto the world. Coupled with the amount of sugar that gets consumed in western diets, this caused innumerable premature deaths. We're getting a grip on trans-fats, thankfully, but now we have to tackle sugar as well. And yet on top of all that, we also need to slow down, relax, and have a sense of community. There are a lot of dimensions to leading a long healthy life.
John. Emm
USA 1980 The Food Pyramid, based on Key's data! Which is exactly when obesity spiked! United Kingdom adopted it in 1992, which (funnily enough) is EXACTLY when obesity spiked!!
Ginger
Ancel Keys is to blame but so is the food industries in both the US and the UK. To this day they are making people ill and killing them and nothing is being done about it.