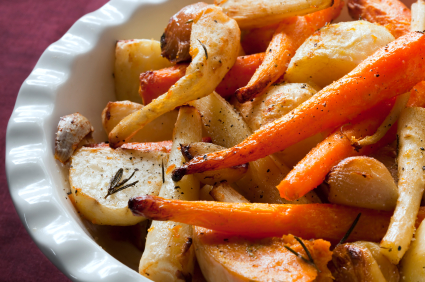 I’ve found an easy way to guarantee at least one new recipe each week — organize a dinner party!  I’ve also discovered that choosing the menu is almost as much fun.  I gather up four or ﬁve cookbooks, combing them for especially yummy recipes that ﬁt the guests, occasion and season – and the amount of time I’ve got to pull it all together. This week I have two new Med-style recipes – the best of the dinner party – roasted root vegetables and a warmed (and spicy hot!) salad dressing.  The menu included: Salmon kebabs, marinated in Turkish spices Whole wheat pearled couscous Roasted root vegetables Kale (or Mache) Salad with Jesse’s dressing The recipe for Stewy Roasted Root Vegetables comes from Volume 3 of Canal House Cooking, the wonderful, self-published home cooking recipe collection by Christopher Hirsheimer and Melissa Hamilton.  Christopher is a writer and photographer — well known for her beautiful food photography.  Melissa is a chef and food editor.  Both women are Saveur alums, Christopher being one of the founders.  I got my copy of Canal House Cooking from Ana Sortun, who gave the Collection to friends for Christmas, calling it one of her favorite things.  www.thecanalhouse.com The spectacular but simple salad is from Jesse Ziﬀ Cool’s Simply Organic Cookbook.  The recipe is called Kale Salad, but the kale I bought seemed old and limp on the day of the party, so I opted for mache.  Jesse told me she created this recipe with an extra kick for one of her favorite farmers, Stewart Dickson.    www.cooleatz.com – Sara Stewy Roasted Root Vegetables Serves 4 Roasted root vegetables have such deep, earthy ﬂavors that you can make this delicious stew and never miss the meat! 4 tablespoons olive oil 1 large yellow onion, sliced 2 cloves garlic, sliced 4-6 large shallots, peeled Salt and pepper 1 small butternut squash, peeled, seeded, and cut into pieces 4 carrots, peeled and cut into pieces 4 parsnips, peeled and cut into pieces 2 cups white wine 3 small bay leaves Preheat the oven to 350 degrees. Heat 2 tablespoons of the oil with the onions, garlic and shallots in a large skillet over medium heat. Season with salt and pepper. Cook until just soft and lightly browned, about 15 minutes. Arrange the squash, carrots, and parsnips in a large baking pan. Scatter the onions, garlic and shallots and any pan juices around the vegetables in the baking pan. Season with salt and pepper. Add the wine and tuck in the bay leaves. Add a drizzle of olive oil and roast until vegetables are tender, about 1 hour. Serve with chopped fresh parsley, if you like. Recipe by Christopher Hirsheimer and Melissa Hamilton in Canal House Cooking (Volume 3) 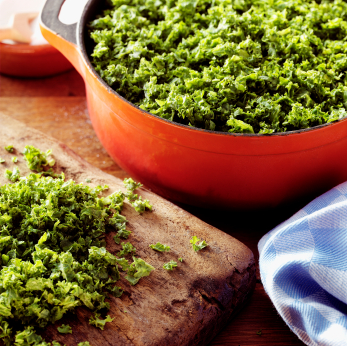 Kale (or Mache) Salad Serves 4 Often, Jesse Cool says she ﬁnds inspiration in farmers’ simple descriptions of how they like to eat what they have grown.  Her friend Stuart loves kale, and this is one of his favorite ways to eat it. 1 large bunch kale, thinly sliced (I used mache) ¼ cup extra-virgin olive oil 1 small red onion, thinly sliced 2 garlic cloves, minced 3 tablespoons balsamic vinegar 1 hot chile pepper, such as jalapeno, serrano, or habanero, seeded and minced Salt Freshly ground black pepper Put the kale (or mache) in a large serving bowl; set aside at room temperature.  Heat the oil in a small saucepan over medium-low heat.  Add the onion and garlic and cook for 6 minutes, or until very soft.  Add the vinegar and chile pepper.  Cook for 1 minute.  Pour the mixture over the greens and toss well.  Season with salt and black pepper to taste and serve immediately. Variation: Jesse says she loves this salad with bits of soft goat cheese crumbled over the top.  I agree. Recipe by Jesse Cool in Simply Organic