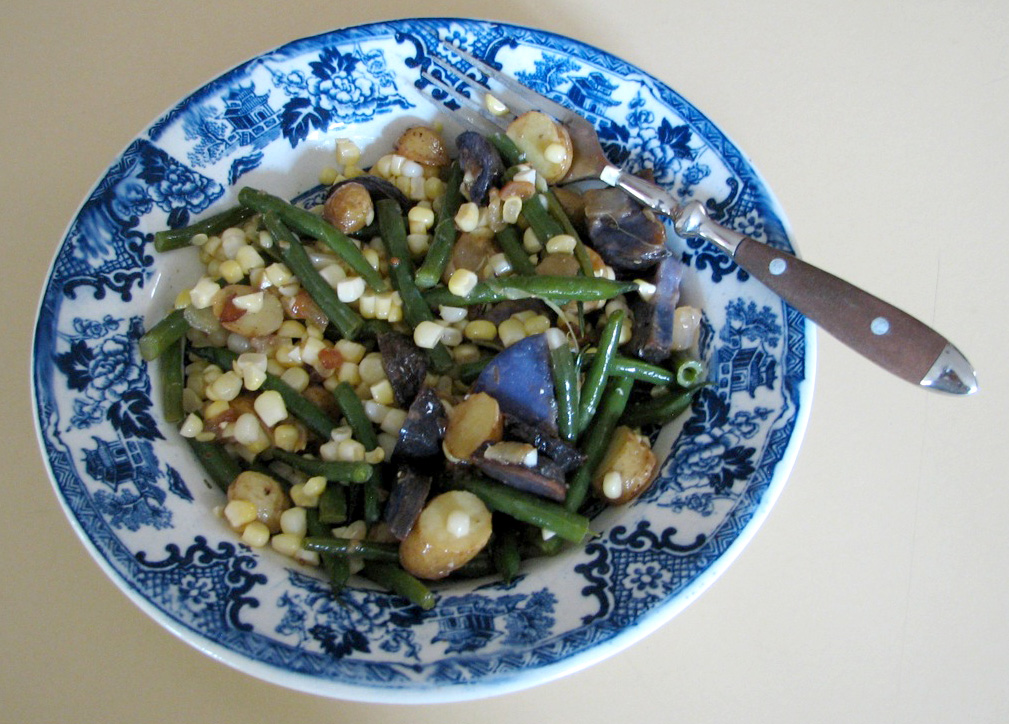 Each Saturday, my husband Lew and I go to the Portsmouth, NH farmer’s market and get hopelessly seduced by a slew of shamelessly tempting vegetables. Now that the kids are grown, there’s only the two of us at home and we should keep that in mind. But the beans are so bright green and thin, just like haricots verts… I can’t decide between the little ﬁngerling potatoes and the funky blue ones… oh look! Renée’s tomatoes have survived the late blight… Barker’s corn was really good last week; let’s get it again. We make a round of the two dozen stalls, checking out what looks good, then circle back, making our choices. Now, at the height of the season, we each carry two canvas bags, because we have to buy the peaches and tomatoes before they run out, and we certainly can’t put the melons or corn on top of them. Or the big mason jar of yogurt from the farm in Rollinsford. With four bags, we can buy in any order we please, just making sure to put Charlie’s eggs on top of everything. At home I spend an extra half hour or so prepping our vegetables, so meal prep is simpler every night. The lettuce is separated into leaves, washed, spun, and packed into large Tupperware containers lined with paper towels (which we later recycle for counter-wiping). The corn is shucked, so it takes up half as much space in the fridge. While I’m doing this, I steam the beets, cool them, and peel them, so they’re easy to slice into salads during the week. (One of our favorite salads is a bed of lettuce, topped with beets, walnuts, and little dabs of blue cheese or goat cheese.) When Friday rolls around, it’s time to clean the last of the old veggies out of the fridge, so I can justify splurging again tomorrow. With that in mind, last night I steamed twice as many green beans as we needed for dinner, and pan-roasted extra potatoes with a bit of onion, olive oil and rosemary. As Lew did the dishes after supper, I scraped the extra potatoes into a bowl, dumped the extra green beans into the potato-pan to wipe up the extra oniony-herby olive oil there, then added the beans to the bowl. I grabbed a big knife and cut the kernels oﬀ the last two ears of corn (yes, raw — try it!), and mixed everything together. An extra splash of olive oil, a little vinegar, some sea salt and fresh cracked pepper, and today’s lunch was ready before last night’s supper was even cleaned up. Ingredients

Method I’m sharing this “recipe” just to give all of you the courage to experiment, without feeling you need to be chained to someone else’s idea of a recipe. Almost any leftover fresh vegetables, tossed in a simple oil-and-vinegar dressing, make a delicious salad on a hot summer’s day. P.S. If you look at the photo you’ll see that I never did decide between the ﬁngerlings and the blue potatoes. I had to buy them both!  — Cindy