Ok, so maybe that blog title is a little misleading. I was not throwing ﬁsh at people on the streets of the Big Apple last Wednesday, and don’t believe any rumors that say so. I was in New York City last week because Oldways teamed up with Brooklyn-based Acme Smoked Fish, Kwik’pak Fisheries of Alaska and restaurateur Eli Zabar to debut the Golden Smoked Bering Cisco to the world. This limited-edition whiteﬁsh is incredibly delicious and unique, so we had to hold the event in a venue that was just as special. And what place ﬁts that description more than Zabar’s E.A.T. in New York City? 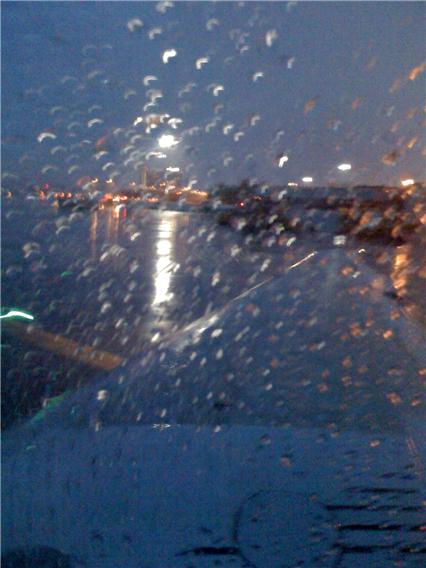 My day started out as pleasantly as it could at 4:30 AM, a time of day that I never wanted to know about. Though I surprisingly woke up on time, I still found myself running through Logan Airport just minutes before my ﬂight was due to take-oﬀ, my phone vibrating violently as Sara was trying to ﬁgure out my whereabouts. It’s never good when your boss texts you something that includes multiple exclamation points. But like a champ, I made it with seconds to spare, and oﬀ into the cold, spitting rain and angry clouds we ﬂew. I would also like to take this opportunity to give a shout-out to Delta Airlines for giving me a FREE bagel with cream cheese for breakfast. I don’t think I would’ve made the entire 45-minute ﬂight without it, and I’m completely serious when I say (type) that. The city was drowning in rain when we arrived. Our cab crawled along Madison Avenue for what seemed like weeks before we ﬁnally arrived to our home for the day, Eli Zabar’s E.A.T. 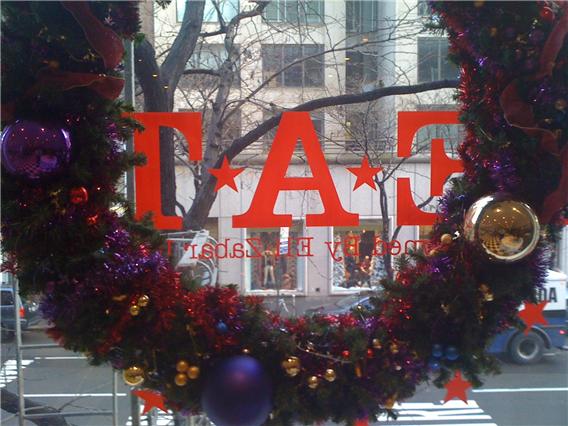 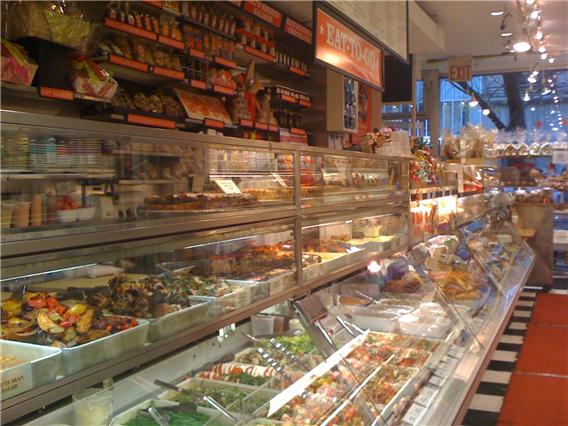 For a foodie, walking into E.A.T. is like falling down the rabbit hole and ending up in Wonderland. Food is literally crammed into every nook and cranny. On one side is the restaurant, and on the other side is a deli where New Yorkers come to pick up their cheese and bread for the week, or just to grab a freshly made sandwich and some coﬀee. The staﬀ is so friendly, even when you try to pay at the completely wrong end of the counter and they have to run down to the cash register through a mass of people to get you your change (…oops). They have wine, gourmet coﬀee beans, and some of the biggest and best pastries I have ever had, but we’ll get back to those later. Our ﬁrst order of business was to shoot a video for Kwik’pak. We wanted to create this video to talk more about the story of the Yup’ik families and why their dependence on the Yukon River salmon makes these ﬁsh so important. It was fun to watch the interviews and the ﬁlming process with all of the big lights and cameras, but I learned one important thing: if a New Yorker wants a coﬀee, they’ll walk right through your shot talking loudly on their cell phone to get it without a second thought. 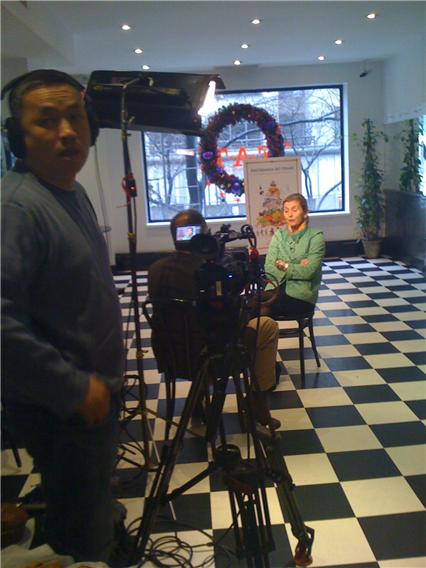 Also, because I’m me, I can’t pay a visit to New York without getting in a heated dispute with a Yankee’s fan at some point. It’s just in my genes. Ken, the cameraman above, managed to lecture me about the greatness of Jorge Posada AND show me a video on his phone that he took at the game when the Yanks clinched the 2009 World Series pennant. It’s okay though, he won’t be bragging so much when the Red Sox sweep them next year. :) 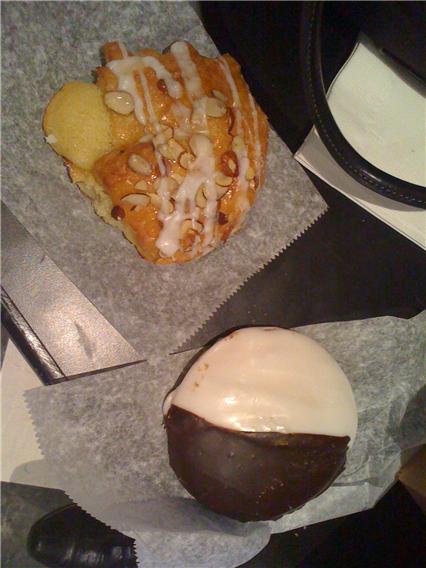 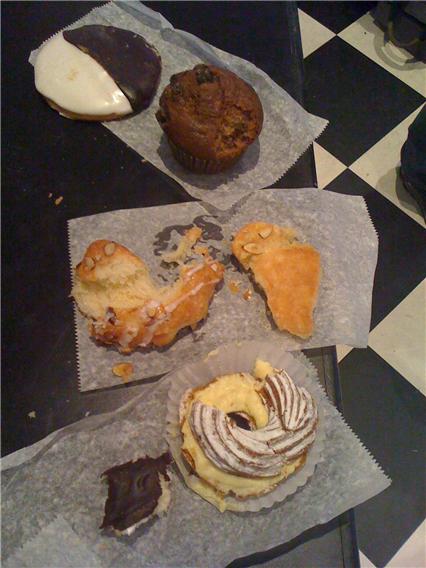 So back to the pastries I was talking about earlier. This really weird thing happened where I went from buying one or two danishes for everyone and then all of sudden, out of nowhere those two treats multiplied into MANY treats. Strange, but I can’t say I was against it. 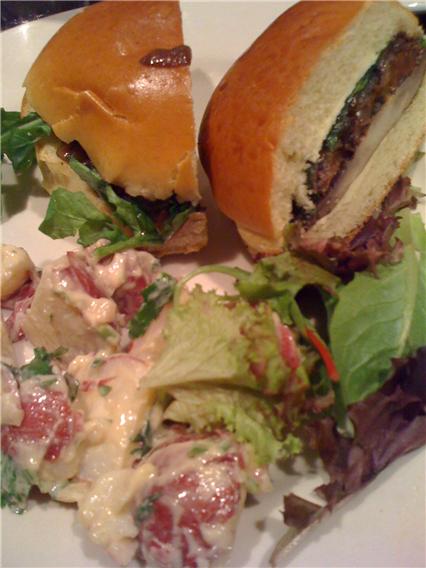 The Oldways and Kwik’pak staﬀ members, along with the ﬁlm crew, got to take a break after shooting and have lunch at the E.A.T cafe. I ordered the Portobello Sandwich with Potato Salad, and I’m drooling just thinking about how good it was. I don’t even usually like potato salad, but everything tasted so fresh that it was hard not to enjoy it. After a quick window-shopping trip down Madison, the Oldways girls returned back to the restaurant to make some last minute preparations, and then it was time for the big event! 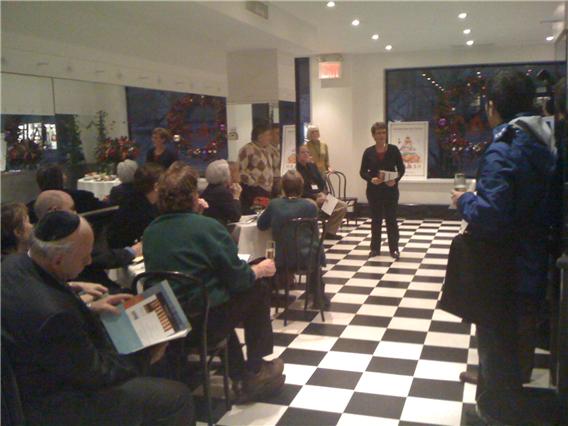 Before the Bering Cisco made its debut on the red carpet, there were some speeches to be made. Ruth Carter from Kwik’pak, Adam Caslow and Buzz Billik from Acme Smoked Fish and Sara from Oldways were among those who spoke, and were on hand to talk about the beneﬁts of this exciting ﬁsh. The Bering Cisco gets its name from the Bering Sea, and is harvested by the Yupik ﬁshing families of Alaska’s Yukon River Delta and is brought to market by Kwik’pak Fisheries, after which it is specially smoked and distributed by Acme. Last year, the State of Alaska gave the Yupik Eskimo people—who sell their ﬁsh to Kwik’pak Fisheries — a 10,000 pound test quota of the ﬁsh.  Acme bought the entire test quota of the ﬁsh and was delighted with the result. This year, Alaska’s fall commercial opening was 10,000 pounds; another 5,000 quota was made available in the winter ﬁshery. This ﬁsh, along with Yukon River Salmon, is very important to the Yupik people who depend on the ﬁshery for ﬁnancial stability. To help tell the story of the whiteﬁsh, Kwik’pak Fisheries partnered with Oldways as part of the Oldways Traditional American Table initiative which celebrates the old ways of eating and living here in the United States. 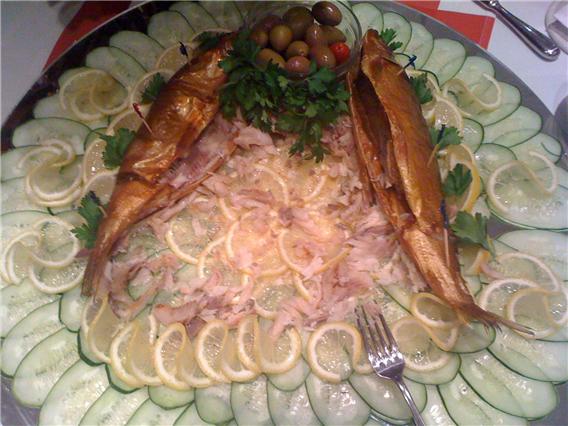 Then it was time for the star of the show to come out! The Bering Cisco was served whole on top of cucumbers and lemons. It was absolutely fantastic, with a buttery, creamy ﬂavor to it that I’ve never experienced before in seafood. As you can see, there wasn’t a lot of the ﬁsh left by the end of the night! 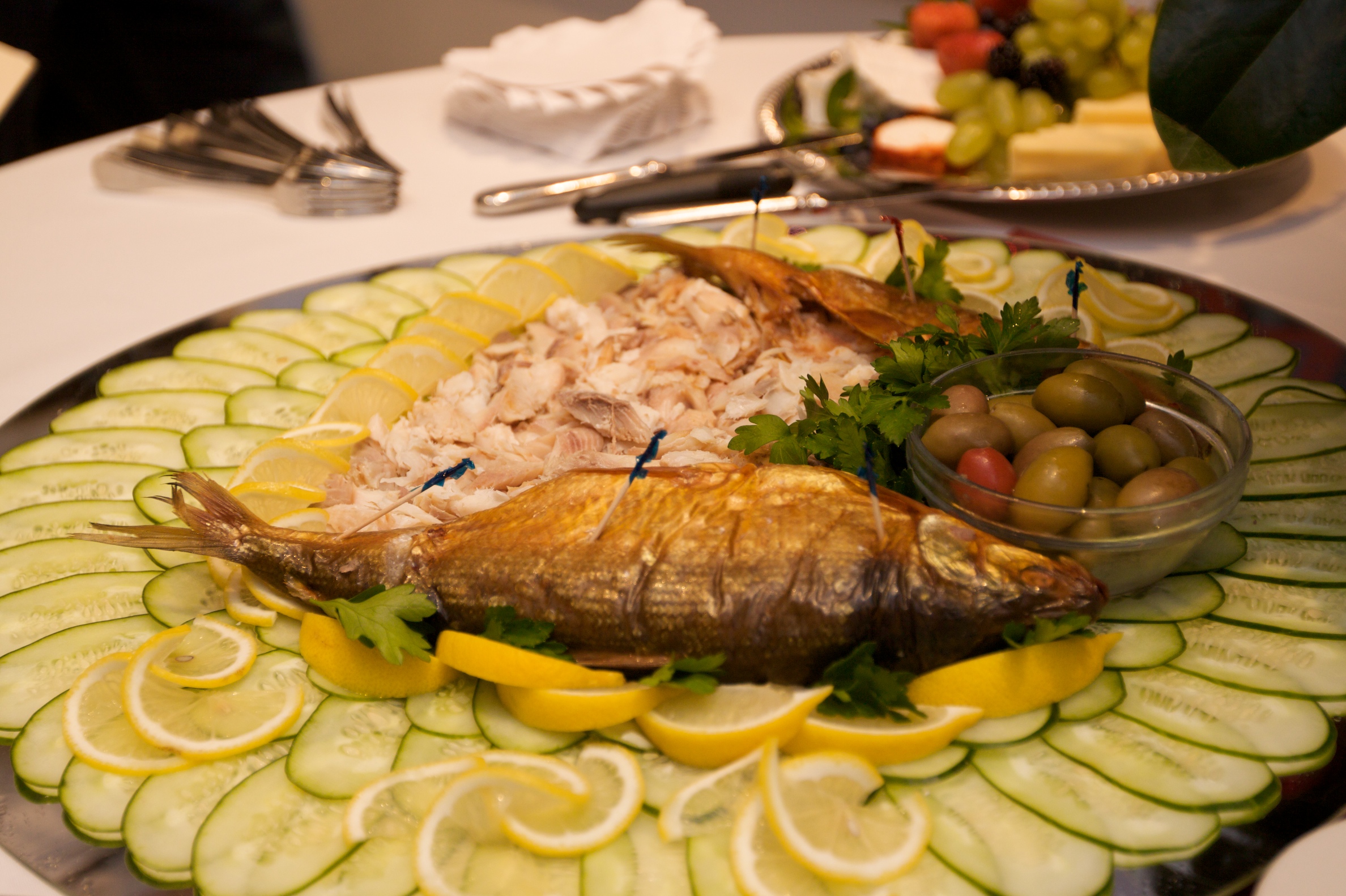 I also got to meet a lot of great people, and perhaps what was most exciting to me as a social media geek was to meet food bloggers Marc, Kathy, and Kim, as well as travel blogger extraordinaire Jeanine! Bloggers are quite an amazing bunch, if I do say so myself. 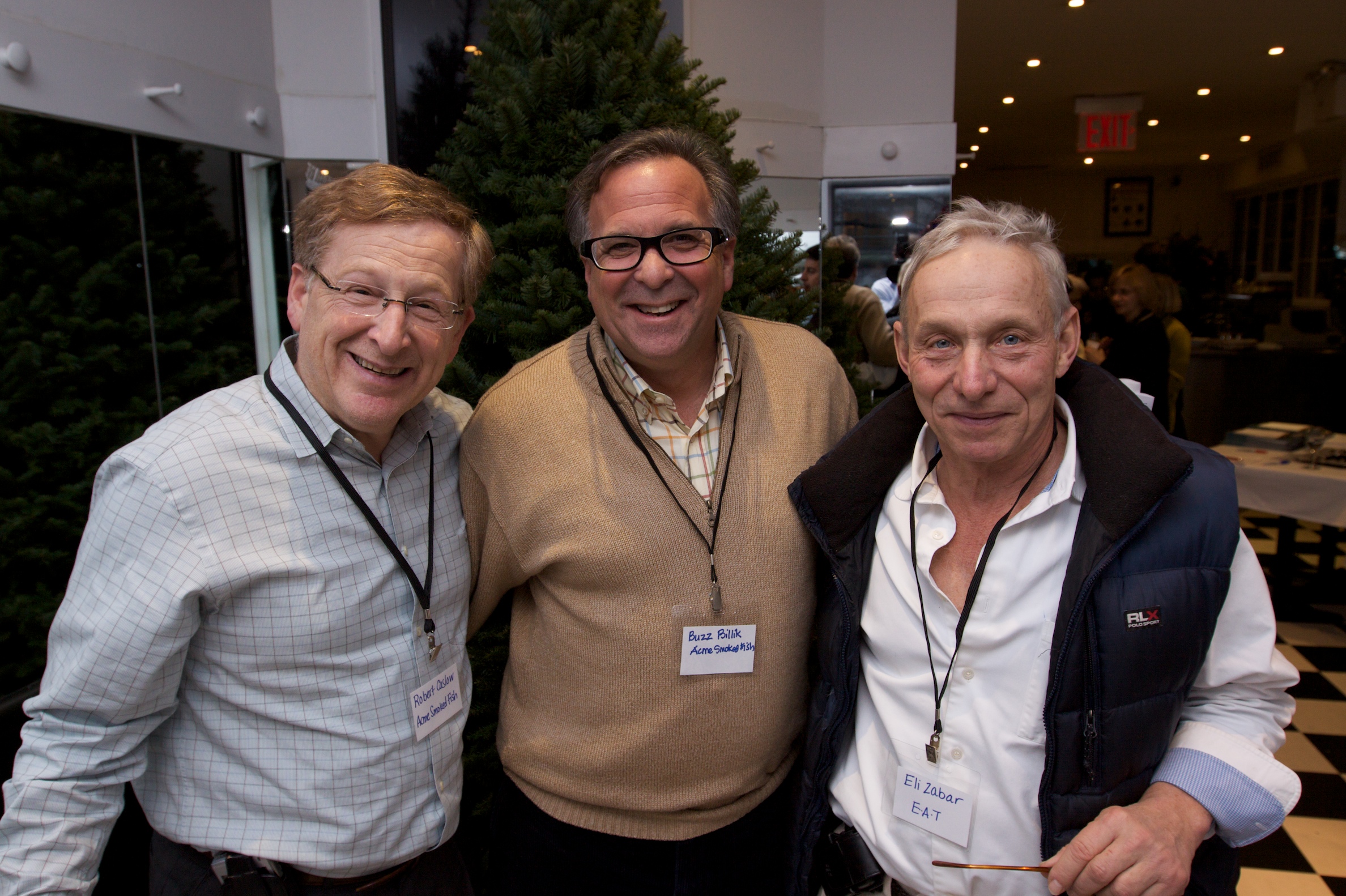 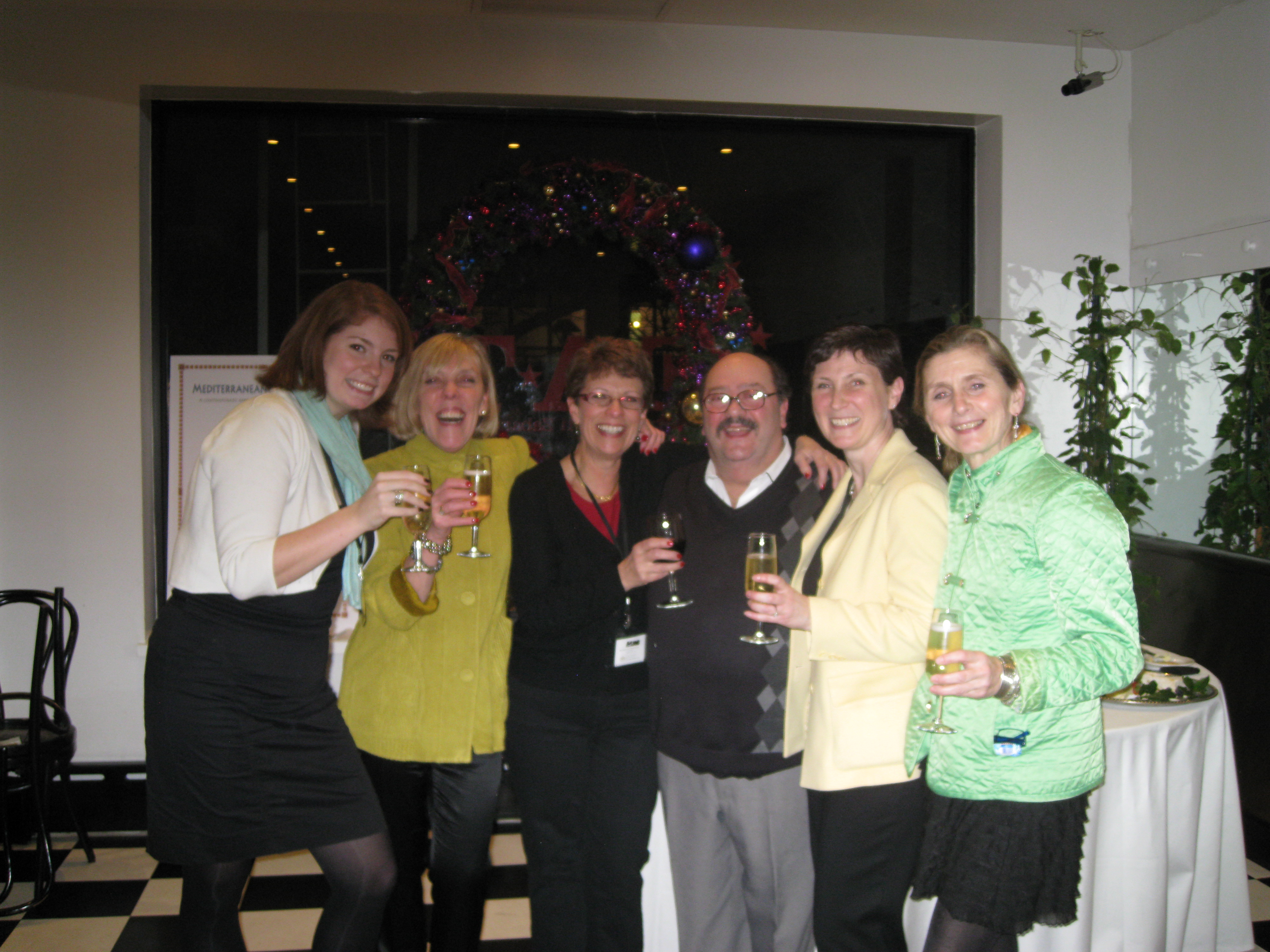 Overall, the event was a complete success (if you can’t tell from our celebration photo above). I’d like to thank everyone who came out and were able to enjoy the ﬁsh with us! I slept like a baby as we took oﬀ from La Guardia that night, our little plane being knocked back and forth like a pinball. That’s what a great event will do to you (or, you know, multiple glasses of champagne).