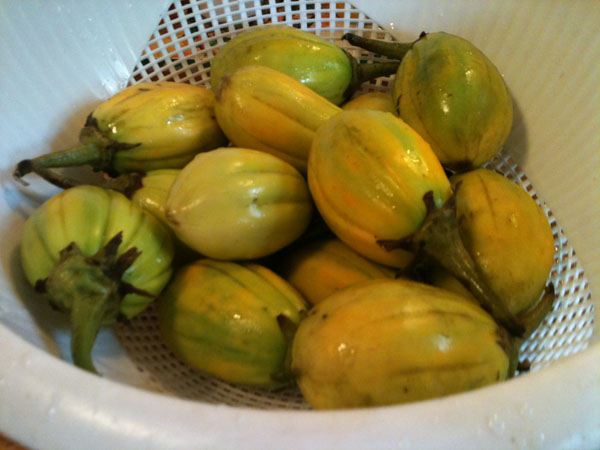 Some people hunt for buried treasure. My radar is set to ferret out vegetables I’ve never met, and bring them home with very little introduction. So, of course, my heart skipped more than one beat when I discovered a large bag of these veggies at Russo’s, in Watertown, Massachusetts, on the discount rack, for $1. The man unloading fresh produce called them Brazilian eggplants and when I asked him how to cook them he sent me to the deli section to ask the Brazilians who work in that part of the store. These women convinced me to treat them just like any other eggplant. A quick Internet search told me that in Brazil, they are called jilo (pronounced zhee-LO). In West Africa, where they are said to have originated, they’re called “garden eggs.”  And I found several sources that reported these veggies get much, much prettier – turn lovely oranges and reds, in fact, when fully ripe – but by then they’re also very bitter so it’s best to eat them at this color stage. I came home, washed them, sliced them in half (they felt like very ﬁrm eggplants), arranged them on a baking sheet, brushed them with olive oil, and roasted them at 425°F for about 15 minutes, until they were soft and starting to brown. I tasted the ﬁrst one, and found it on the bitter side. When I mixed several into a big pot of vegetable stew, they weren’t too bad, but every now and then the bitter taste came through leaving me to believe there must be other alternatives to enjoy these new treasures. Maybe it’s best to salt these and let the juices drain before cooking them? I’ve found one suggestion to eat them sliced, raw, with cerveza, which sounds like a good next step. Does anyone have any recipes?  We’d love to hear from you. —Georgia