It seems that the word “hummus” is undergoing a linguistic evolution. At one time the word described a very specific dish. But with a wide variety of flavors and types of hummus available in the supermarket and countless recipes available for home cook, the meaning of the word "hummus" appears to be expanding along with the US American appetite for it.
FoodMediterranean DietRecipe 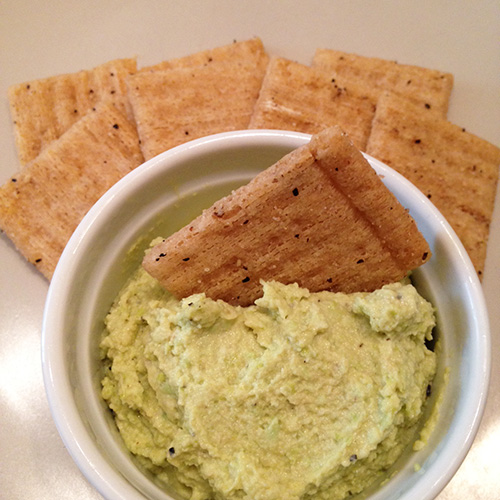 Most days I occupy my time during my morning commute enjoying a book. I have recently been making my way through Robert Lane Greene’s You Are What You Speak: Grammar Grouches, Language Laws, and the Politics of Identity a couple of fascinating pages at a time on my quick ride between Brigham Circle and Copley Square. Greene argues that regardless of whether your grandmother, teacher, or friend is whining that English (or any other language) is in decline because of how lazy or ignorant “people are today,” it is not. All languages changes over time with the introduction of new words, alterations in grammar, shifts in word deﬁnitions, and the phasing out of antiquated words.

But what does any of that have to do with food? It seems that the word “hummus” is undergoing a linguistic evolution of its own. At one time the word described a very speciﬁc dish, namely a creamy paste made of chickpeas and tahini, seasoned with lemon juice, garlic, and olive oil. Hummus, originally from the Middle East, was once a wildly exotic food served in the United States most often in the context of learning about foreign cultures (does anyone else remember sampling the nutty, slightly gritty, beige concoction at their school’s “international fair” for social studies class?). But hummus has clawed its way oﬀ of the “Israel” or “Lebanon” table in the middle school gymnasium and into more than 20% of US American homes. Hummus has become so humongous that the leading manufacturer in the United States is working with farmers in Virginia who once raised tobacco to switch to raising chickpeas to keep the US hummus supply robust. (Most domestic chickpeas are raised in the Paciﬁc Northwest.)

And while 1 in 5 of us pick up hummus at the grocery store, we’re not all buying that traditional dish we discovered in eighth-grade geography class. Many of us are purchasing or making ﬂavored hummus, ranging from Mediterranean-inspired ﬂavors like Roasted Red Pepper and Hummus with Roasted Pine Nuts to globally inspired ﬂavors like Spicy Chipotle and Asian Fusion Garden Hummus. And we’re not stopping with adding ﬂavors to a traditional chickpea-based hummus. We’re reaching for and mixing up our own edamame, black bean, white bean, lentil, and fresh pea hummus.

So it seems that the deﬁnition of “hummus,” a word once limited to describing a very speciﬁc combination of ingredients, has expanded in American English to mean a dip or spread made from any type of bean. And this broadening of deﬁnition can only be interpreted as positive. So often we hear about the catastrophic state of the American diet and focus on the dire news about public health. But if we have adopted a word into our language and have massaged its deﬁnition to describe a whole series of dishes that oﬀer us healthy ﬁber, protein, vitamins and minerals, and a low glycemic index, our collective diet is not all bad. So here at Oldways we’re celebrating the expanded deﬁnition of hummus and working hard to expand other healthy components of the American diet.

Directions:
Combine edamame, chickpeas, garlic, lemon juice and lemon zest in the bowl of a food processor. Add a small dash of sesame oil (be careful, a little bit goes a LONG way!), then close up the lid and turn the food processor on. Drizzle olive oil through the feeder tube with the food processor running to help the edamame and chickpeas come together in a smooth paste until you reach the consistency you like.

You can replace the sesame oil with tahini if you prefer. You can also add extra ﬂavor by adding a ﬁstful of fresh herbs like parsley or cilantro to the edamame and chickpeas at the beginning.