The Great Gluten (Free) Experiment: Falling Off the Wagon 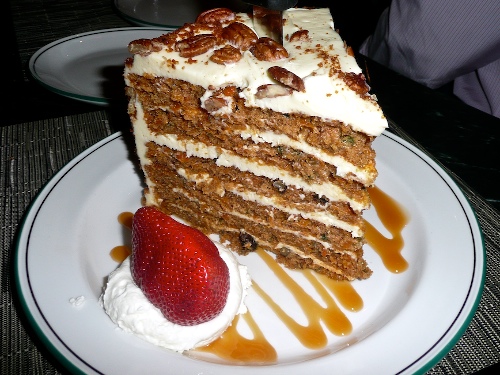 Well, it was bound to happen. Though I’m ashamed to admit it, this past weekend…I fell oﬀ the gluten-free wagon. I recognize what a distinct advantage I have to not have Celiac disease, and thus be able to slip and eat something containing gluten without serious consequences.  For the purpose of this experiment I was really hoping to go completely cold turkey for at least a month, but Friday night, staring down a huge piece of complimentary carrot cake while out to a fancy dinner with my boyfriend, my resolve crumbled. What the heck, I ﬁgured…I’ve been eating gluten my whole life, and sure, it seems to have been bothering my stomach the whole time, but this cake looks AMAZING. And my mood has been great, how much of an eﬀect could a bit of cake possibly have? Besides, I’m out celebrating with John, and it’s not like eating a huge bowl of pasta! First, let me say…that carrot cake was incredible. It really wasn’t even a piece of cake – it was more like a full quarter of a whole cake. And because it was the ﬁrst time we’d been to this restaurant, it was on the house! But I paid for it in other ways… Surprisingly, it didn’t seem to bother my stomach too much. But within 20 minutes, my mood took a signiﬁcant hit. To quote my better half, in the car on the way to the movie half of our date: “You never should have eaten that gluten…now you’re being a sourpuss!” Oops. Sorry, honey. Having come through the ﬁrst half of my usually moody two-week period feeling amazingly buoyant, I’d begun to think there might be something to this gluten-mood connection –and my quick mood-dive certainly seems to support that theory. Less than a half hour after eating the cake, I felt grouchy, out of sorts, and overly sensitive. I did swing back up after an hour or two, but the swinging – up and down – continued over the next couple days. As usual, I’d be bummed out and staring into space for a while, and then I’d be back to my cheery self, only to be set oﬀ into glum-dom by some small thing. At ﬁrst I thought that maybe the continued feelings of over-sensitivity might have just been because I was now in the second, and generally worse, week of my usual moodiness. But now that I’ve been a couple days back on track with gluten-free, I’ve felt consistently really good. It seems I may have found a possible solution to my PMS moods, which would be fantastic. It certainly gives me good motivation to stay on track from now on! Interestingly, my stomach seems to be have been largely unaﬀected by my brief lapse; I have yet to see any kind of real change there yet. It seems like it may still take several weeks to determine if going gluten-free is a solution for my stomach issues – I’ve heard it takes 4-6 weeks for the intestines to heal if gluten has irritated them, and often longer than that to feel a signiﬁcant diﬀerence. In the meantime, now that I’ve caught a glimpse of gluten’s possible eﬀect on my mood swings, I am determined to stay ﬁrmly on the wagon from now on! Bon (g-free) appetit! Molli