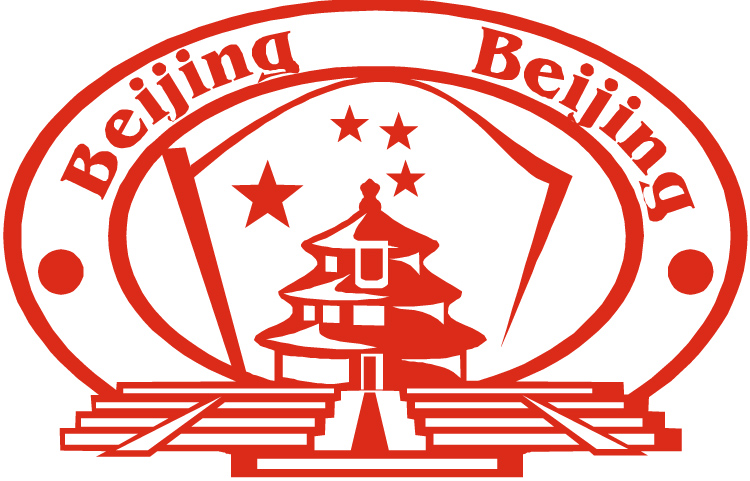 I don’t know what it is about international travel, but every time I journey outside U.S. borders, I return home with a changed perspective on food and culture. I’ve been traveling since I was little and have always viewed the opportunity to go “elsewhere” as a necessity rather than a luxury. Each experience abroad enriches my life, opens my mind, and adds new ﬂavors and textures to my mental catalog of amazing food and drink. Maybe what I relish is the sense of adventure inherent in being away from all that’s familiar and comfortable, or maybe it’s knowing that I’ll see things and try foods that I’ll probably never experience back home. But whatever the reasons, here I am, back on home turf for more than six weeks and still thinking about my time in China. Spending two weeks in Beijing was an incredible experience in so many ways. First and foremost, the WGC senior staﬀ was there to help China begin to explore ways to promote greater whole grain consumption. Talk about a monumental honor! Even if I hadn’t planned for some personal exploration time, learning of the challenges China faces on their path towards making whole grains their norm would be plenty to keep the mental wheels turning. But I’m a big believer in adding on a few vacation days when work takes you half-way around the world, and nothing ejects you from your usual routine quite like jetting oﬀ to a country where you can’t read or speak the language. Top this oﬀ with the constant knowledge that you’re wandering around one of the biggest, oldest, and most populated cities in the world, and maybe it’s more surprising that I can think of anything besides my time in China! So without further ado, here are Four Food Rules I realized thanks to my time in Beijing: 1. One man’s fried scorpion on a stick is another man’s barbeque river ﬁsh. My little grandmother used to say, “Taste is universal,” and although it was a bit hard to 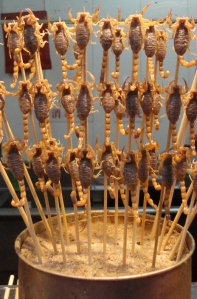 understand what this meant as a picky teenager attempting to survive on PB&J alone, I grew to appreciate this phrase as her way of saying that everyone tastes things diﬀerently. This is certainly true when it comes to regional cuisine and specialties. Beijing is famous for providing ample opportunities to taste all eight of China’s main cuisines, and there are at least a dozen other tribal and regional food traditions that you can ﬁnd if you’re hungry and go looking. Yes, the scorpions on sticks are mainly intended for the daring tourists, but insects can provide protein in diets where availability or expense might otherwise prevent the inclusion of this important nutrient. And while barbeque river ﬁsh might seem like the more innocuous choice of the two, I can say from unfortunate experience that “just any old river ﬁsh” won’t do. Two similar dishes in two diﬀerent locations made one thing very clear — the fresher the ﬁsh, the cleaner its waterways, the better it will taste. 2. Taste everything you’re served at least twice, even if the second taste is just to make sure you never want to taste it again. As a child, I was often subjected to the “no thank you” helping – in other words, a heaping spoonful of any dish I said “no thank you” to. As an adult, I stopped saying “no thank you” and just starting trying things, ﬁguring if I was going to be subjected to something I didn’t totally like, I might as well make the 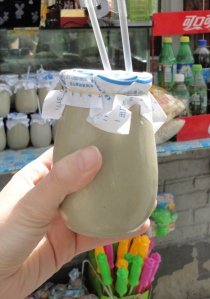 choice for myself. While in Beijing, I tried plenty of things that I’m not sad I’ll never eat again. Grilled donkey meat that tasted more like barnyard (you could taste the barnyard!), the liquid squeezed during the tofu-making process that tasted like cabbage water, millet gruel liberally topped with salty sesame paste that smelled like sesame butter but tasted like wallpaper paste, and yes, even the fried scorpion on a stick… These things and more I tasted once, then tasted a second time, just to be sure I was tasting what I thought I was tasting. Not everything you try in life is going to make you fall over with joy and leave you thinking it was the most amazing thing you’ve ever eaten. But that’s okay, because some things – fresh tomatoes stirred into watery scrambled eggs, thick jelly made from hawthorn berries, sweet and tangy runny yogurt served lukewarm in small ceramic jugs – will be amazing. And how will you know whether or not you’ll like it until you’ve tried it?

3. As far east as you may go, every Far East may eventually become the West. Okay, this one’s a bit complicated, so bear with me. For every incredible and traditional meal I ate, I saw signs of modern Western food or food ideals sneaking in around the corners. Teenagers in Beijing go on ﬁrst dates to fast food restaurants because chicken nuggets and cheeseburgers are more exotic (and yes, more expensive) than traditional Chinese dishes. Buying and eating food made with reﬁned grains such as white noodles, white rice, and pearl-white steamed buns is a sign of aﬄuence, a symbolic showing of your prosperity. For every person I saw drinking bottled tea, I saw several dozen more drinking sugary soda or fruit juice, and almost no one drinking bottled water. And while there was no doubt I was in a foreign country, there were times when things felt so familiar, so Americanized, that I had to remind myself that I was, in fact, in China. It’s a strange sensation to try and explain, feeling as though the city you’re standing in is both so old and yet, somehow at the same time, so young. I believe in the importance of a cultural melting pot, of blending the old and the new in ways that maintain the importance of the old ways without letting them grow stagnant, or without the old ways becoming lost beneath the onslaught of the new. It’s a delicate balance, and I’ll be the ﬁrst to admit I don’t always keep my own food traditions alive in the rush and bustle of my daily life. So although I wonder how a thoroughly modern, thoroughly ancient city like Beijing will manage in the years to come, I don’t worry too much about the future of China’s food traditions. After all, they’ve been perfecting traditional cuisine for thousands and thousands of years!

4. Everything is more fun when eaten with chopsticks. This actually goes hand in hand with trying new or unusual dishes – try eating your food the way the natives eat it! 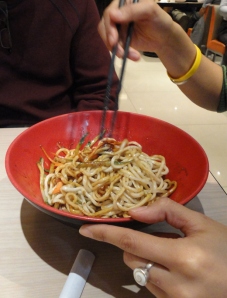 Yes it can be a little daunting if your chopsticks skills aren’t great, but the best way to improve at something is practice, right? Not only will you get better with chopsticks within a few days of using them at every meal, you might actually ﬁnd yourself enjoying the experience and eating more slowly. If you ﬁnd your plate to mouth skills are not on the up and up, you can always revert back to using a fork and knife, but give yourself at least three days of trying before you call it quits. I personally ate every meal in China with either a pair of chopsticks or by holding the food in my hands, with the exception of cracking a hard-boiled egg (chopsticks) or spreading jam on toast (hands). I’ve noticed I’ve been cooking more meals that are easy to eat with chopsticks since returning to the states, and every time I do, a little part of me is back in Beijing. Oldways wants to know – What food rules have you brought home from a memorable trip abroad? —Kara