Michael Pollan advises in his 2009 book In Defense of Food that we should eat food that our great-grandmothers would recognize as food. Pollan's advice led us to think about culinary memories and traditions we have inherited from our own grandparents. Hannah shares her memories of visits to her Jewish grandparents in Brooklyn and Long Island.
cookingFood 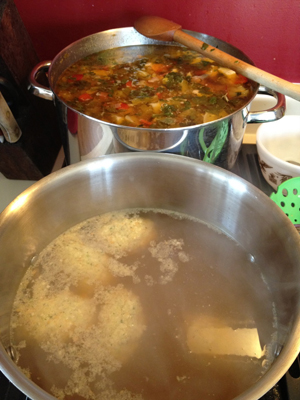 Michael Pollan somewhat famously advised us in his 2009 book In Defense of Food, “Don’t eat anything your great-grandmother wouldn’t recognize as food.” Pollan’s advice led us here at Oldways to think about what our own grandmothers (and great grandmothers) cooked, and which family culinary traditions continue to be carried down through the generations in our own families. I agreed to get us started as I prepare to celebrate Rosh Hashanah (the Jewish new year) this week.

Growing up in a Jewish family of eastern European descent meant distinct food memories from a young age. On school breaks and around holiday times my parents would pile all ﬁve of us kids into the minivan and journey from Vermont to New York to visit our grandparents. Food was always a wildly important part of hospitality for my grandparents.

When we stayed with my maternal grandparents in Long Island every day started with breakfast prepared by my grandfather, whom we aﬀectionately called Pop. From the bedroom at the top of the stairs where four of us siblings slept, you could identify breakfast even before you rolled out of bed. If the scent of homemade pancakes wasn’t wafting up the stairs, you could be certain that Pop had gone out and gotten fresh bagels. He’d slice them—often still warm from the bakery—and then spread the cream cheese so thick that it completely ﬁlled the hole in the bagel. But sometimes pancakes were on the griddle, and we happily devoured pancakes bigger than our heads as Pop pulled them oﬀ the stove. Whether we started the day with pancakes or bagels, no sooner were the plates cleared from breakfast than we were discussing the menus for lunch and dinner.

And when we visited my paternal grandmother in Brooklyn, we’d be greeted by the aroma of her home cooking as soon as we hugged her hello in the doorway of her apartment. Chicken soup, matzah balls, kreplach (silky little pasta dumplings ﬁlled with ground meat bobbing in chicken broth), geﬁlte ﬁsh, veal cutlets, and pink applesauce (made pink with the addition of red jello powder) are the dishes that left indelible memories.

Chicken soup with matzah balls and geﬁlte ﬁsh were the two dishes that migrated from my grandmother’s kitchen to our family’s kitchen in Vermont, and now to my own home in Boston. They are the ultimate comfort food for our family. My mother will prepare a batch of one or both when we return home for visits. They both annually grace the holiday table at Rosh Hashanah and Passover, and for many years were even integral to our family’s celebration of Thanksgiving.

This week I’ll be making my own pot of chicken soup and batch of geﬁlte ﬁsh as part of my celebration of the new year. I won’t be traveling home to Vermont to celebrate with my family, but the ﬂavors of home will connect me with my siblings, parents, and even grandparents despite the miles. 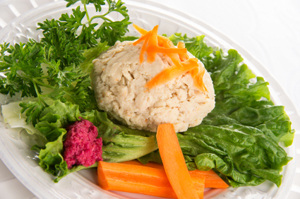 “But, what is geﬁlte ﬁsh, anyway?!” you ask. It is simply a ﬁsh meatball, traditionally part of the culinary repertoire of Ashkenazic Jews (those who trace their ancestry to central and eastern Europe). To make geﬁlte ﬁsh, I grind a carrot, an onion, a celery stalk, and fresh parsley ﬁnely in the food processor and add them to about a pound and a half of ground ﬁsh (whatever white ﬁsh the market has available). I bind the mixture together with egg and matzah meal and season it with salt, pepper, and sugar (yes, sugar!). Then I form balls from the mixture and poach them in seafood stock. Geﬁlte ﬁsh can be served hot or cold (we prefer it cold in my family), and is most often served with a healthy dose of horseradish.