Fall is Here: Bite into Your Favorite Apple and Enjoy!

Although the onset of fall seems to sneak up on me every year, I am reassured by the autumn staples that permeate the landscape and provide a familiar comfort. Bright foliage, crisp air, and pumpkins popping up everywhere mark the transition of the seasons, but one fall staple stands out in my mind and instantly reminds me of my childhood…APPLES!

Although the onset of fall seems to sneak up on me every year, I am reassured by the autumn staples that permeate the landscape and provide a familiar comfort. Bright foliage, crisp air, and pumpkins popping up everywhere mark the transition of the seasons, but one fall staple stands out in my mind and instantly reminds me of my childhood…APPLES! Fall is apple picking season, and especially in New England, this pastime seems to elicit an emotional response from everyone. At the mention of apple picking, I am instantly brought back to the hayride at the apple orchard and the wonder of discovering diﬀerent varieties of apples.  I remember climbing the trees in search of the perfect apple, and trying to ﬁt as many as I could  in my bag before upsetting  the balance. Apples always seem to taste better while picking them, and I remember the plethora of pies, apple sauce, and crisps that would follow a visit to the orchard. Since fall is now oﬃcially upon us, I asked several Oldways staﬀ members to share their memories of apples. 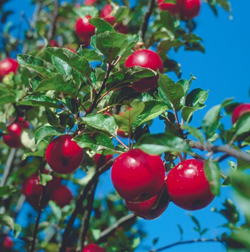 While I’m always sad to say goodbye to summer, I do enjoy the fall.  I love the crisp air and vibrant foliage, but most of all I love that it’s apple picking time!  As an annual tradition in our family, starting when my kids were babies, we would pick a day and an orchard (there are lots to choose from in our neck of the woods!).  My husband would hoist the kids up on his shoulders so they could reach the apples on the higher branches and compete to see who could pick the most.  Inevitably, we’d come home with way too many apples and I’d spend the following days ﬁnding new ways to use the fruits of our picking labor.  Even now, as teenagers, they still love to go apple picking with me and I hope we always keep that family tradition.
- Karen Mansur, Program Manager


Cortland, Cameo and Crispin, oh my!  For me, it would not be fall without a visit to a New England apple orchard.  Even as an adult the thrill of walking through the orchard and choosing my apples as they still hang from the tree is something special. Also something special: homemade applesauce!
- Rachel Greenstein, Communications Manager

Our house stood at the top of a hill, and down in one of the closest valleys there was an antique apple orchard with several dozen trees.  A few times a year my father mowed around them to keep the underbrush from taking over, and he also carted away limbs and branches broken by heavy snowfalls. But the trees were on their own to deal with diseases, insects, and deer. Today we’d call them organic.

From the time I could walk, throughout the fall my mother and I would follow a narrow path through the woods to the orchard. In early August we would ﬁrst wander down to check on the apples’ progress and then our visits would become more frequent as the diﬀerent varieties ripened. We collected what we wanted in big burlap bags.  An “apple man” from Cornell had once visited and helped us identify the trees. One of our favorites was the Maiden Blush, a big yellowish apple with distinct pink cheeks.

My mother insisted that apple pie and applesauce were downright insipid if they weren’t made with at least three diﬀerent varieties, so we had to come home each time with several kinds.  One of my favorite jobs was climbing up in the trees and choosing apples to toss down to my mother. The bags could get quite heavy but we solved that problem by bringing along a gigantic old baby carriage. It had big rubber tires that smoothly rolled over tree roots and sticks in the path. When we’d ﬁlled it to the max, we would push it back up the hill, bring the bags of apples into the kitchen, and get to work making pies and applesauce. My ﬁrst glimpse of an array of apple varieties for sale at farmers markets in the fall takes me in a heartbeat back to those adventures.
- Georgia Orcutt, Program Manager

I don’t think I knew much about apple varieties until I reached adulthood and had access to a good farmer’s market, where I can choose from Macouns (my favorite), Jonagolds, and so many other varieties. When I was a kid in Massachusetts, what we ate were mostly local McIntoshes, and what we cooked with were Cortlands, still my go-to pie apple today.  Fortunately for my taste buds, Red Delicious (with their often vacuous taste and tough skin) 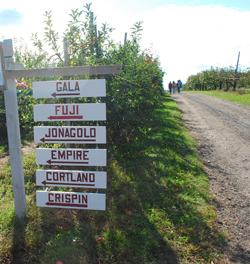 didn’t become the “default” apple until I was a bit older.

My favorite “apple memory” is of making apple pies with my mom. Her approach was to peel the apples before cutting them, and we would always compete to see who could remove the entire peel from the apple in one continuous spiral of the paring knife, from one end of the fruit to the other. Then we’d cut the apples into wedges, remove the seeds, chop them up, and add sugar, cinnamon, nutmeg and a little lemon juice. Mom would roll out the pie dough, and give us the scraps.

When you are seven or eight years old, there is nothing more delicious on a New England autumn day than your own little mini-pastry, created by scraping up all the remaining cinnamon-sugar in the bowl with a wedge of apple, wrapping it in pie-dough scraps, and popping it in the oven to make a tiny apple pie, not more than three or four bites big.
- Cynthia Harriman, Director of Nutrition Strategies