Eating On A Budget In Europe: Part One

After I ﬁnished my semester abroad in Paris, I spent 3 weeks backpacking across Europe with my best friend Katie. It was one of the most amazing experiences of my life, and we did it with almost no money. How did we manage that, especially being such foodies? Simple, really. It is possible to eat amazing local food on the stringiest of shoestring budgets – you just need to know what to look for, which foods to target, and when to opt out. Country by country, here’s how it went… 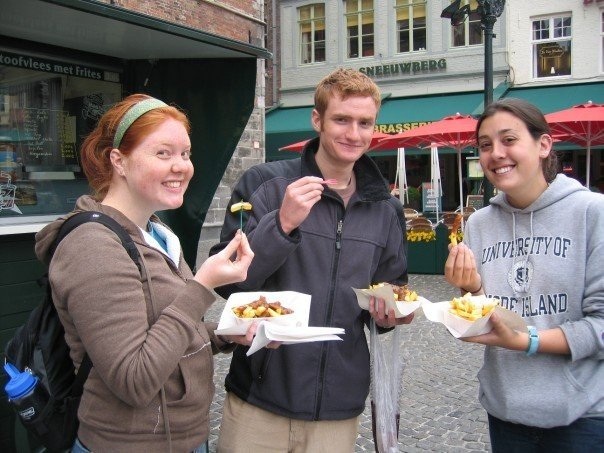 Bruges, Belgium: Fries Our ﬁrst stop was in the precious little town of Bruges, which, as a part of Belgium, is known for its frites, or fries. These can be found in just about any restaurant, but the cheapest way to sample this delicious local cuisine is by street vendor. In the central Market Square there are two fry carts, or frituurs, each with a dizzying variety of dipping sauces and toppings. At the recommendation of the cart vendor Katie and I opted to try a meat sauced called (if memory serves) stuﬀelsaus – essentially beef stew, poured over the fries and are eaten with a small fork. For just a few Euros, we got a ﬁlling and incredibly authentic Belgian meal. Just don’t eat too many…it’s not exactly health food! 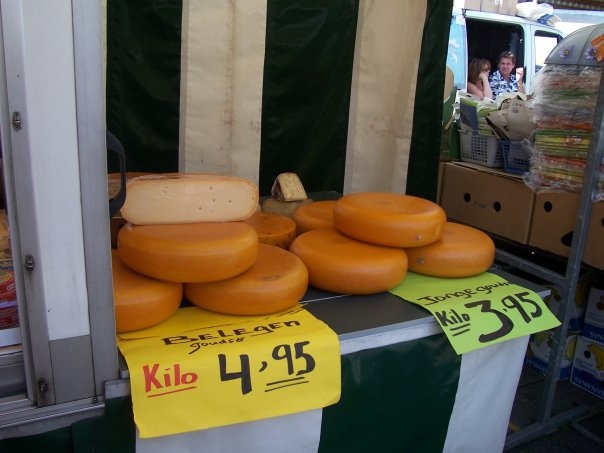 Amsterdam, Netherlands: Gouda The next stop on the trip was Amsterdam, and after spending a day doing typically touristy things (and strangely enough, eating Chinese food) we decided to rent bikes and venture out into the surrounding countryside. Much to our delight, just outside the city we happened upon a local farmer’s market, selling, among many other things, real Dutch Gouda. Being huge cheese fanatics, we couldn’t resist buying a large chunk, which we ate along with the granola bars we’d packed while sitting in a nice grassy area near the market. You’ll notice the prices on the cheese are €4 or €3 a kilo – that’s roughly about $2-$4 a pound. If we hadn’t had to keep biking all day, I would have bought an entire wheel! 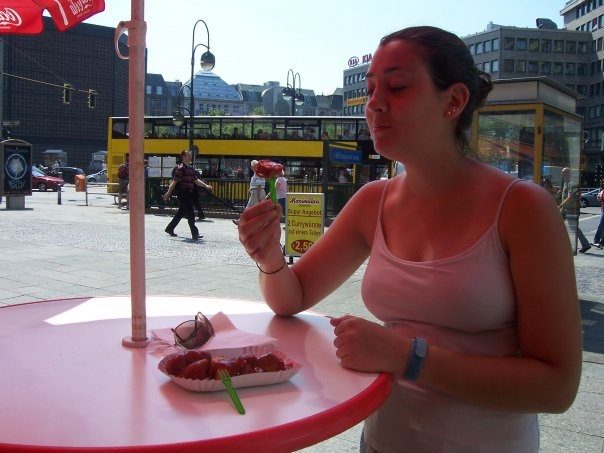 Berlin, Germany: Currywurst You can’t go to Germany without trying some variety of wurst, so when we spotted a street vendor (you may begin to notice a theme here…) selling something called currywurst, we had to try one. The dish consists of a hot pork sausage, covered in a ketchup-based curry sauce and sprinkled with curry powder. It’s essentially a dressed up hot dog without a bun, and it is quite delicious. It was only about €1.50, and made for a tasty lunch in the middle of a long sightseeing day. 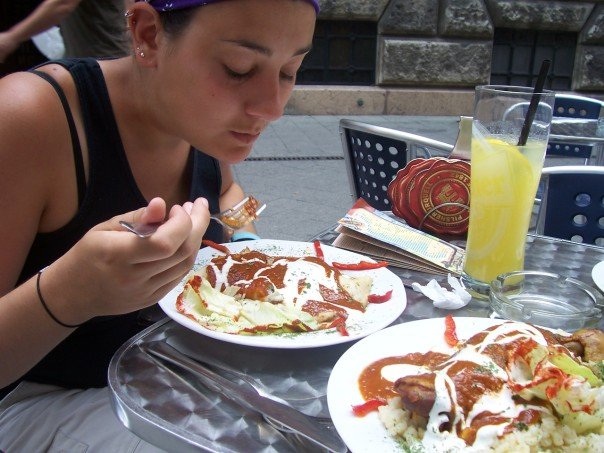 Budapest, Hungary: Chicken and potato w/ paprika (I think?) Part of the fun of traveling in countries where you don’t speak the language – at least, in my mind – is sitting down in a restaurant, blindly pointing to the cheapest dish on the menu, and saying, “I’ll have one of…whatever that is, please.” Katie and I ended up with some really cheap and tasty meals that way! Our best was in Budapest, where we ended up with what appeared to be chicken and some form of potato, all covered in a delicious paprika sauce – much of the world’s paprika comes from Hungary, so we were delighted to get to try some. The trick here is to ﬁnd a place that is inexpensive but still attracting some people who seem to know what they’re doing, and be brave! 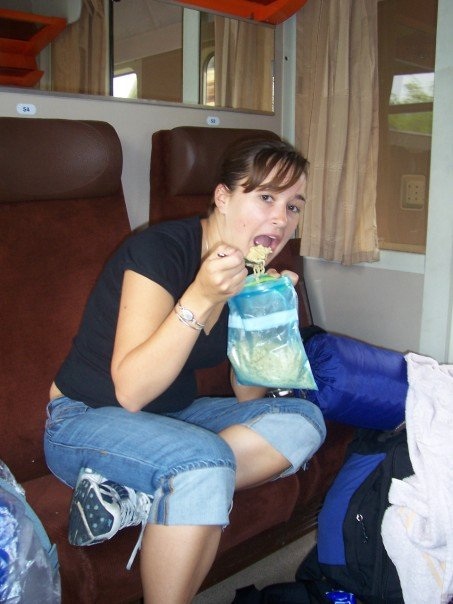 In transit: Cook for yourself Because we crammed so many places in such a short period of time, Katie and I spent a LOT of time on trains, even sleeping on them overnight on several occasions. This made ﬁnding food that wasn’t from an overpriced station vendor a bit tricky. Fortunately, we spent some of our nights in hostels, and were lucky enough to have a couple with communal kitchens for guest use. The night before we knew we were in for along train ride, we cooked up some Ramen noodles – you can ﬁnd these anywhere! – and put them in a plastic bag in the kitchen refrigerator to take them with us in the morning, along with some plastic forks. Cold noodles out of a bag isn’t the greatest lunch, but it does the trick in a pinch. Take home lessons so far: Eating while traveling doesn’t have to be expensive, and hunting for cheap deals can be a part of the adventure! Stay tuned for Part Two!  — Molli