We’ve all heard it: “Eat breakfast like a king, lunch like a prince, and dinner like a pauper.” Here are just a few stories of international breakfasts fit for a king that we hope will inspire your own culinary adventures at breakfast time.
FoodTravel

We’ve all heard it: “Eat breakfast like a king, lunch like a prince, and dinner like a pauper.” I am a huge fan of breakfast and nearly every day begins with a substantial meal in my house. While working on materials for the Breakfast 101 toolkit for the Oldways Nutrition Exchange back in March, I asked some friends about memorable breakfasts they have encountered outside of the United States. Much to my delight, I received stories of people enjoying meals with friends and of family traditions, and stories that describe a much broader deﬁnition of breakfast than we are accustomed to here in the United States.  Here are just a few stories of breakfasts ﬁt for a king that we hope will inspire your own culinary adventures at breakfast time.

Lawrence in Hong Kong wrote about (and sent beautiful photos of!) his favorite breakfast of ci fan, you tiao, savory soy milk, and Shen Jian man tou. Ci fan are made of steamed glutinous rice wrapped around a ﬁlling of you tiao (Chinese donut), rou song (dried and shredded pork known as pork ﬂoss), and zha cai (pickled vegetables). 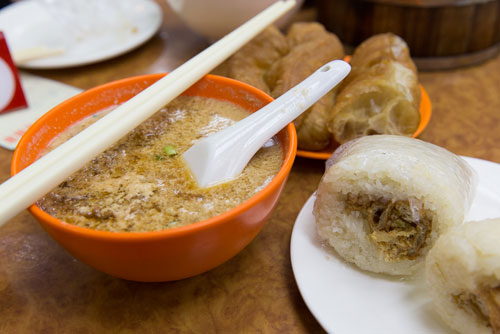 More pickled vegetables, you tiao, rou song, as well as cilantro and spring onions are added to the savory soy milk (made by adding a little vinegar to regular soy milk to make it curdle, as well as some soy sauce). And the meal also includes Shen Jian man tou, pork-ﬁlled buns topped with sesame seeds.

“I have eaten this meal since [childhood]…These are traditional Shanghainese dishes, so it is comfort food for me. When I was a kid I used to not like the savory soy milk but it grew on me. I love the texture mix of the ci fan. It’s chewy a bit with the glutinous rice, but crunchy with the Chinese donut. The crispiness of the pickled vegetables and the light ﬂuﬀy stringiness of the pork ﬂoss works beautifully together. It’s a bit of all tastes, too. The sweetness from the pork ﬂoss mixes with the sharp saltiness and tanginess of the pickled vegetables, covered by very fragrant rice. Yum!” (Photo credits: Lawrence Luk, © 2013) 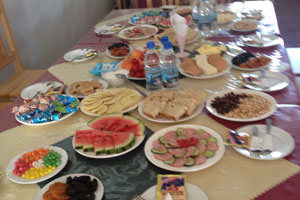 Jess, a friend from college, had recently returned from a business trip to Mongolia. She recounted, “Mongolian breakfast is a lot like their other meals—full of mutton! I spent one week with Border Guards in far western Mongolia. They went all out for us because we were guests…They had fresh fruit, dried fruit, various cheese products (made of yak or goat milk), fresh bread, and mutton sausage. The funny colored things [in the photo] are jelly beans. I have no idea why they [served] us jelly beans for breakfast, but it was pretty to look at. We also had a type of rice milk pudding. The amazing thing about these remote Border Guard posts is that they are completely self-suﬃcient. The Border Guard troops and their families are stationed out there for 3-5 years and can only depend on themselves. They grow all their own food—fruits, vegetables, and meat. They bake all the bread, butcher and cure the meat, and cultivate the land. They have limited gasoline deliveries and use solar and wind power. There is no running water, so water has to be carried from the well by hand.” (Photo credit: Jessica Soderbeck) 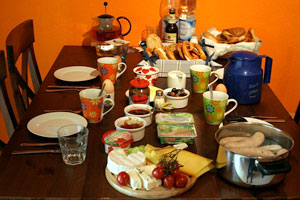 A few years ago I had the pleasure of enjoying an incredible breakfast on a sunny spring morning in Stuttgart, Germany. A young couple—Jochen and Asli—graciously hosted my husband Mike and me for two nights in their home. Jochen is German and Asli grew up in Turkey. Our traditional Bavarian breakfast included boiled eggs, Weisswurst (white sausage made from pork and veal), soft pretzels, fresh rolls, mustard, and Hefeweizen (wheat beer). But Asli also brought a taste of Turkey to the table with olives, fresh tomatoes and cucumbers, and soft cheese. The opportunity to share our relaxed morning in the company of new-found friends and experience their culinary traditions made for an indelible memory. (Photo credit: Mike Peluse)