I was sitting uncomfortably on a bus somewhere on the Amalﬁ Coast in the South of Italy. You could tell which passengers were American by the baggy eyes, drooping smiles and those who had a complete lack of interest in staying awake. I myself was curled up in a ball in my seat, unsuccessfully trying to form a cocoon to shield myself away from the rays of the sun growing brighter and brighter. My headphones and bug-eyed sunglasses did nothing to block out the sounds of rapid-ﬁre Italian and the ominous clanging and banging from beneath the bus that had me feeling less than conﬁdent. Again and again, I found myself asking, “Why? Why am I on this horrible bus on a Saturday morning, zooming around sharp corners, barely missing the colorful Vespas trying to squeeze by?” I’ll give you three (Italian) words: Mozzarella di bufala.  Otherwise known as buﬀalo mozzarella, this is a mozzarella cheese made from the milk of a domestic water buﬀalo and not from a cow. I got to meet some of these lovely animals immediately upon arriving at our destination, a buﬀalo mozzarella factory: 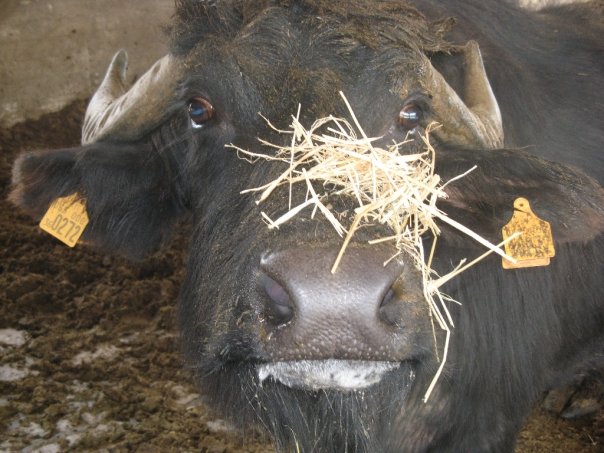 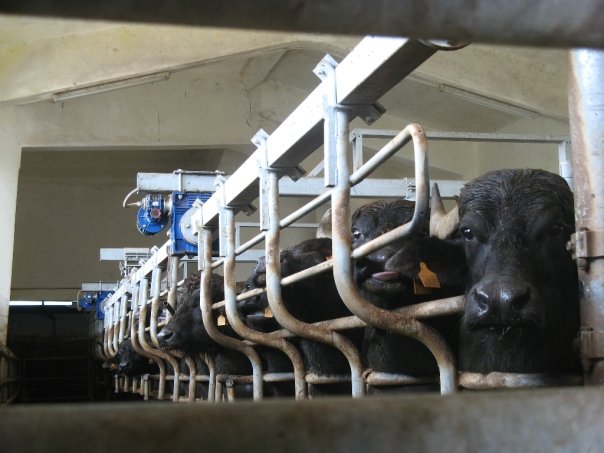 I remember that it was quite odd to keep referring to them as “buﬀalo.” In America, the word brings about images of caveman drawings and cowboys lassoing big, mammoth-sized beasts as they run across the ﬁelds of the mid-west while the song “Born Free” plays in the distance. As you can see, these guys looked like they should all be wearing a bell around their necks and answering to the name Daisy. The factory was blessed with a backdrop of acres and acres of rolling green hills that seemed to stretch right on into the Mediterranean Sea. It was the kind of green you see right before it rains, or on the ﬁrst day of spring after a really harsh winter. The only part of the land that wasn’t green was the pen where the cows…I mean, buﬀalo were kept, which was on a big plot of dirt. They could roam about and relax under the few trees that dotted the ﬁeld, but only when supervised. Their caretakers would lovingly pet them to calm them down during feeding time, and you could tell there was a real bond between them. The factory itself was much newer and much more modern looking than I expected. High ceilings, lots of white walls with no scuﬀ marks or spots. It seemed like a cross between a dentist’s waiting room and the hall of some important building. Once we were introduced to the staﬀ, a group of shy men with tans that you can only get from working outside 24/7, we went into the machine room to ﬁnd out how buﬀalo mozzarella is made… 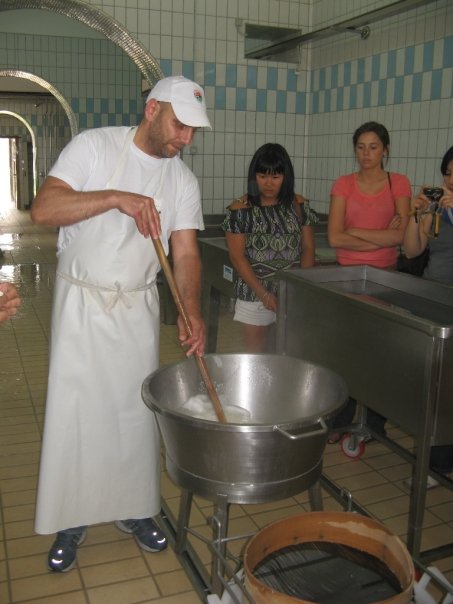 Made entirely of whole buﬀalo milk, it is inoculated with a starter culture of the previous day’s whey. After about 30 minutes the milk begins to coagulate and the cheesemaker breaks the curd into small pieces to ripen for 5 hours, after which time the curd is transferred to a boiling vat for stretching. It is sold either in baseball-sized balls, or in smaller balls called bocconcini…No matter what form it takes, mozzarella di bufala has a slightly sour tang that is oﬀset by a creamy, milky bite. (via)

And you can shape it into your favorite ladies hairstyle! 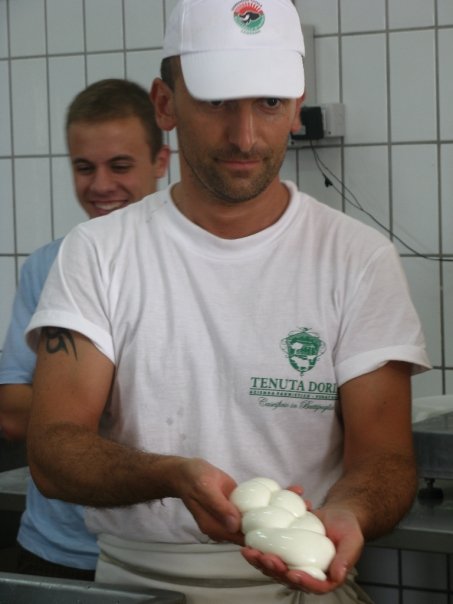 But seriously, that’s some superb cheese right there. It’s a lot more dense and watery than the mozzarella cheese we’re used to in the US, but buﬀalo mozzarella has a certain kick to it that keeps you coming back for more. It’s a staple of Napolitano-style pizza, and “is often served on its own, accompanied by a slice of grilled bread and perhaps a simple salad.” (via) 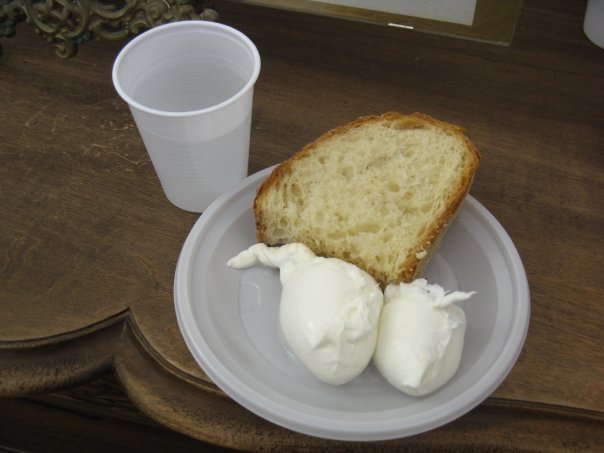 Believe me when I use words like “dense” and “heavy” to describe it. I ate both of those little mozzarella di bufala balls pictured above, but I felt like a ﬂoat in the Macy’s Day Parade right after. Am I glad I peeled myself out of bed after a hazy night out on the town to go ﬁll my stomach with buﬀalo mozzarella? Of course I am. I’ve searched high and low to ﬁnd something similar to this wonderful food here in the States, but I’ve come up short. If you ever ﬁnd yourself on a bus on the Amalﬁ Coast before the sun comes up, let me give you some advice: don’t be cranky. You might just be on your way to a buﬀalo mozzarella factory, and that’s a great situation to ﬁnd yourself in.  — Alison